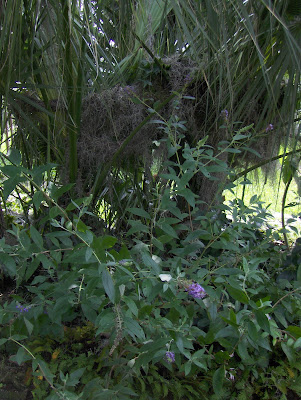 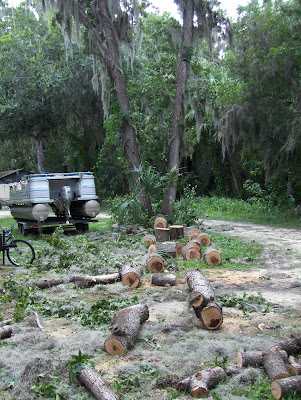 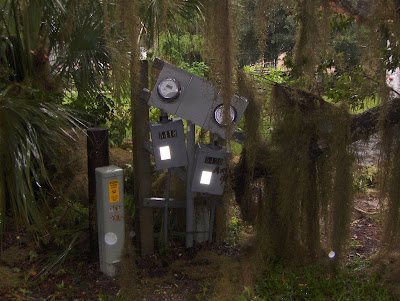 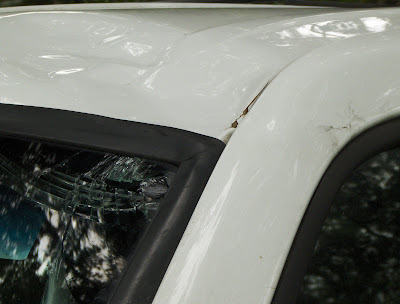 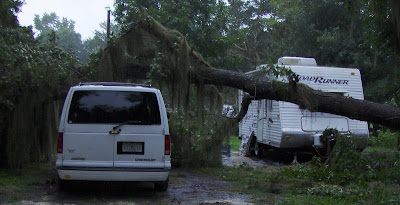 Tropical Storm Fay dumped only about 8 inches of rain here on Orange Lake. The water level has risen only by about that amount so far, but it may rise more over the next few days as the surrounding uplands and wetlands drain into it. McIntosh has a lot of swatches of Spanish moss (Tillandsia usneoides) lying around, plus small tree limbs and cabbage palm (Sabal palmetto) fronds. Storm winds were only ~25 to 35 mph, but they are causing me some grief, as evidently they hit me harder than anyone else in town.

A 17-inch sweetgum (Liquidambar styraciflua) broke about 2 ft underground and the tree fell toward my RV and van. It came to rest on five points: the tree's base and three limbs (bottom image), and the front left corner of the van (2nd from bottom). One of the supporting limbs smashed thru the power box framework and came to rest on top of the phone box after “hammering” it into the rain-softened ground a few inches (3rd pic). At this point I had lost electric power in a windy and drizzling rain, my van was helping to hold up a very heavy tree that could shift at any time, and my RV was blocked so that I couldn't move the RV to safer ground even if I wanted to.

Finally, a small limb fell across the fronds of a cabbage palm in a small garden. In the image (5th pic) you can barely see the limb due to the heavy Spanish moss, but you can clearly see the mass is a jumble of fronds, moss and wood. I started to pull it out of there, but then I remembered the time when Sleazeweasel, Ann, Bill and I were exploring the periphery of a polje in the Yucatan, Mexico, when we encountered just such a mass of detritus and vegetation (only bigger).

Sleaze told us it was a very snakey spot, and that we needed to study it until we spotted “the snake” that “must” be in there. Ok, fine, so we all pretended to study the stupid sticks when suddenly a snake crawled out of the tall grass and over my boot (6th pic)! It was a speckled racer (Drymobius margaretiferus), and I was impressed.

So, I just left the mossy log laying up there in the palms. It will make a good, new microhabitat in this generally snake-unfriendly neighborhood.
Posted by Buford Nature at 4:35 PM No comments: