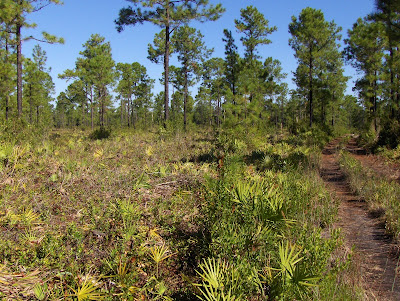 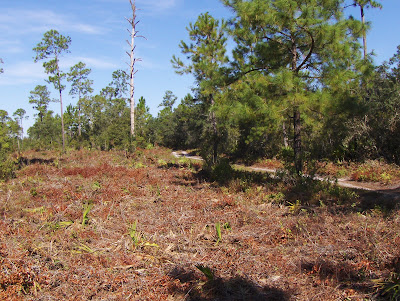 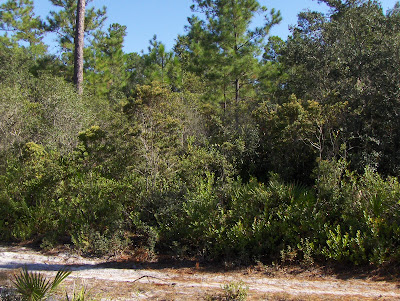 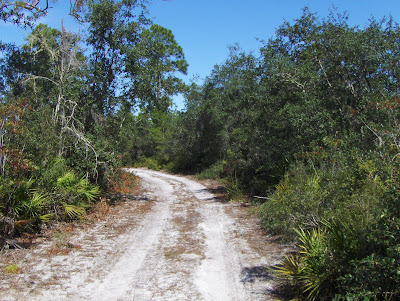 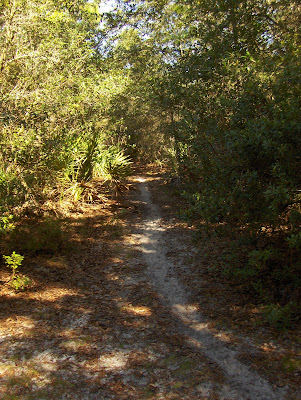 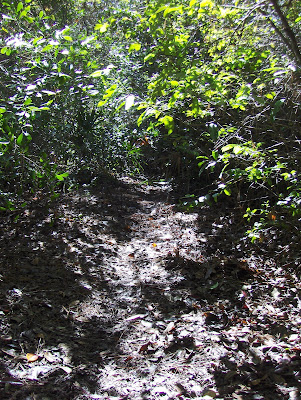 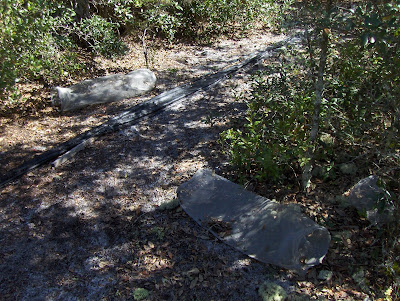 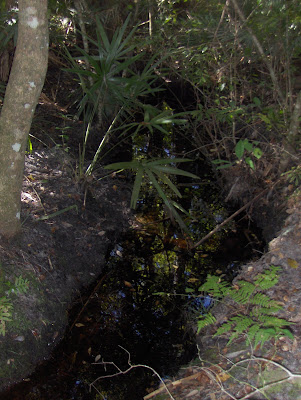 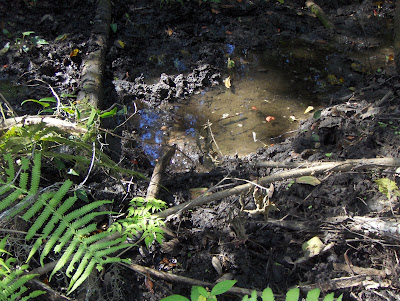 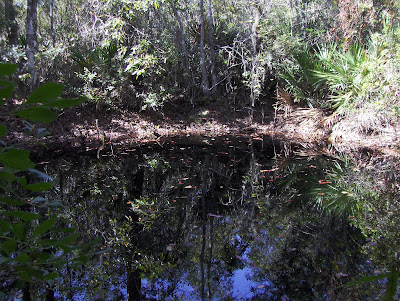 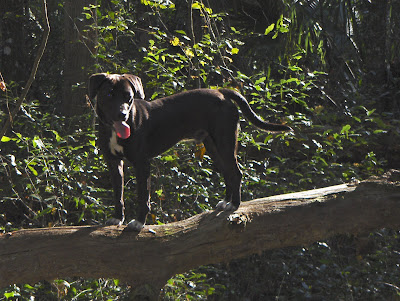 The property has been recently acquired and its boundaries were marked and dirt roads mowed, so it was easy to bike around. The first slide (from top) shows a wet flatwoods topography seen when first entering the property in the SE. Its thin canopy is dominated by pond pine (Pinus serotina), and it appeared that what was a subcanopy of scrub live oaks (Quercus geminata) and rusty lyonia (Lyonia ferruginea) has been roller-chopped. Immediately to the left of the dirt road you can see some of the undisturbed shrub cover composed of saw-palmetto (Serenoa repens), fetterbush (Lyonia lucida), dwarf huckleberry (Vaccineum myrsinites), broomstraw (Andropogon virginicum) and earleaf greenbriar (Smilax auriculata).

Photo two (2nd from top) shows the effects of the roller-chopper on the scrub live oaks and shrubs in the flatwoods. Presumably, roller-chopping is being done as part of an effort to restore the original character of the pond pine ecosystem. Photo 3 shows more detail of the undisturbed pond pine flatwoods; clearly, there is too much underbrush to perform a controlled burn, so roller-chopping seems to be a good start toward restoration.

As the topography becomes more ridge-and-swale-like, the ridges support a well-drained soil with a relatively deep water table. This is habitat for sand pine (P. clausa), scrub live oak, rusty lyonia, saw-palmetto, ... Sound familiar? Yep, it is almost the same flora as what dominates pond pine flatwoods, except for the sand pine (photo 4) and the far lesser density of low shrubs and ground plants.

As I followed an old road it petered out and became an extremely well-traveled animal trail (photo 5). Its surface was easily a couple of inches below grade, with abundant prints of dog (Canis familiaris) and/or coyote (Canis latrans), raccoon (Procyon lotor), feral pig (Sus scrofa x vittata) and whitetail deer (Odocoileus virginianus). I found scat along this trail and on the southern boundary road, large enough for a large dog or coyote, some filled with hair and others filled with persimmon fruit (Diospyros virginiana). This trail went through open stretches as in photo 5 and through tunnels underneath tangled brush as in photo 6.

I wondered how many other people had traveled this gymnastic route. You never know who's out there in them thar woods. Once, while wading through saw-palmettos on Long Island (between Big Talbot and Little Talbot Islands in NE Florida), I came across a diamondback rattlesnake (Crotalus adamanteus) that had been killed by a blow to the neck with a machete. The blood was still trickling down the side of the dead animal, so it had evidently been killed only a few minutes before. Where was the killer? Who was the killer? Was he watching me? I never saw or heard another soul while I was out there that day. Creepy.

Indeed, I was not the only person to have traveled that wildlife trail, as evidenced by a trap array set by wildlife biologists some time ago (photo 7). This array consisted of a line of plastic shade screen that was stretched out and held up by wooden stakes (now rotted and fallen), buried partly in the ground, with a series of aluminum funnel traps placed adjacent to the shade screen. The purpose is to capture small rodents, snakes, lizards and frogs - they encounter the shade screen and follow it until coming up to and entering a funnel trap. Funnel trap arrays are commonly used in Florida scrub habitats to sample for particular species of imperiled rodents and herps.

I wonder why they didn't remove the array? There were the skeletal remains of a frog or toad in one of the traps. One trap had a hole ripped into its side – evidently a predator wanted the catch within. Several other trap funnels had been reversed as though someone had done it deliberately, or a trapped animal had forced its way out. I rendered all the remaining traps inoperable so that no more critters would be killed by them.

The SE corner of the tract has a borrow pit that has become a well-vegetated pond (photo 8). Perhaps only 50 percent open water, the pond's marsh supports grasses and sedges, plus a pretty, a mass yellow flowering of a tickseed (Coreopsis sp.). Large mats of a macrophytic alga or other plant cover the benthic habitat of the pond. The only birds I saw here were the Eastern phoebe (Sayornis phoebe) and red wing blackbird (Agelaius phoeniceus). Mosquitofish (Gambusia affinis) and a hard-shelled turtle (Chrysemys sp) were common.

Small blackwater streams drain the southern and eastern portions of the property, exiting under I-75 and then eventually discharging to the northeast into Tuscawilla Lake. Photo 9 shows one of the creeks, incised through the sandy clay soil. These creeks usually have wetland trees growing along their banks, including sweetbay (M. virginiana), swamp tupelo (Nyssa biflora var. sylvatica), swampbay (Persea palustris) and red maple (Acer rubrum). The little palm beside the pictured creek is a needle palm (Rhapidophyllum hystrix). It is almost impossible to walk alongside the creeks due to dense, often thorny lianas and shrubs. Perhaps someday when the overstory of the creek and adjacent hammock are more mature, the route will be easier.

Feral pigs are a scourge of Florida's wetlands and wetland-upland ecotones. For example, photo 10 shows a portion of a creek that has been mucked up by feral pigs. Fortunately, Florida's wildlife authorities recognize the problem and allow hunters to to kill them without limit. This practice has significantly reduced their population in Florida as near as I can tell.

Photo 11 is a small sinkhole or borrow pit within a stream wetland. It probably makes a good watering hole for wildlife.

The northern part of the site appears to drain internally, but I was unable to find roads or trails going into that region to see.

The last photo is a “tuxedo” (mostly black with some white) dog that started to chase me away from his home, but I befriended him and he decided to follow me all the way from the northern side of the tract southward to my van. When I finished putting my bike and gear into the van, the dog jumped into the vehicle and sat down as though he is used to riding home in cars. Now it was time for me to take him home! I clearly heard him say, “Home, James.” So I drove him home.
Posted by Buford Nature at 2:53 PM 2 comments: