Last Sunday I explored in the SE part of San Felasco Hammock State Park that lies north of Millhopper Road. I parked in the hiking parking lot and rode my bike 1.5 miles east along Millhopper, darted into the woods and hid the bike. The day’s goals were to explore the highlands-karst transitional zone in sections 7 and 8, T9 R19. As usual, I found clear water streams fed by seeps, sinkholes and feral pigs. Following one stream northward to Blue’s Creek, I then turned ESE and followed Blue’s to Fox Pond, a recent addition to the park.

The total hike was about 7.6 miles, and I gotta tell you that I am soooo glad I pedaled 3 miles or I would have had to walk over 10. I have been ranging further and further from the trailheads, both hiking and biking, and am nearly at my sore feet’s limit. There may be places in San Felasco that I never get to see. Oh, the sorrow!

I am calling the first creek I walked down Needle Palm Creek in honor of the large, glossy, abundant palms at the toe of the feeder seeps and along the first quarter-mile or so of the stream. Here is a pic of Needle Palm Seep with attendant palm: 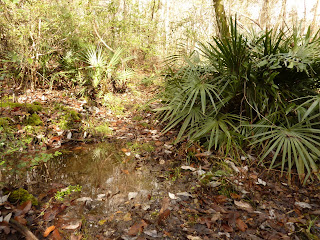 These seep streams join other seepage discharges to form a second order streams. This is where I ate lunch beside three log bridges: 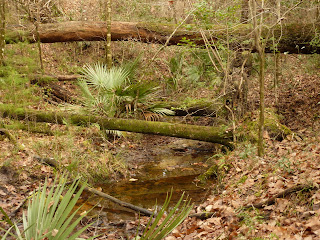 I ran across several sinkhole ponds containing water, buttonbush and graminoids that were evidently just right for cricket frogs (Acris gryllus) and spring peepers (Pseudacris crucifer) to form mating choruses. Man, were they loud! I flushed a few deer along the way, including this one-antlered male that patiently waited until my camera was ready. He then he let me take exactly one picture before he bounded off: 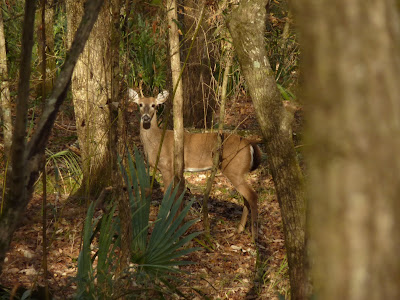 The pigs I encountered were not too afraid of me. My current MO is to pretty much ignore them as I walk by so they will neither see me as a threat to attack nor a hunter to fear. My plan is to be able to get close to them without fear of injury so that one day if/when I get permission it will be easier to cull them.

If you want a walk of solitude, I can assure you that these SE creeks are rarely visited. Along the shoulders of their ravines are game trails that you can easily find and walk. Oh, it won’t be a cake walk – there is plenty of brush, fallen logs and vine tangles, but for the most part, it is wild and pleasant.
Posted by Buford Nature at 5:01 PM 8 comments:

Yesterday a couple of fellows and I explored some woods that are an extension of San Felasco Hammock. I had come prepared for a trek around the property to look at its sinkholes and hammock slopes, printing out 2ft topo and aerial photos. My friends just wanted to wander around at random, however, so we missed seeing a lot of the tract’s karst features. I will return.

The topography here, like that of the state park, is transitional between impermeable highlands and limestone depressions, having remnant highland ridges and flat-topped hills (mini-peneplains? tepuis?). The latter drain via seepage slopes and stormwater runoff treatment ponds discharging through first and second order streams into the sinks. The forests on site are highly disturbed. Remnant longleaf pine sandhills are overgrown with laurel oak, loblolly pine and greenbriar. Some of those old longleafs have catfaces where turpentiners gathered pine sap. This one is particularly large: 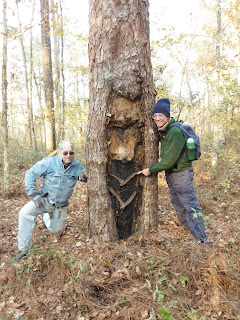 When we started out for the day, ice in the cattle trough was three-eighths of an inch thick. I felt sorry for the robins that couldn’t get a drink, so I broke the ice for them. It wasn’t too unsurprising, therefore, to find a second-order stream in the woods that was frozen over wherever the sun didn’t shine: 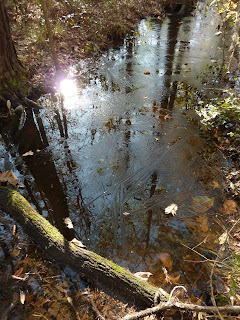 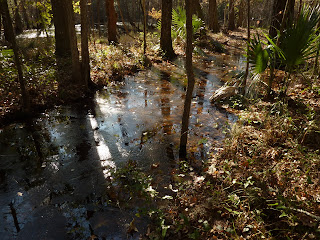 I need a break from San Felasco. I think I’ll go back to the Goethe Tract next weekend in an area that I have not had an opportunity yet to explore.
Posted by Buford Nature at 11:31 AM No comments:

It has been colder here for longer than it has been since the 1980s, according to a wag I heard on the weather channel. A few days ago the water outside froze in the pipes and I didn’t have running water until 11am. Perversely, today I was able to do my morning shower and constitutionals, and then the water froze at 11am! Hunh?!?! It has remained below freezing or just above that for three weeks now. I dream up day adventures to go out on, and then return to my cozy home and read or write something instead. I worked on a proposal all day yesterday to plant quality hardwoods on a spoil island in order to reverse a trend toward becoming dominated by invasive exotic trees. Before that, I continued writing my masterpiece.

This morning I read an article at Science News on iron and phosphorus being the current limiting factors on phytoplankton photosynthesis in the Atlantic:
http://tinyurl.com/yjbt72y

The article stated that wind-blown iron picked up from the Sahara is deposited largely in the North Atlantic where it unleashes phytoplankton growth and photosynthesis. The South Atlantic, on the other hand receives no such iron and so it does not have as much primary productivity as the North Atlantic. Then I remembered that a couple of years ago a hurricane occurred in the South Atlantic for the first time in history, and I wondered if the two phenomena were related. After all, denser phytoplankton should intercept more solar energy at the ocean surface and heat it up more than adjacent waters having less phytoplankton, and hurricanes are born of heated oceanic waters. Therefore, is it possible that Saharan iron aggravates hurricane formation in the North Atlantic?

Back to the cold - my garden has been planted according to a calendar made available by our local land grant university:
http://edis.ifas.ufl.edu/vh021

I began following their recommendations last summer, each month planting only the crops they recommended for my locale and planting them during the months they recommended. And the garden has been producing a steady stream of fresh organic veggies ever since. Lettuce harvests are waning but broccoli is being harvested almost weekly now, little-unharmed by the freezing weather. 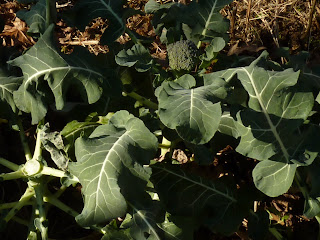 Scallions are always there – just go get some whenever you want. Oregano, anisette and cilantro are almost-daily harvested and used in dinner. Cabbage appears to be a month away from harvesting. Sweet pea vines are about a foot long and are on hold until there is a little more warmth. Garlic, and yellow and red onions are coming along nicely. I planted the Brussels sprouts a couple of weeks ago, and boy are they hunkered down from the cold! Down but not out – they are still green and appear undamaged by the nightly nips. Yeah, broccoli and cabbage leaves look a teensy bit wilted, but they are not damaged. The point is that every time I follow the calendar’s advice, it works, and I bet your state's land grant university has a calendar for you. Fresh veggies in summer, autumn and bitter winter so far. It doesn’t get any better than that. Kudos to UF IFAS! I only regret that the garden is not larger. Oh, and there’s NO insect pests to worry about in the winter.

Come on-a my house, I’m a-gonna give you veggies…
Posted by Buford Nature at 10:54 AM No comments:

I ran across the banner NASA photograph and a very interesting, unexplained occurrence today at http://earthobservatory.nasa.gov/IOTD/view.php?id=38721

Start with a relatively warm upwelling that thaws, thins and cracks the ice, creating a mix of ice floes and open water in a restricted area that remains surrounded by thicker ice. Add a moving air mass, probably a cyclonic system (larger than a tornado, smaller than a typhoon) passing over the lake or close by. Winds caused by the storm and experienced on the lake will "clock around," say starting from the northwest, then becoming northerly then northeasterly then easterly in turn. Sailors know this phenomenon well. Such winds can steadily push ice floes initially to one side of the upwelling, compressing them into a denser mass, slowly rolling the mass around within the hole in a clockwise direction over the course of the storm event. If air temperature drops during the storm, the aggregated floes can refreeze together into a single mass that grows larger by accretion of adjacent floes, rather like rolling a snowball in fresh snow to make it larger.

This theory can explain several things observed in the NASA imagery: (1) the rolling ice mass is off-center in the hole, (2) ice floes are larger and presumably thicker in the center of the rolling mass, (3) there is a nearly complete ring of semi-open water around the perimeter of the hole and (4) there is a concentric ring-like appearance in floes around the hole propagating outward at least a full hole diameter to the north-northwest.

Because the rolling mass is pasted a teensy bit south of west on the west side of the hole, the wind was likely blowing from 85 – 90 degrees east of north when the NASA image was taken, or the wind had ceased to be a controlling factor after those conditions ended and new surface ice formed.

The theory does not need the upwelling to produce circular ice thinning, and indeed this hole is irregular in shape.

As for the upwelling, geothermal inputs may not be needed in this case. Ordinary wind seiche under northeasterly or easterly winds could produce an upwelling in this, the southern tip of Lake Baikal.
Posted by Buford Nature at 6:16 PM No comments: