It isn’t enough to just go wandering around in the woods. Oh, don’t get me wrong, I do love to wander aimlessly at times, but a full sojourn simply must produce treasures. I guess it’s a holdover from my youth, looking for Easter eggs. Yesterday, I again went hiking in San Felasco Hammock Preserve State Park, my favorite park in the whole world. Walked a total of 8.9 miles, and my legs feel it!

The main goal was to get a gps track on the last mile or so of Blues Creek. The creek does not show up on aerial photos due to its small size and density of the forest cover, and I want to assemble a map of such park features. As I pulled into the Millhopper Road trailhead, I spied my long-time friend Bob S and a group of birders coming out of the woods. Turns out Bob was finishing an Audubon trip that he led. After the rest of his group left, he, Mike, and I headed south to find a bluejack oak (Quercus incana) because Mike had never seen one. After searching in vain for one, we headed back to the trailhead and they drove off, and I struck out on my official mission to the north.

It took a little less than an hour to reach the end of my last recorded track of Blues Creek, and I followed it from there to where it drains into the earth at Little Otter and Big Otter Sinks. The hike beside Blues Creek does not have a trail, not even a wildlife trail alongside it, so it was a bit of a bushwhack. Fortunately, briars and spider webs were rare, and mosquitoes absent. That latter is odd considering that water levels are up out there and all the perched sinkhole ponds contained a foot or more of standing water. But I will not look a gift horse in the mouth.

Along the way to Blues Creek, I was able to add another 30 sinkholes to my gps collection of San Felasco’s sinks, which now totals almost 350 in number. I hope that putting all the park’s sinks on a map will enable me to tease out some of the karst hydrology of the park.

I spotted a fern of unsure identity along the way. I am fairly familiar with the ferns in this region, so a new one on me is almost certainly a rare one around here. It keys out to the genus Polystichum. I didn’t think it was either of the two species in that genus listed in Atlas of Florida Vascular Plants, but two knowledgeable fernatics, Alan and Jose, both tell me it is Christmas fern, P. acrostichoides. It doesn't look at all to me like the Christmas ferns in the mountains, which, contrary to these Florida ferns, are evergreen, bigger, darker green, longer-leaved, and more robust. Oh well, I have a lot to learn about ferns. Here are several pics of the plant: 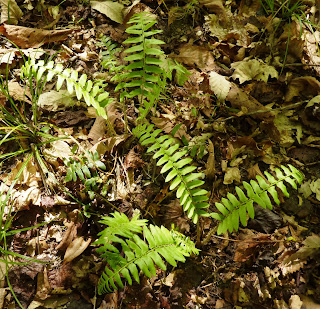 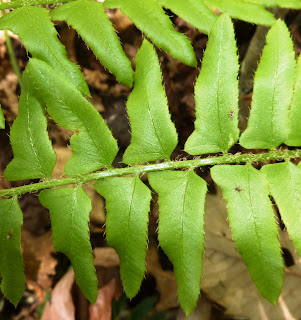 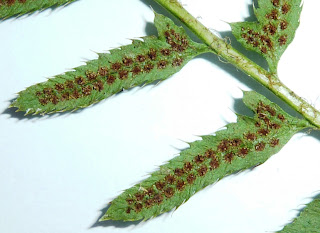 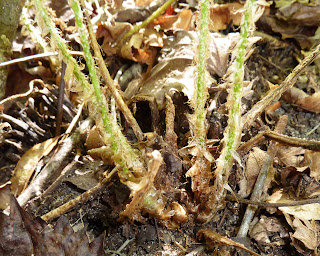 Posted by Buford Nature at 12:34 PM No comments: