As if two blogs weren't enough, I have started a third blog called Emerald Trappers:
http://emeraldtrappers.blogspot.com/

The Intro tab (which is also the blog's first post) of the Emerald Trappers blog explains the blog, which is to be the mouthpiece of a new non-profit company called Emerald Trappers, Inc. In a nutshell, the mission of Emerald Trappers is to own and use remote-controlled feral hog control equipment on private properties within a 12,000-acre project area inhabited by feral hogs. The project area includes San Felasco Hammock Preserve State Park, Millhopper Geological Preserve State Park, Turkey Creek Hammock Preserve County Park, an Alachua County Trust natural area, and a City of Gainesville natural habitat tract, plus residential, commercial, and agricultural zones.

Check out the Emerald Trappers blog if you are having feral hog problems. There is new, game-changing technology that promises to be able eradicate feral hogs if followed correctly. Hopefully, federal, state, and local governments will adopt it and restore our public natural areas. Of course, support for the new approach is up to you. Please let your local natural-area managers know which side of the feral hog equation that you are on.

Posted by Buford Nature at 11:05 AM No comments:

My Intro to Game Cameras


I bought a game camera and have been practicing with it in my yard in prep for field work this winter on the Emerald Pendant Feral Hog Removal Project. So far, the raccoon, opossum, common crow, gray squirrel, and whitetail deer have been snapped as they foraged around my kitchen scrap “compost” pile. Here’s five whitetail deer (Odocoileus virginianus) that couldn’t have posed any better than they so graciously did: 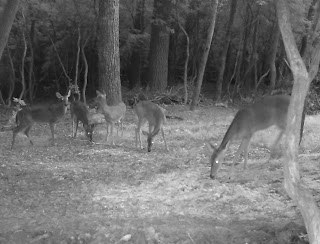 That’s the best photo the Moultrie D-444 game camera has taken for me. Most of the small animals in the photos are blurry, as they are quick and the camera evidently has a long shutter speed (but I cannot find that spec). It also has a long wake-up time and long interval between shots, 15 sec in each case, reducing the number of second and third chances at photo-ops. Nonetheless, it captured several shots of the slowly grazing deer, enough to think that there probably are five in that group, and even smaller, faster-moving animals are identifiable to species based on who is known to occur around here. These facts suggest that this camera will be sufficient to characterize feral hog sounders. We shall see. Below are the best pics of other animals it collected, in color by day and B/W at night. They illustrate both what is blurry and what is clear. 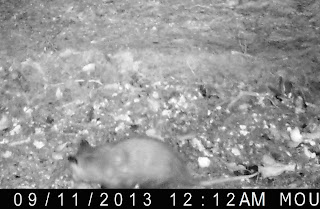 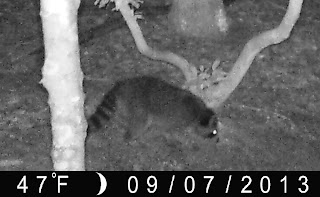 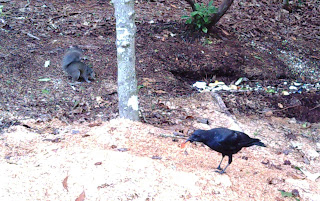 The camera has been set on its simplest settings to obtain all the photos above, so today I set it in 3-shot mode. I’ll move up through the more-and-more and faster-and-faster modes, and get into its video capabilities in a week or two. I want to become familiar with each capability of the camera by the time I return to Florida in early October so that I can start tracking feral pigs just as soon as my RV’s umbilicals are hooked up.

Posted by Buford Nature at 10:53 AM No comments:

The Bat and Viral Disease Conundrum


I read a News & Analysis article in the journal Science (30 August 2013, vol. 341, pp. 948-949) entitled Link to MERS virus underscores bats’ puzzling threat. It seems that bats carry more viral diseases than they are supposed to, and more than their share of the dangerous ones like Nipah, Hendra, SARS and its predecessor, Ebola, Marbourg, Australian bat lyssavirus, rabies, KasokeroDuvenhage, and Menangle.

Scientists have put the blame on a variety of causes like hibernation, bat immune systems, and even echolocation! Others think the reasons are simply their high numbers and lifestyle.

One reason often cited is the high number of species of bats – more than 1300 species, or a fifth of all mammal species. More bat species means more parasitic species means more virus species means more diseases – simple biology. Angela Luis published an enumeration of rodent and bat viral diseases, finding that bats harbor 61 and rodents 68, yet there are roughly twice as many species of rodents as bats, so perhaps there’s more to the matter.

Bats are on all continents except Antarctica, are abundant, can fly, some species migrate up to hundreds of miles, maternity colonies contain huge numbers of densely-packed bats and susceptible young, and species intermingle when roosting and hibernating. These factors force them to be exposed frequently to viruses, often at high levels of contamination.

I like another factor that was not mentioned in the Science article, and that is the microhabitat conditions within ceiling pockets, or bell-holes, occupied by bats during warm-month daytimes. Bell-holes are upside-down, bowl-shaped pockets in the ceilings of caves, and can vary widely in size up to a few meters with depths of up to a half-meter or so. A typical bell-hole is about a third-meter wide and half that deep. Bats often occupy bell-holes, and I suspect that bats are responsible for their creation via the same actions responsible for making bell-holes favorable for transmitting viruses.

A bat flying up into a bell-hole to roost grabs the ceiling with its claws and holds on, thus creating an opportunity for mechanical erosion of the rock. The bat breathes out warm, humid air that is slightly acid due to carbon dioxide from respiration, and contains water vapor, aerosolized water droplets, and viruses. This relatively warm mixture of gases and particulates rises up into the bell-hole and its acidity eats away at the rock, enlarging it beyond what claws and hydrology also erode. I don’t know how long viruses can survive outside the bodies of bats within bell-holes, but I suspect that the bell-hole micro-environment might sustain viruses at least a little longer than cold cave air would.

A much more complex process is proposed by Linfa Wang that invokes bat immune systems. Wang’s group sequenced the genomes of a small insectivorous bat and a large fruit-eating bat, and found that both were missing a hunk of DNA that senses microbial DNA and initiates an inflammation response. This might make bats more susceptible to disease.  Wang thinks that the high energy demands of flight caused the release of metabolites that damaged DNA so much that bats evolved special DNA repair mechanisms, but bats suffer less damage from them because their immune systems use some of the same molecules that are also involved in DNA repair. In other words, a genetic coincidence results in bats being more vulnerable to infection but less vulnerable to serious disease and death. Wang’s hypothesis is rather complex compared to simpler environmental explanations, and Occam’s razor shaves me, but it will be an interesting story to follow.
Posted by Buford Nature at 5:43 PM No comments: