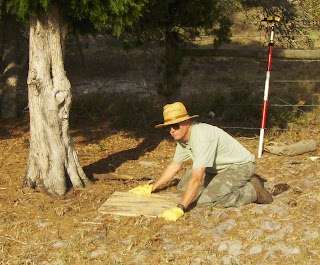 My work lately has been transitioning from field surveys for crested caracara (Caracara cheriway) nests to presence/ absence of sand skinks (Neoseps reynoldsi) and bluetail mole skinks (Eumeces egregious lividus). The two skinks occur only in sandy, xeric habitats on the state's central ridge, primarily the Lake Wales Ridge unit of south-central Florida. Both species are thought to be declining in population as a result of agricultural and other land development, and are thus protected under state and federal laws: http://www.fws.gov/verobeach/images/pdflibrary/sask.pdf

The accepted methodology for xeric skink surveys in Florida utilizes the cover board, which is a 2ft x 2ft sheet of plywood or particle board placed on the ground in promising herp habitat and checked every week or so. The idea is that cover boards imitate natural items like logs and rocks that herps like to hide under. We do not use treated wood as we think it would repel wildlife.

The small sheets we use may be too small for large snakes to hide under, but they attract skinks and a lot of other species. Checking a board consists of lifting up the board and looking for animals and/or their sign, and then using a potato rake to pull up any animals that might be in the soil down to a depth of 4 inches (10cm) or more.

Setting out the boards was hard physical labor, carrying as many as is reasonable up and down steep, loose-sand hills, then clearing out leaf litter and laying out the boards under the hot sun in mostly citrus groves. The second week's work was not much easier, as I had to clear out roots from beneath the boards so that potato rake tines would easily pass through the soil. Now, during the third week, the boards are laid out before us and are properly “cultivated,” so checking them now is relatively easy and kind of like an easter egg hunt.

Based on our work, I can report that these citrus groves have healthy populations of various ant and antlion species, plus the asian roach, american cockroach, palmetto bug (a roach) and cricket. Occasionally, there is a scorpion or centipede under a board. I encountered a black widow spider (Lactrodesmus sp.) under one board, but most of the spiders found are not so infamous. Where leaf litter has not been assiduously removed from beneath a board, rainwater trickling in will result in a musty mini-irruption of fungal hyphae, and no herps.

I have seen several species of rodents under the boards, including the cotton rat (Sigmodon hispidus), cotton mouse (Peromyscus gossypinus) and probably Florida woodrat (Neotoma floridana). They dig resting “forms” and short tunnels immediately under the board (the board is the roof). Usually a mammal will dart away the instant its cover is blown, but occasionally it will be so surprised that it will hesitate for a second, and then I can get a fair look at it. I never rake under those boards, not wanting to mess up their excavation efforts.

The ability of cover boards to concentrate herps (reptiles and amphibians) is pretty good. Sooner or later, cover boards will reveal most of a habitat's ground-dwelling amphibians and lizards, and many of its ground snakes. By “ground,” I mean an animal spends most of its time on top of the ground and/or within the soil.

The eastern narrowmouth toad (Gastrophryne carolinensis) and Southern toad (Bufo terrestris) are mostly found an inch or two under the soil surface under the boards. Some of them are found immediately under the board tucked into a blob of wet sand where rainwater had dribbled in.

Toads are especially easy to harm if one is too vigorous with the rake. Toads are relatively long and wide, presenting a large target to the rake's sharp tines. To minimize this impact, I rake firmly and quickly without jabbing the ground. This is another good reason to “cultivate” the ground under a cover board. Gratifyingly, since learning this way, I have caught two milk snakes (Lampropeltis triangulum) and numerous fat-bodied lizards without any visible injuries. 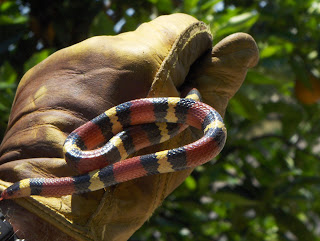 The two milk snakes were under separate boards about 75ft apart, and were completely immersed in the sand appx 2-3in under their cover boards. I had no idea the first capture was there although I saw unfamiliar tracks in the sand under the board that looked like something had searched under the entire board for something. The second time I saw those tracks I photographed them before raking for and catching the second milk snake.

Another day I found two juvenile coachwhips (Masticophus flagellum) under separate boards. Interestingly, they too were relatively close, being only about 150ft apart.

As you might imagine, we look for tracks, too, not just the animals themselves. And wouldn't you know it? The sand skink makes a peculiar and highly distinctive track as it “swims” just under the surface of the sand. The track is a pretty good imitation of a sine wave: http://tinyurl.com/cggtq8.

Antlion (http://tinyurl.com/d5dzqw) larvae commonly construct their funnel-shaped sand traps under cover boards. Although their tracks are the same width as that of a sand skink, their tracks are more irregular; nonetheless, an antlion track can look skink-like or intersect a skink track just to make things confusing: 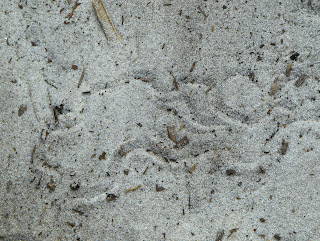 And sometimes there is no doubt that a track is NOT that of a skink. This is probably an antlion track: 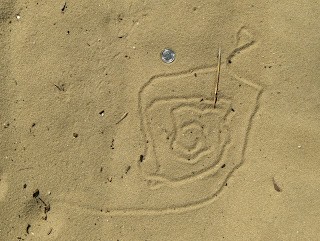 But although the occasional toad or snake, or antlion, are food for thought, lizards are the bread and butter of our cover boards. Six-lined racerunners (Cnemidophorus sexlineatus) and green anoles (Anolis carolinensis) quite commonly use the boards for respite from the heat of midday. Below is a racerunner that was semi-buried in a blob of moist sand at midday.

Most of the racerunners under the boards, however, are sitting atop dry sand:

I occasionally find the scrub lizard (Sceloporus woodi) under cover boards, although it is more common in the brush: 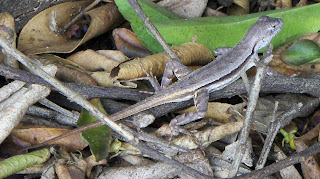 The most truly fossorial of all the herps I am finding is the so-called worm lizard (Rhineura floridana): http://tinyurl.com/cb7zgb. This little serpent is neither a worm nor a lizard, nor is it a snake, but is in the suborder Amphisbaenia. It is found only in Peninsular Florida in sandhills. The southern population, which we are encountering, may be an undescribed taxon (http://tinyurl.com/cceeup). Here is a photo of one of the (foot-long) captures:

I highly recommend the use of cover boards to anyone who wants to know what species of ground herps occur in a given area. Although the boards we made are of expensive new wood, you can make cover boards out of any old boards that have not been treated. Remember, many of the herps bury themselves and are not at all visible when you check the board, so be sure to rake, too.
Posted by Buford Nature at 5:14 PM