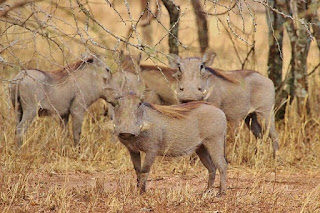 As you may know, the USDA has been working on a national plan to control feral swine (hogs, pigs), and I did my civic duty and gave them my two cents worth. Now comes a blurb from the news media that warthogs are on the loose in Texas and, oh by the way, that’s old news. Here’s one example: tinyurl.com/ncpgwa8.

Well, maybe in Texas it’s old news. I follow the feral hog situation because of my involvement in the Emerald Pendant project, but never once ran across warthogs in my literature review. Evidently, most if not all of these burrowing barrows escaped from high-dollar sitting-duck hunting reserves, although a few may have also been released by exotic-pig faddists. Apparently, it is not common enough to be widely perceived as an invasive-exotic threat, and may not even be reproducing in Texas yet. What is its potential to become an over-abundant pest? Well, the leopard and the lion and the Lango have all been unable to control them in Africa, and their cousin, the Eurasian boar, well, you know…

The common warthog is a savannah grazer, which means it prefers grasslands to forests and focuses on eating graminoids, but also eats roots, tubers, berries, nuts, crops, insects, eggs, and carrion. For sure, it will eat any herp it runs across. These are exactly the same foods that feral hogs eat. The warthog lives in sounders, like feral hogs, but unlike them is said not to occupy territories. If the latter is true, then warthog sounders could be more difficult to trap with the whole-sounder approach than feral hogs. One obvious biological error in the article cited above is the idea that warthogs are not nocturnal like feral hogs. Actually, hogs are indeed naturally diurnal, but become nocturnal where humans hunt them. There is no reason to believe that warthogs would not similarly adapt the shroud of the night. The warthog can occur in densities of up to 77 per km2, or 1 per 3.25 acres, but a more typical density is 1-10 per km2, comparable to American feral hogs.

The warthog’s gestation period is 5-6 months, far longer than that of the feral hog, so while the latter can have two or more litters per year at 4-8 young each, the warthog has only one litter of 2-4 young per year. If warthogs become established and strong control efforts are used on them, would the number of litters per year and number of young per litter increase in the face of significant control pressure? Research shows that feral hogs become more fecund when hunted and trapped, so warthogs could easily follow suit. The genes are almost certainly present in warthogs, as humans have bred super-fecundity into domestic pigs, dogs, sheep, and chickens, among others. Warthog birthing occurs at the start of the rainy season, which happens at variable times throughout the warthog’s native range in Africa, so it would probably adapt to American rainfall seasons.

On the bright side, drought and hunting with dogs can extirpate the warthog locally. Furthermore, the warthog does not have subcutaneous fat and its hair is sparse, so the warthog suffers in the cold; hence, the burrows. However, sparse hair and absent fat layers are possibly controlled by a single or few genes each, and if one (set) is the only thing keeping warthogs from breeding in the US today, then a single mutation could be a game-changer. Environmental stresses can force mutations.

There are two species of warthogs in Africa: the common and the desert, or Ethiopian. I don’t know which one is on the hoof in Texas, but the native landscape of the desert warthog is arid brushland and thickets, which sounds a lot like the Texas Hill Country. Regardless, there appears to be potentially suitable habitat in Texas and Mexico for both species.

Perhaps the USDA should focus a sufficient chunk of its national swine control resources on warthogs before they become as abundant and destructive as feral swine. USDA could fund genomic research on the potential for mutations that enable subcutaneous fat and/or denser hair. Research into the likelihood of warthogs acclimating to a nocturnal lifestyle may be warranted, although I think that can be assumed. Cage experiments could be done to see if warthogs can over-winter and reproduce in parts of America that rarely if ever freeze, such as north Mexico and the southern-most tips of Florida and Texas. Would warthogs burrow more deeply in American freezing zones than in no-freeze African zones, and if so, would that protect them sufficiently here? How deeply does fencing have to be buried to keep warthogs from successfully digging under and out? Even if the warthog is not territorial in arid and semi-arid environments, perhaps it would become so in wetter climates like east Texas and south Florida. Are there any other non-African locales where warthogs have been released, and if so, what has been the experience of local control efforts? The Mexican government might want to participate in any or all such research.

I reject the argument that their current status in Texas indicates that we should not make a meaningful effort to extirpate warthogs right now. I believe that their shaky toehold plus our experience with feral swine give us reasons enough to nip warthogs in the bud.

USDA spent a million bucks on an experiment to control feral pigs in New Mexico. Let me say that again, “A million-dollar experiment…” I think it was worth it, too, and believe that a program to eliminate warthogs from Texas costing less than a million bucks might be a bargain in the long run. I would also support passing the cost of warthog control onto Texas sitting-duck hunting reserves, as they are certainly the fount of the problem.
Posted by Buford Nature at 12:03 PM No comments:

From Ditch to Creek

I previously posted two reports about erosion control measures taken on my North Carolina house lot driveway. One was to this blog on September 12, 2010, about the stream crossing culvert (tinyurl.com/pt82u5r) and the other to my On Rappel blog on October 29, 2013, about the driveway ditch efforts (tinyurl.com/omgb8ve). The goals were to control erosion while simultaneously creating potential landscaping water features. I really won’t have time to do any serious landscaping until the house is built, but my efforts seem to have paid off. I hope this is apparent in the following before-and-after photos.

This is what the stream culvert crossing looks like now: 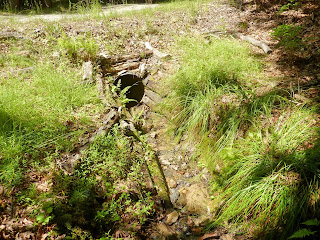 But this is what it started out looking like: 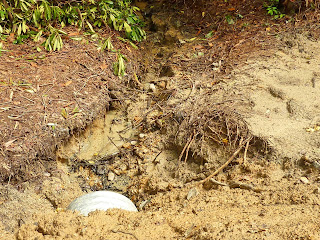 Ugly! You can see a lot of dirt exposed, with stream banks cut nearly vertical. I used a shovel to “bevel” the sides a little by removing the loose dirt and taking the overhanging root mat back away from the stream a foot or so on each side to reduce erosion. (Incidentally, there were a couple of ringneck snakes in the undersides of the root mat). I then placed small logs along both banks in the hope that not only would they retard the tendency to wash out the culvert but also provide a substrate upon which ferns, mosses, liverworts, and other plants could take root in and armor the ground: 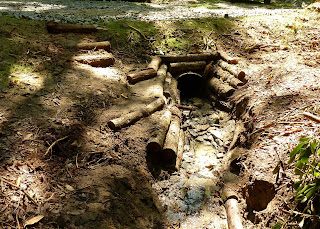 The idea was that plants would grow on and between the rotting logs and form a web of roots extending back into the creek bank dirt. Indeed, the first photo shows that the plants readily took root in the logs.

Driveway ditch erosion was of equal concern, and since the driveway runs straight up the hill, so do its flanking ditches. This is part of the west ditch right after I added short split logs to create riffles and pools (and after a rain): 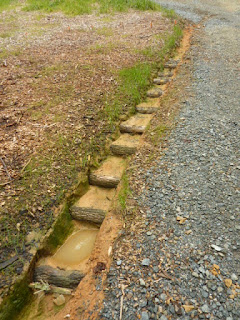 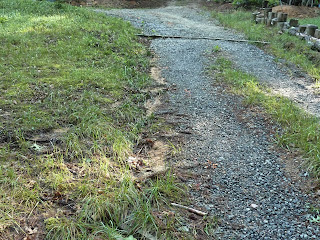 You cannot hardly even see the ditch anymore, as it has silted in and the split logs are completely buried. Much of the initial storm water now sinks into the grassy, sediments in and beside the ditch, and what does runs off will sheet flow until reaching an open-top culvert (bottom of photo).

This is the east ditch right after construction: 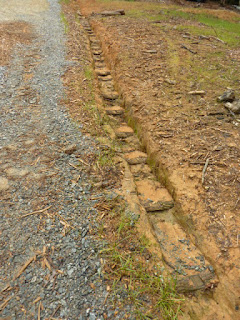 After several years of vegetative growth, the east ditch looks even better. It gets more runoff than the west ditch, which keeps silt from clogging the ditch, although leaf litter sometimes has to be cleaned out as is evident in the foreground: 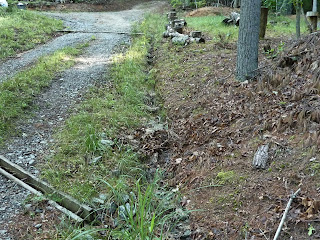 Overall, I’m pretty happy with the results.
Posted by Buford Nature at 1:16 PM No comments: