Onions are a Jones

I love to putter around in the garden just about as much anything. It is so good for the soul, this creation of food from "first principles." Weeds don't have a chance under the gaze of this gardener, although I transplant some of them to more appropriate places. Today I noticed that my grocery store ginger root had sprouted more roots plus shoots. Some folks would just throw it out, but a gardener will consider this a second bite at the apple. So into the garden it went, taking me only about 2 minutes to walk out and back and plant the little sucker. Maintaining a garden after it is set up is easy, taking only an hour or two a week to do the job including harvesting. Mother Garden nurtures me even when I'm on away missions, by provisioning me before the trip and chugging along in my absence. Here are my May harvests, ex radishes and snap beans that got eaten before photoed. Not a lot carbs, I'll admit, but maybe someday people will say, "Buford really knows his onions!" 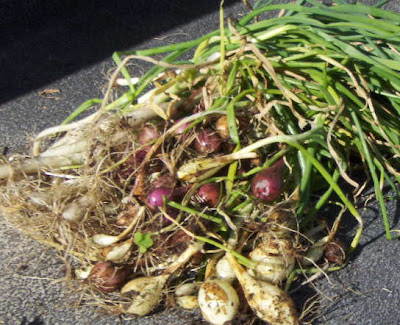 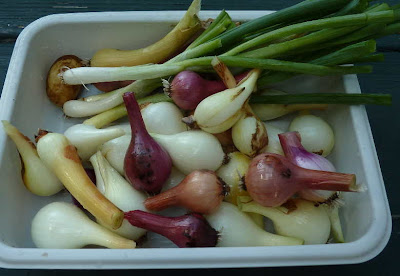 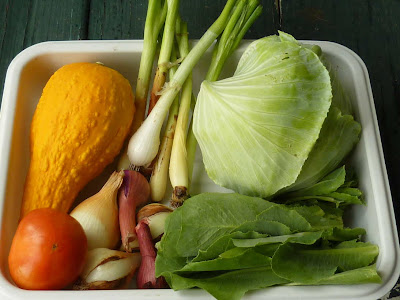 In the sidebar entitled, Cloned Neandertals Still in the Realm of Sci-Fi? (Science, vol. 328:682-683), Elizabeth Pennisi quotes several scholars as questioning why we would want to bring Neandertals back to life in the first place. I agree with them that it is wrong to do so to satisfy scientific curiosity, but suggest another reason: If Modern Man had a hand in the extinction of Neandertal, perhaps we owe it to them to bring them back? We were more brutal when they died out, and they were brutal, too, but today we are more paternal toward endangered species. Doubtless, if they were extant but imperiled, we would take steps to ensure their survival just as we are doing with other jeopardized species today.

There are, of course, other ethical questions to consider. The sidebar asked, for example, if it is ethical for a human surrogate mother to carry the fetus of another species, but we don’t even have to ask the religious world’s opinion on that one. Another ethical question that was not asked in the sidebar is whether we really want to force some Neo-Neandertals to grow up and live in a Sapiens world knowing of their species’ tragic fate. It could be heart-wrenching all around.
Posted by Buford Nature at 11:13 AM 3 comments:

I have not written to this blog in almost a month because of the intensity of my current field work, having been out of town and working 12 – 16 hrs a day since late April. It’s a grinding schedule, but the money and experiences are good. I have been primarily relocating gopher tortoises from the pipeline right-of-way (R/W), occasionally interspersing that work with searching for endangered species on small parcels. After getting only one day off over the past three weeks, I may be getting off today through Memorial Day, say “Hallelujah!”

The word, “relocating,” that I used above is a bit misleading, as it refers only to disposition. To be more complete about it, what we do is dig up gopher tortoises (Gopherus polyphemus) using shovel and backhoe and then move them out of harm’s way, either by releasing them elsewhere on site or taking them to an off-site preservation area. Before release, we collect a fair amount of information on the animals (e.g., weight, length) and use a scute-notching system to semi-permanently number them. Commensal species are sometimes encountered in the burrows and are allowed to escape, although capture and release on site is appropriate in some situations.

Along the way, I am working within my first union featherbedding experience. Only three people are needed to excavate the turtles: an “agent” that is a state-certified tortoise mover -that’s me; the “hole-jumper” - BrianM has been my assistant and a safety backup so far; and the backhoe operator – Joel, a “competent person.” The first day, there were not just the three of us, but actually ten people: we three essential fellows (sniff), two inspectors, four laborers and a foreman. From the second day onward, that number was pared down to eight! And all of us are men. I am reminded of a satiric imitation sea shanty that was played occasionally on the radio twenty or so years back that was sung by deep-voiced men in their best “row, row, row your boat” marching canter that started out something like this:

Well, let me tell you, the sandhills are a different kind of sea and the clanking of the backhoe is not exactly a chantie, and I can think of a lot of women I’d rather spend my working days with than some of those men.

Ok, let’s have some pictures…

Here’s a young indigo snake (Drymarchon corais couperi) that we dug out of a shallow armadillo burrow in a farm crop field where it was directly in the path of construction: 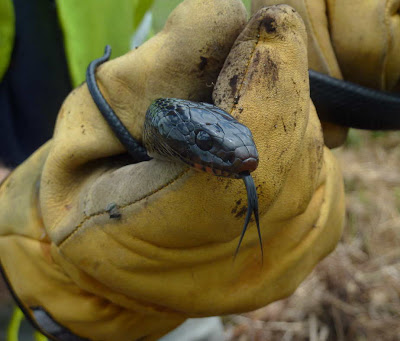 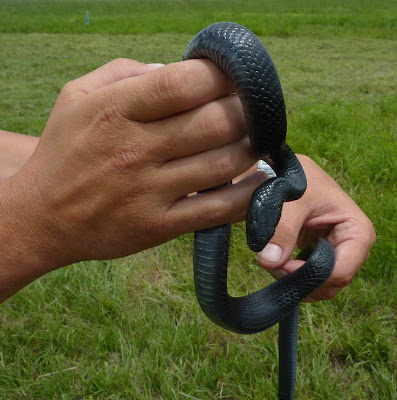 We took it some distance away from the construction area and released it into a ditch-side briar thicket. Of all the places I would expect to see this federally-threatened species, an intensively plowed and sprayed ag field is not it. But there’s more to this place than meets the eye. At first, one sees the recently-mowed field’s late summer weeds chopped and strewn about, and a series of ditches rectangularizing the former wet prairie. The ditches are overgrown with thick ruderal vegetation, including brush, briars and vines, while cattle and feral pigs wallow in wet puddles at the edge of the field.

But, looking closely at the ditch water, you don’t see the pea-green soup that ordinarily flows through Florida’s vegetable fields. Instead, this water is clear to the bottom and has thick growths of submerged plants. Where is this spring water coming from?

Being physiographic about it, we are standing on a once-submerged terrace that is flatter’n a pancake. Only a few hundred feet away is the eastern toe of slope of the Lake Wales Ridge, an extremely sandy “Plio-Pleistocene island” with a very steep gradient – my friend Tom Morris compares it to a loaf of bread in cross-section. Rainwater percolates easily through the soil down to the water table and then moves laterally to the toe of slope where it arises as a series of seepage springs. These, then, are the sources of the field’s ditch water base flow and where livestock bathe. Can you imagine how beautiful these springs and associated streams and wetlands must have appeared before being squandered on dirt farming? Truly, these are “pearls before swine.”

I propose that the public acquire a strip of land, perhaps only 200 – 300 yds wide, running along the toe of this slope where seeps are abundant that would exclude agricultural activities for the purposes of restoring native seepage spring habitats, providing for surface water quality protection and perhaps even adding to our portfolio of recreational wild lands. Protection of this strip of habitat would continue to provide water for ag operations, yet would remove only a tiny acreage from ag production. It would cost but little due to the small acreage involved and the fact that ag land is relatively cheap, especially these days. I propose to employ eminent domain if it becomes necessary to retrieve these tarnished jewels.

Ok, off the soapbox again, and now for some tortoise pics. Here’s a close-up one of one little fellow that was shedding some neck skin: 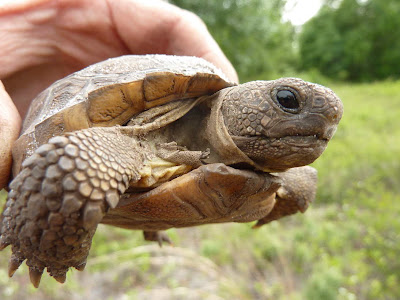 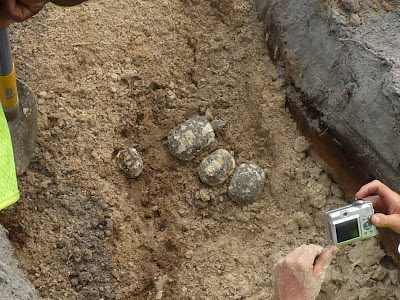 These four were caught and marked a few days before, but they found a hole in the silt fence and returned to their territories, taking shelter in the burrow nearest the hole. But fear not, gentle reader, as they were re-released outside of the R/W, and are known to be able to dig a new burrow in only 2 - 3 days. Gopher tortoises dig down generally at a 30 – 45 degree angle until they reach the water table, then level the burrow off and construct a nest chamber. Here is a shot of BrianM pulling an adult tortoise up out of the water that filled the nest chamber when rains elevated the local groundwater level: 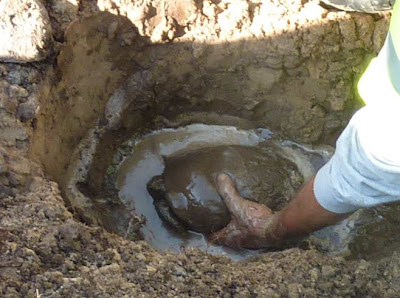