Swimmin' with 'gators and spiders, oh my!

Ok, lately I HAVE been having fun. One recent afternoon included swimming in a swamp braid of the Wekiva Spring Run where it crosses CR 326 in Levy County. A quick look at the situation where some of my buds were cooling off will give you an idea of the place: 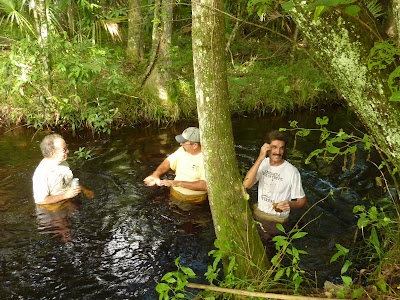 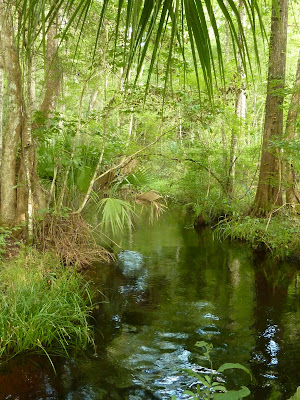 Of course, you have to be totally unafraid of alligators and cottonmouths to swim here. Bruce, Bill, Jon and I did so, but Lisa deferred. Um, you also should be unafraid of giant spiders: 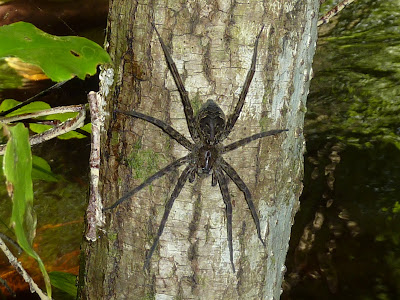 That tree it is on is appx 4.5 inches thick. Trying to id the beast, I found a site that has several fishing spider photos and the similarities are great. Thus, I think it is a Dolomedes in the family Pisauridae, otherwise known as fishing spiders, probably neither D. albolineatus, the white banded fishing spider nor D. triton. I found a video of a D. okefinokensi adult female, but the abdominal dorsal pattern is wrong and their femme does not have a white perimeter band:
http://www.youtube.com/watch?v=y1p8bx374nM.

Pesce on SpiderIdentification.org suggested it might be D. tenebrosus. Their pic, of a male, is very similar but does not have the white perimeter around the central black spot on the cephalothorax that ours has. That could be explained by gender difference or by individual variation? Unfortch, a bugguide.com range map does not depict it as being in Florida, but that map is obviously gappy. Various web sites claim it is North America’s largest spider. Davesgarden.com (http://davesgarden.com/guides/bf/showimage/2447/) has a bunch of D. tenebrosus pics, but all show brownish specimens without the white perimeter band. Our specimen is grayish.

The NC website has a pic of Dolomedes scriptus, and it is almost a dead ringer for our octopedded monster, except that theirs is a little browner and has a less obvious white perimeter band around the dorsal black spot:
http://www.carolinanature.com/spiders/spider2624.jpg. OTOH, the Wikipedia entry for that species depicts and describes a white stripe down the sides of the animal, in full conflict with the Carolina site. Egad! Will the real D. scriptus please stand up!

Interestingly, fishing spiders crouch on top of the water with the two hindmost legs anchored to a floating leaf or whatnot, and then plunge downward into the water while still holding onto the leaf to grab their prey, usually a fish or invertebrate, but I bet they will also take small frogs as their African relative, Ancylometes rufus, is shown to do in this video: http://www.youtube.com/watch?v=zv7YSEIOxwo&feature=fvw. Male fishing spiders are known to tie up the females with silk prior to mating. Hey, bondage is what I’d do if my ladies were bigger and hungrier than me!
Posted by Buford Nature at 11:22 AM