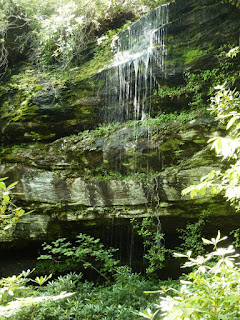 I have never liked the notion that fish eggs get dispersed via birds. The idea is that water birds somehow acquire fish eggs when they wade around in fish spawning areas and then transport the eggs to further water bodies. Sticky eggs allegedly adhere to bird feet and/or become trapped under feathers. It’s not hard to come up with other mechanisms, either, such as eggs being released from a dead fish when it is regurgitated by an egret feeding its young.

But none of those ideas wash with me. Sure, the eggs of some fish species are sticky, but lots of other species’ eggs are not and yet isolated water bodies can still have fish, even live-bearers. Indeed, the mosquitofish (Gambusia affinis), which is found in more aquatic habitats and more isolated surface water bodies than any other fish in the Coastal Plain, is a live bearer.

And the feathers of birds in the water are so tightly appressed that it is hard to see how eggs could get under them and hitchhike around. It is certainly reasonable to presume that some fish eggs get transported by birds, but it must be rare compared to the innumerable isolated water bodies out there harboring multiple fish species.

Then there’s the inconvenient fact that many small mountain streams and their little manmade reservoirs do not contain fish. This is because fish cannot pass tall waterfalls (and is the reason that salamanders are abundant and species-rich in the Appalachians). Furthermore, many reservoirs constructed here have existed for decades and are frequently visited by water birds, yet they do not have fish.

Thus, I welcomed the publication of research focusing on a review of the scientific literature that concluded there is no evidence for fish eggs migrating via birds (tinyurl.com/ya3m4whv). Fortunately, a lit review like this often sets the stage for experiments to prove or disprove a theory.  I can hardly wait!

The notion that fish themselves hitchhike rides on birds is even less likely than their eggs doing so. Water birds are largely fish-eaters and have excellent eyesight.

And then there’s the notion that fish can disperse via underground conduits. Sure, that can work with manmade culverts and to a lesser extent where streams running through vadose caves connect surface water bodies, but fish are much less likely to get around through phreatic cave passages. Nonetheless, the vast majority of isolated water bodies are underlain by dirt, which fish are totally unable to migrate through. Overall, the underground dispersal of fish must be trivial.

I believe that fish disperse almost exclusively by swimming. Many surface water bodies that today are isolated were connected in the past, which would explain how fish reached them. Less obviously, a connected wetland can fool the casual observer into wrongly thinking that it is isolated today; however, any competent civil engineer, geologist, or field biologist can spot tiny channels called “drains” that flow only during and immediately after storm events. Having been out in the woods in the rain numerous times, I can attest that many wetlands and ponds that look isolated are actually connected by tiny temporary surface streams during strong rain events during wet seasons.

I have personally seen several kinds of fish swimming upstream in such natural drains, including the mosquitofish and its taxonomic live-bearing cousins the least killifish (Heterandria formosa) and sailfin molly (Poecilia latipinna), plus bowfin (Amia calva) and various bream species (Lepomis spp.). I have also seen small fish swimming overland in the inundated ruts of a trail road that imitated forest “drains” during a downpour. Fish were coming from a river and going uphill to a series of small ponds.

Thus, I can think of numerous ways that fish can disperse by swimming, instances when apparently isolated water bodies are not actually isolated, and instances where fish do not exist in truly isolated places that are frequented by water birds. Case closed? Naw, now gotta prove it!

Posted by Buford Nature at 11:21 AM No comments:

There was a recent interview with Bob Simons in the Gainesville Sun (tinyurl.com/y856guk2) concerning an area in San Felasco Hammock Preserve State Park where someone had cut and killed woody vines (lianas). Bob said that the vine cut area was extensive and the cutting alarmingly thorough. The discovery caused quite a stir on a Facebook group that I belong to, so I phoned Bob to learn where the cut vines were located and last Friday went out there to see for myself.

I easily found the affected area that Bob pointed out thanks to his excellent directions and my own familiarity with the park. To map the impact area, I walked around its perimeter while recording the route on a GPS unit. Much of the cutting was obvious, with square-cut vines out in the open, whereas other cuts were hidden by a cover of detritus. After some exploratory prelims, I learned to (a) scan for large trees, (b) check their bases for accumulations of wrack (dead limbs and living and dead lianas), (c) walk over to each big tree wrack pile and look for cutting, and (d) look for cut vines along the way. Veiled cuts were unmasked by pulling on intact-looking vines to see if they were loose (some of the veiled cuts produced adventitious roots that made it to the ground and rejuvenated the vine). 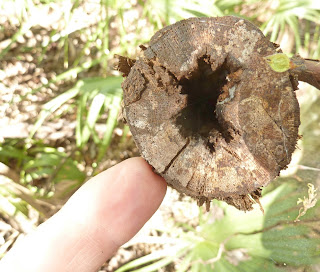 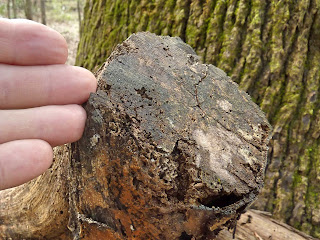 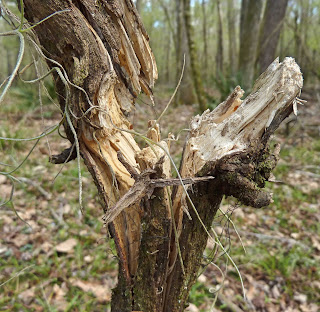 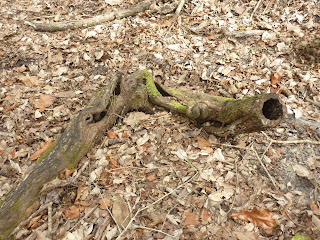 Afterward, the route and waypoints were imported into Google Earth (GE) and I did the best I could photointerpreting the area’s habitats from GE imagery, county topos, and my GPS route and notes. It is very difficult to map San Felasco’s upland plant communities based on aerial imagery, but I think the approximate impact acreage I got is close enough for current purposes. However, I only looked at the one area that Bob directed me to, and there are many such impacted locations at San Felasco. The red polygon is the area impacted and the white polygons are appx wetland edges: 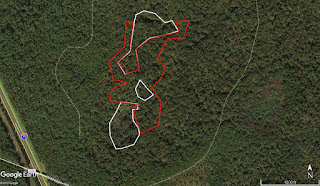 The cutting was done along the side slopes of the multiple-sinkhole blind karst valley in the mid-south region of the park on the north side of Millhopper Road. I estimate this single affected area at appx 22 ± 5 acres. The impacted slopes are dominated by a mature mesic oak-hickory-magnolia-sweetgum forest, whereas the karst bottoms are wetland and aquatic habitats that are essentially absent of lianas. The highlands immediately surrounding the impact area are also occupied by mesic forest, much of which is mature, but there is an earlier sere to the southeast. Only rarely did vines appear to be cut in the highlands and only occasional vine cutting was spotted beyond the core area.

Within the core area, nearly all the lianas that had made it up into the canopy were cut. It looked like the cutter wanted to kill nearly all of the large wild grapes (Vitis aestivalis, vulpina, and rotundifolia), about half of the large trumpet creepers (Campsis radicans), and none of the large poison ivy (Toxicodendron radicans) and peppervines (Ampelopsis arborea). All four of the encircled stems in this photo were grapevines: 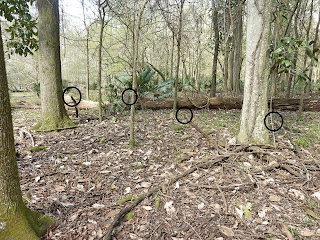 There were not as many vines in San Felasco’s undisturbed mature mesic forest as I had imagined, there being so few that it would be easy to count every single liana stem that made it up into the canopy. I counted in the impact area only five trumpet creeper vines and two individuals each of poison ivy and peppervine, although I could have missed some, and I counted only the large vines that ran up trees. Some of the areas peripheral to the impact area appeared to have no lianas or cut wrack whatsoever, either in wetlands or highlands. Were they naturally without vines or had their lianas been cut long ago and by now completely rotted away?

Cut vines were in variable states of decomposition, with some stumps looking like they were cut a year ago and others up to several, so the cutting appeared to have been done over a multi-year period. It is possible that the low density of lianas in adjacent highlands is an artifact of having been cut away so long ago that their remains have completely rotted away. If so, then the impact area could be significantly larger than my acreage estimate.

I wonder if the cutter has (had) a plan. First, deliberately leaving some individuals of all species indicates that the cutter was not trying to (a) eliminate lianas altogether or (b) extirpate any species. Rare canopy achievers (poison ivy and peppervine) were not cut at all, the more common trumpet creeper was occasionally cut, and grapevines were abundant and slaughtered. That is exactly what one might do if one wanted to reduce the impacts of lianas and increase their species diversity without decreasing their species richness. Secondly, liana thickets were left untouched, which could be due to either wanting to preserve a specialized wildlife habitat or just not wanting to tackle such a big job.

Third, possibly the healthiest large trumpet creeper I have ever seen was within the core area but not harmed. This one vine also provides a protective doorway at the fork of its two main roots for a small animal burrow. A man with a plan might deliberately spare such resources: 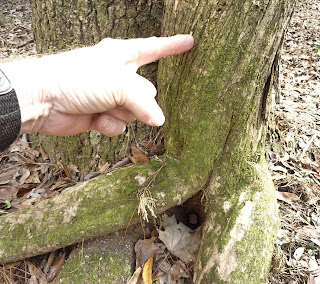 I wish now that I had paid more attention to the tree species that the trumpet creeper grew on to see if the cutter selected for or against vines based on the quality of the tree infested. For example, although the massive vine pictured above is clearly stressing a sweetgum, it does not cross over and encumber any other trees and I think many Florida naturalists would agree that this particular vine is more valuable than that specific sweetgum.

Clearly, more field work is required! In addition to looking further at the trumpet creepers, mature mesic hammock elsewhere in San Felasco needs to be scrutinized to see if the cutter has more than one haunt. I can justify one more day at San Felasco before migrating back to the mountains for the muggy hot months.