Only one of ten Torreya seeds from the 2010 crop given to me ever sprouted. It was a disappointing result, and other Torreya Guardians had a similar lack of success. Nonetheless, my single seedling grew vigorously, growing six inches that spring (2012) in Florida. It grew another two or three inches in the first three weeks in the pot at my North Carolina home, was planted in the ground in May, and at this writing is 21 inches tall. I think it likes it here in the Southern Appalachians: 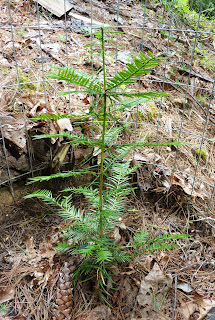 My 2011 seeds started off rather slowly. None germinated the following spring in Florida, and only three sprouted in July 2012, in North Carolina. Other Guardians reported similar results, and it looked like a repeat of the 2010 track record. But after only a month following their return to north Florida, in December 2012 another four seeds sprouted, in January 2013 another germinated, and the ninth seed germinated in February 2013. That yields a 90% success rate for the 2011 seeds, and again other Torreya Guardians enjoyed a similar pattern of delayed but successful germination. I gave two of my 2011 seedlings to my gardening friend Brack in Williston, FL, and planted another three (height range 9-10 in) at my NC place during the last three weeks: 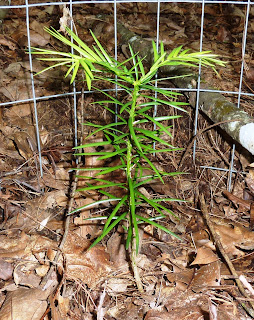 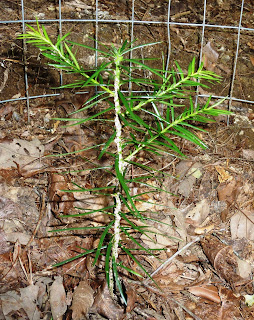 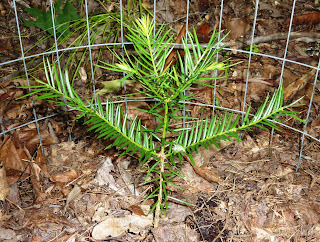 In case you are wondering about the deer exclusion cages, they are constructed of 2x4 inch mesh, 4 ft tall, 1.5 – 2.0 ft diameter galvanized steel fencing, and set a couple of inches into the ground so that roots will grow over the bottom wires to hold them down: 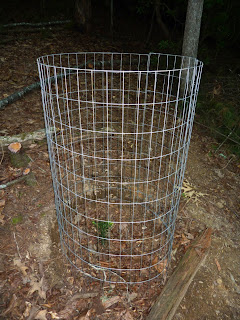 My four 2011 seedlings (height range 6 - 13 in) remaining to be transplanted are in pots protected by rodent exclusion cages: 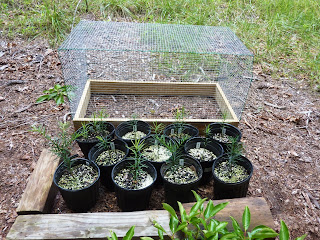 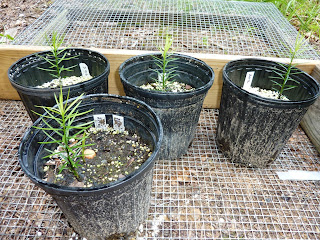 Those cages also contain fifteen seedlings from the 2012 crop of twenty seeds given to me. The 2012 seeds were small, pale floaters, quite unlike the larger, darker, denser 2010 and 2011 seeds. I planted four to a 1-gal pot (previous years had two per pot) in Florida, and by late April four of them had sprouted and were growing vigorously. Shortly after moving from Florida to North Carolina, a flush of eight sprouted during early June 2013 and another three have sprouted since then. That totals fifteen sprouted seedlings from the 2012 seeds, or 75%.

My Torrrya seeds tend to sprout in flushes of three or more at a time, and they tend to do so shortly after I move from Florida to North Carolina in the spring and then again to Florida in autumn. It will be interesting to see if any of the five as-yet unsprouted 2012 seeds will germinate when I return to Florida in November.
Posted by Buford Nature at 5:33 PM 1 comment: