Evolution of Wolf and Dog Behavior 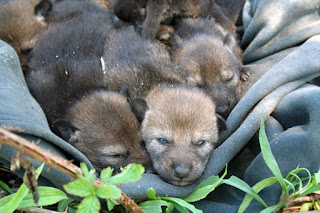 
Wolves are said to hunt in cooperative packs, but that generalization is not necessarily so. First, Farley Mowat (Never Cry Wolf, 1963) taught us that wolves in the Far North of Canada and Alaska hunt singly when raising pups. Secondly, the coyote hunts singly when raising pups and sometimes doubly as a mated pair, but also as a family pack when pups are large enough to join their parents to learn how to hunt. The latter assumes (as I do) that we accept the coyote as a subspecies of the timber wolf because their hybrids are fertile.

Similarly, domesticated dogs are often said to hunt singly, but that is also an over-generalization. Stray dogs are known to band up and hunt in packs, attacking people and other animals. Furthermore, feral and stray female dogs take their young on hunts.

It is commonly written that dogs evolved from wolves that hung out at the edges of human camp-firelight. The idea is that the friendliest and most cooperative wolves were favored by early hunter-gatherer humans, creating a positive feedback mechanism that augmented natural lupine sociability.

However, suppose that early wolves were more like their Far North siblings and lived in mated pairs. Then suppose that the early wolves that found human subsidies irresistible were forced to become more sociable in order to survive at the campfire perimeter. This is not an unreasonable scenario for at least two reasons:

First, dogs have been called neotenic (immature) wolves due to the dog’s physical and behavioral characteristics being very similar to those of the young wolf.

Secondly, the fossil record does not obviously record ancient dog and wolf behavior, so we do not know what either actually did. It is often said that bones fossilize but behavior does not. However, at least some of the consequences of behavior actually can be evident in fossilized bones. For example, a research project (tinyurl.com/lgpw6du) evaluated injuries to the preserved bones of California dire wolves and saber-toothed cats and found that wolves were more prone to head and neck injuries whereas saber-tooths were more prone to spine and shoulder injuries. The researchers then concluded that this was because dire wolves hunted in packs and attacked large hooved ungulates from behind and thus were occasionally kicked in the head and dragged by their prey like modern wolves. Saber-tooths, on the other hand, ambushed and then manipulated prey with their powerful back and forelimbs into such positions that their long teeth could deliver precisely aimed wounds to carotid and jugular blood vessels. Another finding was that saber-tooths sustained more injuries, leading to the opinion that they attacked larger prey and did so alone.

Thus, some behavioral patterns can indeed be teased from old bones. Similarly, research shows that food items can be deduced from tooth wear patterns, food sources can be determined from element isotope ratios, migratory patterns can be concluded from isotopes and wear patterns, and care for the injured and aged can be demonstrated in nursed skeletons. It is only a matter of time before there are enough skeletons and sufficient interest and funding to shed light on ancient wolf and dog behavior.

Today, I read of an interesting paper (tinyurl.com/ybwf4pyn) in BBC News (tinyurl.com/y9lssctg) that expanded on canine cooperativeness, which demonstrated that living wolves will cooperate with each other more than dogs will. I was not really surprised at this finding. I have read numerous technical reports on wolf-dog behavior in preparation for the second book I started writing, so I already believed that young wolves and adult dogs were less sophisticated socially than adult wolves. However, in reading this research, I have for the first time been struck by a more radical set of questions.

Instead of dogs alone evolving toward a human-associated existence and away from a lupine culture, is it possible that ALL wild wolves living in close proximity to humans have evolved more sociability and that the dog and wolf are both evolving alongside and toward human acculturation? Are wolves more social now than before humans evolved? Are wolves more social now than before dogs evolved? Is the Far North wolf culture the primitive state and the wolf pack culture a derived state? Did the wolf pack culture evolve as a consequence of single and doublet wolves gathering around human campfires where they had no choice but to become more social? We know that humans created the modern dog, but did we also create the modern wolf?