Bruce and I visited the western side of Sanchez Prairie last Saturday, riding bikes from the trailhead to the north side of the prairie, and hiking from there counterclockwise around the prairie’s edge and through its adjacent uplands and ravines to Moose’s Echo. The weather was clear, cool, and dry – perfect! Altogether, we biked and hiked 8.3 miles. I had already been over most of what we covered Saturday, but without my GPS unit, so I took that with us. The trails, roads, and sinkholes we encountered will be added to the map of the park’s trails that I have been constructing for the last several years. That map is almost complete and is far more detailed than the park’s own published maps. I intend to publish it here when it’s completed.

There are four ravines on the prairie’s western side, and all are vegetated with mature mixed forested hammock consisting of spruce pine, loblolly pine, live oak, swamp chestnut oak, Shumard oak, Florida maple, pignut hickory, sweetgum, laurel oak, sugarberry, Southern magnolia, red mulberry, persimmon, and others. Ravine bottoms contain all those species but are dominated by swamp tupelo, sweetbay, and red maple. This photo shows a typical scene within the ravines: 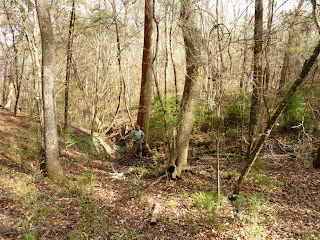 Here’s one of the forest’s Florida maples (Acer floridanum) with character: 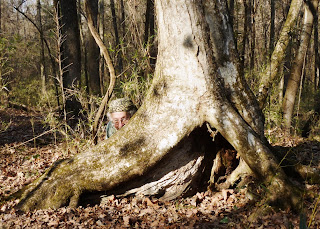 The four ravines are so karstic that they only occasionally, and only for short distances, exhibit signs of water flow. Their surface waters sink directly into the ground and thus into the limestone containing the Floridan Aquifer. Their headwaters terminate at semi-permanent seeps. Rain percolates through sandy Holocene surface sediments, down to the top of the impermeable Hawthorne formation (a sandy, fossiliferous, phosphatic clay), and flows laterally to the edges of ravines to emerge as nonartesian seeps. These little springs show us where the contact is between the two geological formations. More importantly, the seeps create excellent habitat for primitive plants like ferns, mosses, and liverworts: 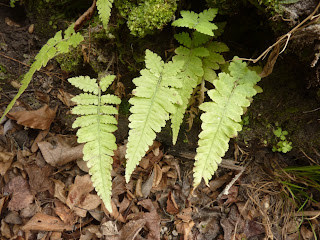 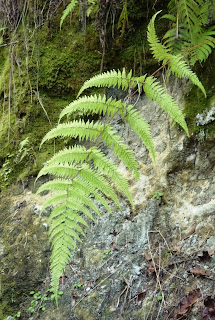 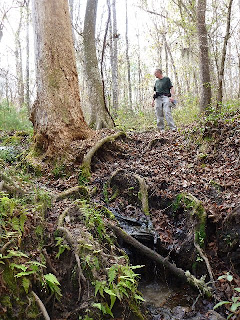 These beautiful ferneries, however, are also prime wallowing habitat for feral hogs. The nearly-permanent presence of seepage waters running over sandy clay evidently makes a good foundation for a feral hog wallow, like this one: 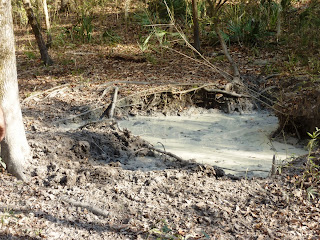 Feral hogs at San Felasco also make wallow-like depressions in clay banks that are moist but not wet. Are these mineral licks rather than wallows? Here’s one: 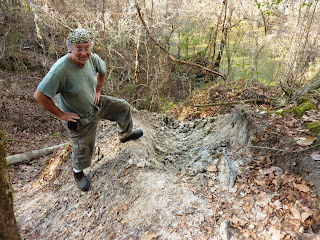 We spotted an unbaited feral hog trap in the uplands near the prairie: 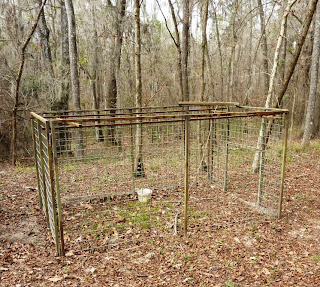 The entrance of Moose’s Echo Cave has changed since I saw it last year. A columnar slug of the Hawthorne formation sediments measuring about three feet in diameter by about six feet long was last year poised to slide down toward the cave’s entrance. It looked so unstable that I dared not enter the cave lest I cause the slug to collapse and cork me in. On the present trip, I noticed that the slug had indeed slid downward several feet, not to occlude the cave entrance but to land immediately beside and east of the cave entrance. A new cave vent opened up between the clayey cliff wall and the slug directly above the main entrance. It was too small for human entry. The cave’s main entrance and the new vent both exhaled cool airstreams. The cave’s entrance is still as unstable as it was a year ago, and again this year I dared not enter it. This is a shot of me standing on that slug, looking into the new opening and balancing on tiptoes in to keep from stepping on ferns (photo by Bruce J. Morgan): 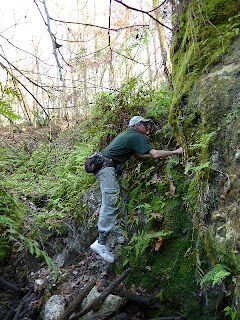 We saw at least one sounder of hogs. We saw them twice within fairly close proximity, both times within the prairie, so I believe they are likely to be two sightings of the same sounder. (A sounder of swine is composed of a dominant female and her young of potentially several generations; mature boars live alone and separate from sounders except when servicing females). Last winter I saw probably this same sounder passing by me while I was hiding in a blind, and I counted 20+ individuals in the group. On another occasion when I encountered them on a hike, I attempted to scare them away by making threatening gestures and noises. Most of the piggies squealed in freight and ran away, but the alpha female stood her ground about 50 feet from me, and doubtless would have slashed my calves with her tusks if I had pressed the issue. Properly chastised, I backed away from the confrontation.

Sanchez Prairie is a long way from any of the park’s trailheads, which is why I use a bike to get there. I consider it one of north Florida’s most ecologically-endowed poljes (large, wide, flat-bottomed, multiple sinkhole). Its forests are mature and extremely biodiverse, it has numerous kinds of plant communities, perched sinkhole pond habitats, and dry sinks, it drains into a karst swallet, supports hundreds of wood ducks during winter, is habitat for turkey, river otter and at least one nine-foot long alligator, has multiple ravines and streams draining into it, and I have never seen other people in there: 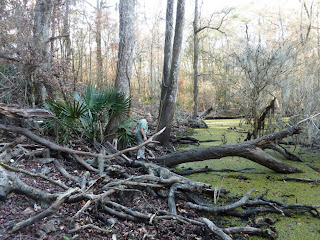 I wish we would eliminate its feral hogs.
Posted by Buford Nature at 3:37 PM