In January of 2011, I ceased posting to this blog and began posting instead to a second blog, “On Rappel!” I listed my reasons then, but they sound irrelevant to me now based on recent observations and conclusions. My guess is that about half my readership is composed of cavers, and that they probably don’t really care about non-caving blog posts. Likewise, I suspect non-cavers prefer not to search through caving posts for stuff about paddling or hiking. It strikes me that perhaps I should maintain two blogs, one for caving and one for non-caving. So, with that introduction, I’ll start the New Year for Florida Nature Adventures with the tale of my latest botanizing trip to find rare Florida ferns.

A few weeks ago, my friend “John” emailed to tell me that a fern aficionado from Spain planned to visit Florida to photograph rare ferns. Alan knew of some neat places containing uncommon ferns, and sent Jose (and me) a map that depicted a couple of locations to visit. John could not accompany Jose as he was planning his own adventure for the same time period. My own ability to identify ferns is embarrassingly primitive, especially with the genera Thelypteris and Asplenium. Since both genera contain species that were on Jose’s bucket list, I could not pass up the opportunity to have an identification expert teach me a thing or two. You can see the quality of Jose’s fern photography at his web site: joseluisperezcalo.com/index.html.

Early on Thursday, January 17, Jose met another person who showed him a population of Blechnum occidentale, a fairly rare fern in the US. A little later, he and I met at a parking lot for our first jaunt out into a vast low hammock somewhere along Florida’s western peninsular karstlands (it is a given that I cannot reveal online the locations of these rare taxa). We struck out through the woods toward John’s first waypoint through low hammock, a humid and diverse subtropical forestland dominated by live oak and other hardwoods. Gentle rain accompanied us on this and the other jaunt of the day, but we were prepared with rain gear. Along the way to our first waypoint, we spotted Osmunda regalis, Phlebodium aureum, Vittaria lineata, Thelypteris palustris, Thelypteris ovata, and Polypodium polypodioides, all of which are common Florida species. Here’s a pic of new Vittaria sprouts growing from the base of a cabbage palm: 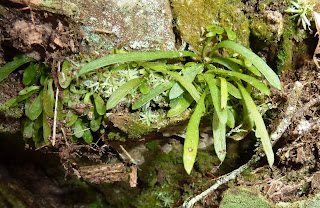 And a pic of the most abundant fern of the day, Thelypteris ovata: 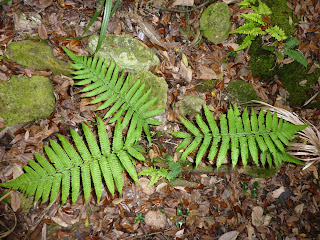 Reaching our first station, we saw numerous limestone rocks and boulders lying about on the surface, most of which were spotted or covered with ferns and bryophyte mosses. The commonest ferns on the rocks were Thelypteris ovata, Thelypteris dentata, and Thelypteris tetragona, among which we spotted our real quarries. The first was Pecluma dispersa: 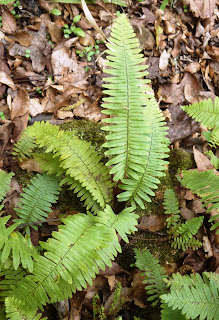 Then we spied Asplenium abcissum: 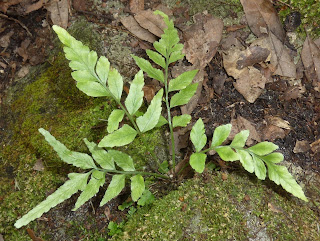 And then we found Asplenium cristatum: 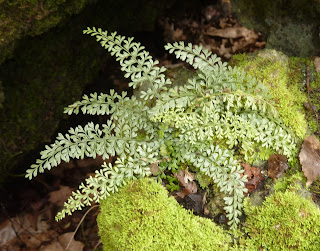 The latter three are fairly rare in Florida. Unfortunately, there was also a small patch of Boston fern, Nephrolepis exaltata, which is a dreaded invasive exotic. The only taxon that we didn’t see here that was expected was Trichomanes, a genus of tiny ferns whose foliage is only two cells thick. We hoped to find it at the second waypoint that John had given us, but we found no new species at the second site although we did add Pteridium aquilinum pseudocaudatum to the day’s fern list.

From there we drove a while to a restaurant serving frozen broiled grouper and a decent steak, and then continued on to our campsite where we spent the night in our vehicles. The next morning we arose a little after dawn to the screaming of a pair of red-tailed hawks. I had decided to take Jose canoeing to a site that John also knows about and had suggested in case we had time to do it. Unfortunately, I forgot to bring a few things. Without going thru the entire litany, I’ll just say that one item forgotten was the second paddle. But I had a shovel. Did you know that a shovel propels a canoe just fine? Did you know that you can scull with a shovel? But do you know how much heavier a shovel is than a paddle? Too, the current and chill wind were against us going to the next site, but what a nice and easy laze it was floating back! It should be noted that this was the first canoe trip Jose ever took in his life, and let it be known that he is a “natural” at it. Here he is at the bow of the canoe: 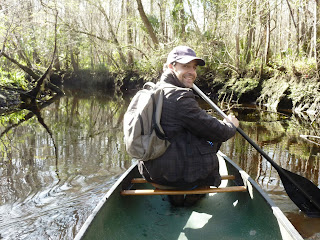 Our third site is a pedestal of limestone within a wetland, and nearly all its exposed rock is covered with primitive plants. This bryophyte shows its primitive leafy contribution to the evolution of vascular plants: 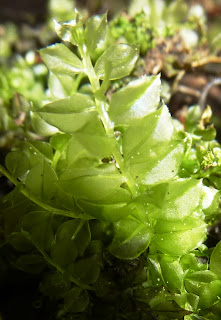 This habitat supports low hammock vegetation dominated by Shumard oak and Southern magnolia, with an admixture of cabbage palm, live oak, diamondleaf oak, Southern red cedar, and others. The ferns here are also dominated by Thelypteris ovata, while Thelypteris dentata and Thelypteris tetragona are common. Here we found Pecluma dispersa again, but also found Pecluma ptilodon var. bourgeauana. Below is a shot of the base of the latter taxon, showing its basal pennae in their characteristic shape and configuration: 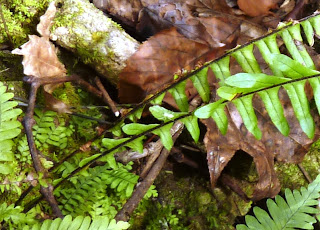 More Asplenium abcissum was found here, along with Asplenium cristata. A single specimen of possibly Thelypteris reptans was spotted: 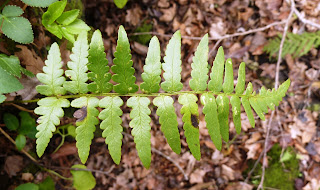 Another life fern for me in this place was Asplenium x curtissi, a rare hybrid: 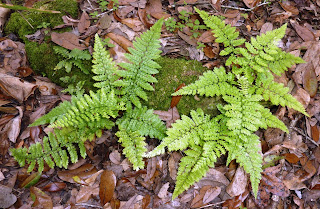 We also found a single specimen of Dryopteris ludoviciana, which was a new species for Jose.

The last time I was at this location, I spotted a single individual plant of Pteris cretica, a Southeastern Asian species commonly found around the world as a house plant, but on this occasion, I saw several dozen individual plants. I don’t know if it is considered an invasive species, but it is doing quite well in this little corner of Florida. However, it does not appear to be “taking over,” but instead blending into the fern community and adding to its species richness: 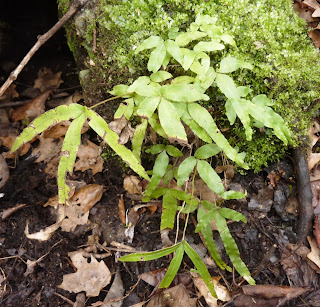 I had taken Jose to this location specifically to find Asplenium heterocroum, which I thought occurred here, but all the plants I had identified as such turned out to be Asplenium trichomanes. That was fine for me, though, it being a life fern, but I think Jose was a little disappointed. He certainly jumped at the chance to visit a fourth site where John and I had previously found and photographed Asplenium heterocroum.

So, we returned to the canoe to paddle back to the boat ramp. Along the way, we saw a Northern Flicker, which was a life bird for Jose and a species that I see only once a year or two. Then, right in front of the canoe was a river otter! The shoreline trees harbored many Black Vultures that were too lazy to wing off into the cold wind, instead letting their Turkey Vulture cousins be the early birds. A Belted Kingfisher flew rapidly toward us, chattering loudly, and landed on a branch only a few feet from the boat. Usually, they won’t get anywhere near canoeists. I have always admired the robustness of aquatic mosses, so was glad Jose pointed out the name of the common bryophyte pictured below as water willow, Fontinalis sp.: 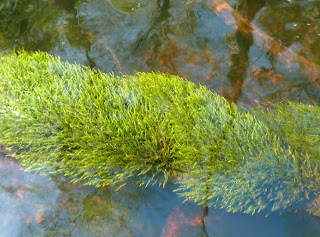 Back at the boat ramp Jose pointed out Thelypteris kunthii.We drove to a friend’s house and struck off a fourth time together through the woods, this time to a mesic hammock I have visited a hundred times before. I strode straightaway to a limestone outcropping I knew of, and there, among the very common Asplenium platyneuron plants, was the prize of the day, Asplenium heterocroum: 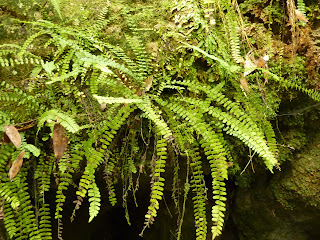 I had a great time counting 20 kinds of ferns over the two days, and I wish Jose the best of luck on the rest of his ‘fernatics’ vacation.
Posted by Buford Nature at 7:40 PM