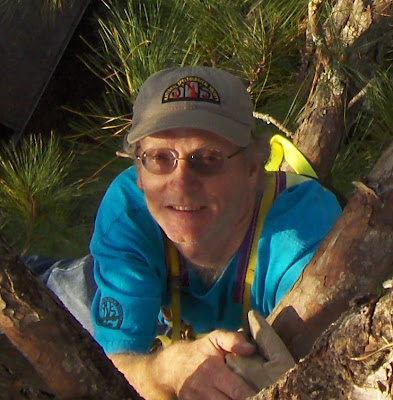 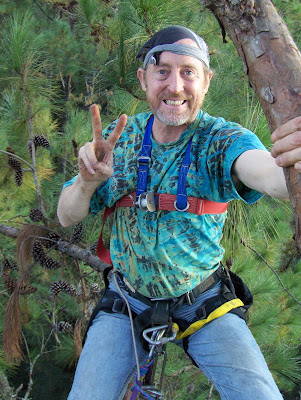 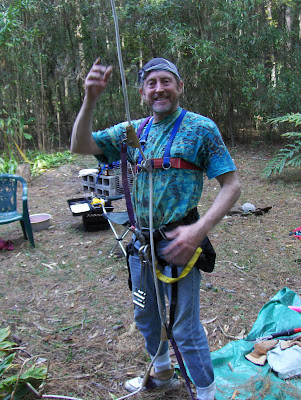 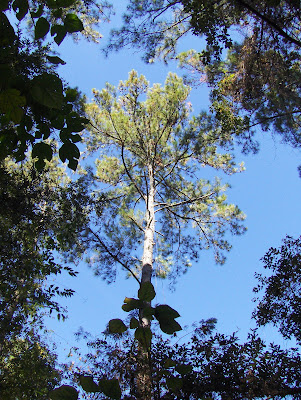 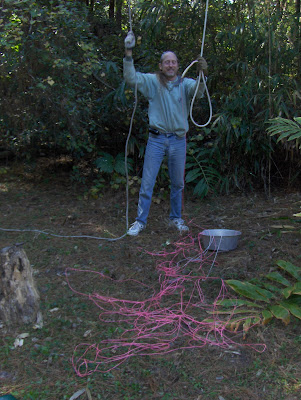 Some outdoors folk like to rappel down or climb up ropes in their sport hobby; including mountain climbers, rock climbers and cavers. My friend Chris is none of these, but he does enjoy reading while sitting in the canopy of a tall tree, so he wanted to install a rope stand in his tallest loblolly pine (Pinus taeda) tree. Chris knew that I had experience setting up rope stands so he asked me to assist and I readily agreed. I love to see the exuberance in people when they first experience their own first rope stand. In the pics, Chris is the one with the ear-to-ear grin.

Chris used a bow-fishing rig to shoot a 40 lb test monofilament fishing line over the base of a 4-inch thick limb right in the thick of the canopy – perfect! We used the monofilament to pull an eighth-inch braided nylon line over the limb, and then used the eighth-inch line in turn to pull up a 9/16-inch (11 mm) nylon kernmantle static rope (PMI Pit Rope) up over the limb and back down to the ground. We tied off one end of the rope to an adjacent tree, and left the other end of the rope hanging relatively straight down for climbing and rapelling.

I climbed first as Chris has but little experience with SRT (single rope technique) gear. Several small branches and rotten limb stumps had to be removed on my way up the rope. Also, I had to maneuver among several limbs from subcanopy trees that the rope passed through. Upon reaching the limb crotch where the rope draped over, I used about 10 ft of 1-inch tubular webbing and a carabiner to hold the rope up off the tree limb. This “redirect” reduces damages to both tree and rope, and allows Chris to pull the rope down at night while replacing it with a leader line.

Chris had borrowed the bowfishing rig and was totally inexperienced at using it, but his first shot could not possibly have been any better. It passed over the same branch high in the canopy that we ultimately chose to use to anchor the rope. Talk about beginner's luck!

We did not have a measuring tape today to determine the distance between the ground and the anchor carabiner up in the tree, but based on the known length of the rope and how much was left over when rigged, I estimate the total height of the tree is possibly in excess of 120 ft, and the ground-to-canopy-anchor almost certainly in excess of 100 ft, perhaps 110 ft. That would make it the highest rope stand I have participated in constructing.

I then ran Chris through the basics of SRT, using a spare set of my gear on the rope just a few feet off the ground. He would use ascenders to climb a few feet up, then change over to descending gear and rappel a few feet down. He did this exercise twice, at which point I decided he was ready to climb to the canopy. About 50 ft up the rope, he admitted he was a little scared, but he continued on up anyway all the way to the canopy. He whooped and hollered upon attaining the canopy, definitely a happy canoper.
Posted by Buford Nature at 10:15 PM No comments:

A 12yo girl named Amber and her parents are neighbors of mine. One person gave her a monitor and another loaned her a computer, and she wanted to hook up to the internet. Being unsuccessful, the landlady suggested she come to me for help. I mostly acted as an advisor while Amber did all the shopping and wiring and softwaring, and finally succeeded in getting herself on line. Good for her! She's a smart and resourceful kid.

Her parents thought to do something nice for me in return, so they invited me to have dinner with them before I worked on their computer one evening. The meal was steak, baked potato with sour cream and salad with blue cheese dressing. How did they know blue cheese is my favorite? The steak was lean and tender and the potato was perfect. Yum! I gobbled it up!

Amber's dad growls and barks and swears at his wife, daughter and pit bull every time he speaks to them in front of me, and loudly, too. Of course, he was polite to me that evening, so I talked as soothingly as I could. During dinner, Amber's mom reminded “everyone” that they didn't have to eat everything on their plates. Nevertheless, it was late, I was very hungry and had spent a couple of hours on the project, so I cleaned my plate.

Being preoccupied with chatting and watching TV, and eating, I wasn't paying attention to what everyone else was dining on. As we finished our meal, Amber asked her dad if he had saved her any meat and he replied “Hell no!” It sounded to me like he said it, not with anger, but more like satisfaction. Puzzled, I looked around at Amber's and her mother's plates and realized they were not eating steak. Only Amber's dad and I had meat that night; they had served me her mother's steak. Possibly, Amber might not get meat with her meals on occasion. What I thought was her mom's platitude about not eating everything was actually a plea to share, and I had missed it. Amber and her mom would have had some meat with dinner had her father been more generous and I more alert.

They don't make much money. Amber's mom is a maid at the trailer park, and I suspect her dad works at minimum wage jobs too. I had forgotten what it is like to grow up so poor that dinner might be sparse and “uneven.” I am reminded of a pride of lions, where selfish alpha males eat first and only afterward are females and young allowed to feed on the leftovers.
Posted by Buford Nature at 7:52 PM No comments: