As you can clearly deduce from the lack of recent postings to this blog, I just haven’t been having much fun lately. Oh well, I guess I’ll just have to synopsize an article recently published in the summer 2010 issue of the Wildlife Professional, which is the non-technical quarterly read of The Wildlife Society. The article is entitled “How animals send ‘tree mail.’” If the Camera Codger and Henry, two camera trappers that I greatly admire still read my blog, they and other camera trappers should pay special attention.

Cam McTavish and Michael Gibeau have written a marvelous piece about trees that are used by wildlife as marking posts to inform other animals about their presence. Their research was based on >16,000 camera-nights, plus winter-time tracks in the snow. As a result, these fellows have uncovered a hitherto unknown galaxy of behavior and camera trapping opportunities. As you all know, many species of mammals mark certain trees as a way to alert conspecifics (same species) and other species of their presence. It can be done to mark territorial boundaries, scare away competitors and advertise their physical prowess and sexual state, among other things. Here's a black bear-marked cabbage palm tree I photographed somewhere (I forget) that has some pretty deep claw marks: 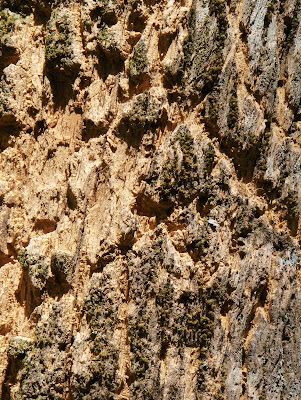 We have all seen trees and shrubs marked by claws, antlers and hair, and I have always thought such tree mail was aimed at their own species, but this is emphatically not so! Using camera traps, they documented that marks by grizzly bears caught the attention of mountain goats, for instance, some of whom then also marked the tree, and mule deer will go well out of their way to investigate scent markings. Some marked trees were used by up to seven species.

Any species or size of tree can be marked. Age, girth and bark roughness of the trees make no difference. They are typically found beside animal and human trails and along fire lanes, power line ROWs and, get this, seismic lines! Although aspect (facing direction) makes no difference, they are usually on the downhill side of the trail. Most commonly, communication trees are at trail junctures where many species would tend to cross paths.

In most cases, predators actively used (marked) the trees whereas prey species used them only passively (sniffing). Obviously, predators want to advertise themselves to and fend off other meat-eaters while prey animals just want to learn which killers have recently passed by and might be nearby threats.

Other interesting characteristics of active users are:
-) Scent marks are often made by individuals that are dominant over and tolerant of conspecifics.
-) Scent marking can synchronize menstruation in females of a species.
-) Scent marking affects socio-sexual behavior and conspecific fertility, thus possibly reducing aggressive encounters.
-) Because small species of felids scent mark primarily when they are sexually active, fertility may be suppressed when their populations are high.
-) The variety of methods used for marking (paws, claws, scent, hair, etc.) may pass on other messages besides the obvious ones like “I am here” and “I am looking for love.”

McTavish and Gibeau also point out that some marker trees have been used for generations, up to 150 years for bear in one instance, and conclude that the loss of these special trees might have adverse effects that have been overlooked. For example, such trees might be terrific locations to conduct long term wildlife research, or their loss might cause additional inter- and intraspecific confrontations among local wildlife. All I know is that when my favorite stores go out of business, I am as lost as a lizard on a piece of driftwood sailing out to sea. So we might want to sleuth them out and try to save them from the land manager’s chain saw, although I don’t think I’d want to chain myself to a predator attractor!

Remind me to tell you some day about Richard and the black bear rub tree on Mormon Branch in Florida’s Ocala National Forest. It’s a hoot.
Posted by Buford Nature at 7:47 PM 3 comments: