Independence Day means to me that “I am the captain of my fate, … my soul.” Sometimes I fool myself into thinking that I am independent … above it all … but everyone has a boss and there’s always a faster gun.

With afternoon temperature predicted to reach 99dF and little or no breeze expected, bicycling slowly in the shade of unimproved country roads seemed to be the order of the day. I was delighted to find a moderate-length (for me) back road loop from McIntosh to Micanopy. The unexpurgated version of the route is 17.5 miles; the abbreviated version looks like: 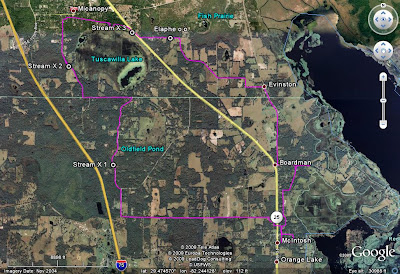 Despite it being a holiday, the route had extremely little traffic. I saw only one other bicyclist, at the outset. She was lithe and young, wearing black-and-yellow bike spandex and moving much faster than I, and she broke my heart. Much of the route is along low-maintenance, pot-holed limerock roads, but washboarding is rare and the elevations relatively flat. Here are a few typical sections of the path less traveled: 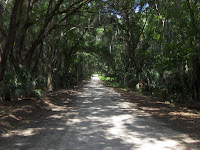 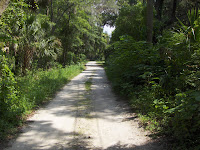 I am not sure what kind of nest box this is, spotted beside Avenue A: 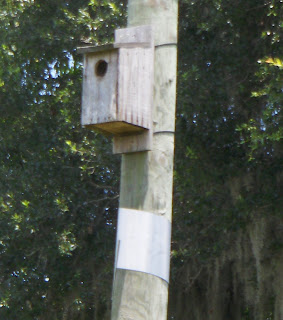 The entrance hole is appx 4 inches in diameter, a little large for the standard 3 inches for a kestrel or screech owl. It faces an open, short-grass field rising up in elevation from the nest box. I suspect it is intended for kestrels.

As I passed through Micanopy, I passed by County Commissioner Mike Byerly chugging down the lane on a serious riding mower. We nodded to each other as we passed in the shade. Biking eastward along SE Tuscawilla Rd (SE 165th Ave) I spied what I think is a relatively new recreation feature, Thrasher Park, which has trails and picnic tables on the north side of Tuscawilla Lake, and includes most of the lake, too. I dallied there, eating a snack and riding the trails. The latter appeared to have been mowed only moments before. Had Commissioner Byerly been out there mowing trails on his day off? I hear he’s that kind of guy.

Continuing on east of SR 25 (US Hwy 441) on SE 169th Avenue I spotted a roadkill gray rat snake (Elaphe obsoleta spiloides). I didn’t realize they reached this far south into the Florida Peninsula. Other snake catchers tell me they catch grays occasionally down here, but this was mine furthest south.

Most of the time, I want to bike and then hike beyond the end of the trail, but sometimes I just want to bike. This is a good route for a half-day Saturday afternoon ride.
Posted by Buford Nature at 7:41 PM 1 comment: