This 10cm sally was spotted on the exterior of a solar greenhouse at 3400ft msl in Henderson Co., NC, in mid-October this year. iNaturalist identified it as a Blue Ridge Two-lined Salamander (Eurycea wilderae). Note the dorsolateral lines fading into spots halfway along the tail for its specific id. Note the fabulous yellow of the belly for your admiration!

iNaturalist graphs it as most commonly sighted in early October. It is otherwise a shy creature (and my first ever sighting), yet was obvious against the GH wall. iNaturalist was short on reproductive habitats, but did say that it lays eggs in late winter to early spring. Therefore, my guess is that it had come out for mating, and positioned itself well above the ground where its belly would attract attention. Presumably, it is male, but I really dunno. 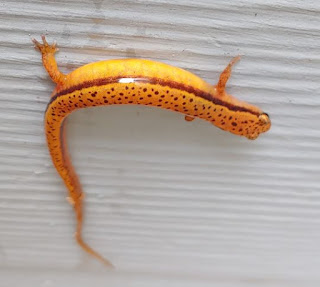 Posted by Buford Nature at 9:31 AM No comments: