I am back in North Carolina for the warm months and preparing to start construction on my mountain house. While clearing the house pad of trailers, tools, and trash over the last few days, I have run across some cool critters. Scrap boards were set on the ground next to the portable sawmill so Uncle Ralph and I could mill logs without slipping in the mud. These had to be moved. I knew from previous experience that untreated wood set an inch or two in the ground was good resting/hiding habitat for the northern red salamander (Pseudotriton ruber ruber), so I kept an eye out for them. Sure enough, a 6-7 inch long specimen had burrowed under a grounded board, so I snagged it and this is the best pic of the lot: 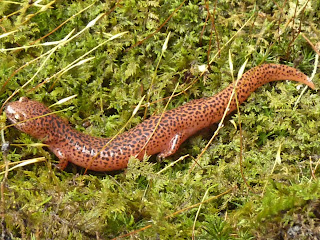 After wrestling with an unsatisfactory photo setup with the last red salamander I caught here, I had been giving some thought to upgrading my salamander photo setup. But, having done nothing so far but cogitate, this new Sally required immediate construction. First, I drilled small holes in the bottom of a $2 plastic salad bowl and then lined it with a mat of sphagnum moss scalped from a rotting log: 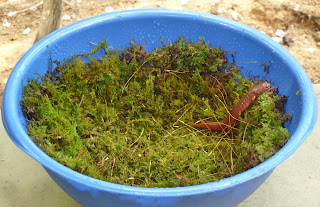 Placing it in the bowl amongst the moss, new Sally settled right down and let me take a dozen or so pics. The previous Sally squirmed around throughout its photoshoot, but that was probably because the bowl was bare glass and Sally had no place to hide. Perhaps Sally feels more secure in its native element of leaves and moss. Whatever, this time was different. After the photography was completed, I placed the bowl in the ground within an old stump hole in the heavily shaded forest: 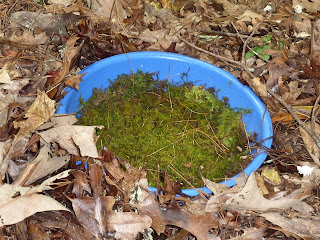 And then camouflaged the blue plastic with detritus: 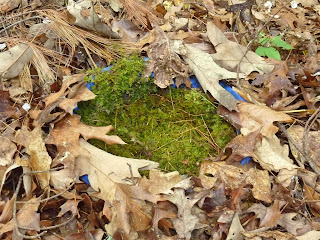 The plan is to leave the bowl in the ground where it will incubate in a natural Appalachian forest environment. Hopefully, the sphagnum moss will live and grow in the bowl well enough to look like a moss-covered hollowed-out stump and be good for small-animal photography.

Also note, while disassembling and burning a cord or so of sawmill scrap, two copperheads, a ringneck snake, a blue-tailed skink, a slimy salamander, and an American toad were uncovered and released unharmed. Only the smaller copperhead was photographed but technical issues prevent me from retrieving the pic, so this older image of a copperhead on that wood pile will have to do: 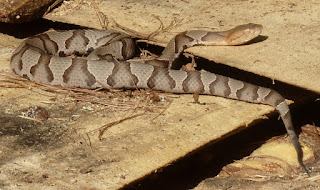 Posted by Buford Nature at 12:50 PM No comments: