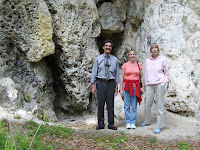 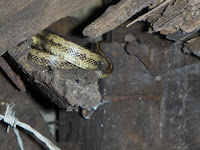 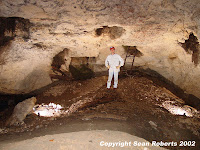 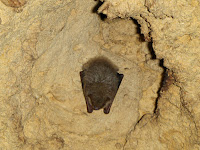 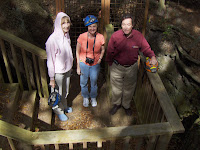 I chair this year’s annual convention of the National Speleological Society (NSS), to be held in Lake City, FL, and attended by an anticipated 700-900 NSS members (http://www.nss2008.com/home.html). This week I have been assisting Faye B in looking at facilities and attractions that the Junior Speleological Society (JSS) might like to experience, and ferrying her around to meet helpful civic and caving resource people.

Yesterday we visited four caves that she might take the kids to explore this coming summer. Our first stop was Bat Cave, located in Alachua County and owned by Santa Fe Community College. Jim S took of from work so that he could obtain the keys to the property’s perimeter fence and cave entrance gate. Photo 1 shows Karen, Faye and Jim at the entrance gate to the cave.

We went to the cave’s main room, below the entrance shaft, and briefly toured the front of the cave where Faye got a good look at what this cave is like. The pool below the entrance room had only a foot or so of water depth. We saw three blind, albino cave crayfish, the Pallid Cave Crayfish (Procambarus pallidus), in the pool.

We also saw a handful of Southeastern Bats (Myotis austroriparius) hanging singly in small pockets in the cave walls and ceiling (photo 2). All appeared to be healthy and without symptoms of so-called white nose syndrome (WNS). This dreaded affliction is estimated to have killed up to 11,000 bats in the Northeast US in the past two years (http://tinyurl.com/2kqs3x). Bat species known to be directly affected include the Little Brown Bat (M. lucifugus), Tricolored Bat (Perimyotis subflavus), Indiana Bat (M. sodalis), and Gray Bat (M. grisescens), the latter two of which are considered endangered species by the US Fish and Wildlife Service.

Although not visited today, I pointed out the location of a small cave called Seven Chimneys that Faye could take the children to. Photo 3 is a depiction of the interior of this cave, showing a caver standing on its entrance debris cone below five of the cave’s seven entrances.

Our next stop was to Warrens Cave on the northwest side of Gainesville, FL. This is the longest known air-filled cave in the state, and is guarded by a stout, heavy entrance gate and perimeter fence. We got the keys from Bill O, an NSS Fellow and winner of the first Stewardship Award ever given by the Southeastern Cave Conservancy, Inc. We entered the cave only as far as the First Drop. On the way out I observed a small (2ft to 3ft long) yellow rat snake (Elaphe obsolete quadrivittata) in the sinkhole entrance (photo 4).

We cavers have seen a yellow rat snake at this cave entrance and just inside the cave on many instances over at least three decades. Evidently, one such snake takes up residence there at any time and territorially drives off other rat snakes. Over time, older snakes are replaced by younger snakes in turn. In warmer weather the yellow rat snake can usually be found at the cave entrance, whereas in winter it remains a hundred feet or so within the cave where it is warmer.

We saw no bats in the cave. Warrens once harbored a population of bats (Little Browns and Pips), but they were driven from the cave by teenage and college aged partiers. The current gate serves well to keep out trespassers and vandals, but it also keeps most bats out of the cave because it is not “bat-friendly.” Also, the yellow rat snake is known to catch and eat bats that fly through cave gates.

Photo 5 is of a caver in the back of Warrens Cave within a 600ft long body tube passage called Agony Alley. I have surveyed passage on the far side of AA, and can tell you that I’ll never go there again. Some places must be left to younger generations to explore, heh heh.

We then drove south to Ocala to meet up with Bill B, the Keeper of the Gates for several Marion County caves. No one has done more to protect Marion County caves, and in recognition of his efforts the NSS has awarded him Fellow status and the Southeastern Cave Conservancy has given him their coveted Stewardship Award.

Bill took us to Whitecliff Cave, which is frequently used by Florida caving clubs to introduce caving to scouts and other youth groups. We did not enter this cave. Photo 6 shows Bill, Faye and Karen beside the cave’s entrance, which is beneath the steel plate on the ground to Bill’s right. You can see graffiti on the rock walls behind Karen.

Our last stop was Jennings Cave. This cave was purchased from Marion County for about $1,700 in back taxes, and then donated in fee simple to the Southeastern Cave Conservancy. The entrance to Jennings is via a 30ft deep solution pipe that is climbable with a proper belay. The Marion County Sheriff twice blocked the entrance by dumping tons of boulders into the pipe, but Florida cavers have both times removed them and re-opened the cave. We are not happy with the sheriff’s attitude towards property rights.
Afterwards, we made our way over to Sleazeweasel’s house to attend a campfire dinner party for a family of visiting birdwatchers (see the post following this one). It was a long, busy, satisfying day.
Posted by Buford Nature at 3:57 PM