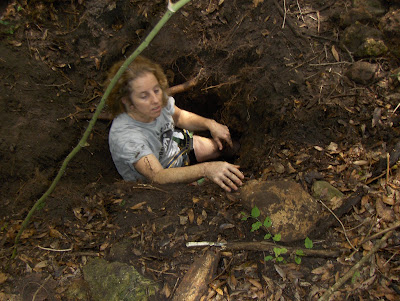 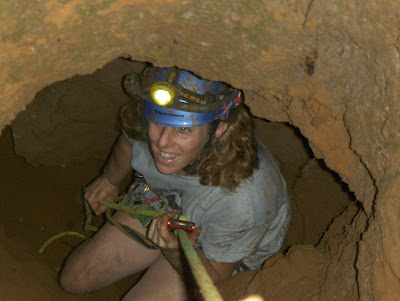 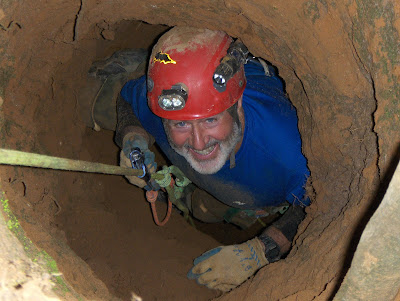 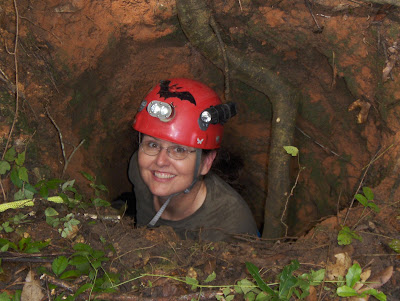 In planning for the 2009 Florida Cave Cavort, a group of cavers from the Florida Speleological Society met today at Jerry and Shirl's farm a few miles outside of Williston, FL to review the property's characteristics. Jerry had told us that an adjacent property held what might be a cave unknown to cavers, so after we reviewed the property, Shirl walked us over to a clump of hardwoods in a hayfield to show us the situation. Exploring the little hardwood hammock, we turned up a dig site and a hole in the ground.
The hole looked like a solution pipe but was lined almost entirely with red clay. This is most unusual for the caves in that area (known as the “Archer Caves”), as nearly all others have entrances through rock. Most probably, this vertical entrance is a solution pipe through limestone that had filled with red clay (geological detritus from decomposition of the limestone) long ago, and then recently had fallen down into the cave below to create the entrance. The gang felt that vertical gear was needed for the pit, so everyone but me walked back to their vehicles to retrieve their SRT gear.
I felt confident that I could chimney down and back up the pipe, so instead I went to work digging at the other potential cave entrance. It was a small sinkhole that had been filled over the years by rocks and farm trash by former landowners, probably to keep their cattle from falling in. Most of the rocks were cobble sized and easy to dig out, but they were interlaced with tough roots which had to be removed first. The roots were mostly small, but all of them were as tough as wire and had to be cut with my pocketknife. I was unable to rip any of them out by hand, so the going was relatively slow. By the time the others returned, I was drenched with sweat, and Kitty's offer of water was gladly accepted. I just can't believe I went out there without water! Gobble, gobble.
While I was drinking water and catching my breath, Kitty jumped into the hole and continued removing rocks and soil, and was able to get down almost her height (5ft 2in) into the dig. She stuck her leg down through a small hole and reported she felt a void below her feet. Mike and Danny set a rope and lowered it into the nearby pit and Mike descended first. Danny followed him, and then Annette and Kitty. All of them used SRT. I descended last and basically slid down the narrow pipe, holding onto the rope for insurance.
A room appx 65ft long averaging 8ft wide by 7ft tall exists at the bottom of the pit. The floor of this room is mostly covered with breakdown boulders, but here and there are several fissures in the floor leading down to clear and blue Floridan Aquifer water. Mike explored a bit of this lower level, but determined that it didn't go. I studied the water for signs of life, but saw no bullheads or troglobitic crayfish. We surveyed this room and the pit, and Annette took a number of photographs. Danny announced that this cave was definitely virgin, and confessed that this was his first virgin cave exploration.
At floor level near the back of the room, on the right-hand side (facing into the cave) is a low bedding plane “room” approximately 1-2ft high and perhaps 50ft x 50ft or more in extent. Mike, Danny and I explored part of it but did not survey it. It has numerous partitions, speleogens hanging from the ceiling and rocks, which make it look like a maze, but I think it should be mapped a a single room with “obstructions.” This room will take most of a day to survey, and we were running out of time, so we left it for another day.
Everybody but me used SRT to exit the cave, while I just shimmied up the clayey pit, wrapping the rope around an arm for a belay. I exited after Mike, and photographed Kitty, Annette and Danny as they ascended and exited the pit.
We initially decided to call the cave Shirl's Cave, as she showed it to us. Also, the cave on their own property (we thought) was called Jerry's Cave. It turned out that Jerry had named their cave Shirl's Cave, so we needed to come up with another name, which we couldn't decide on. Until we have a better name for it, I am calling it Red Pit Cave.
Posted by Buford Nature at 1:39 PM