Sunday the 15th Brian, Tom and I met at 1000hrs at Big Cypress National Preserve at the gated entrance on the east side of SR 29 a few miles north of Alligator Alley. Our goal for the day was to try to make it east and then south along the limerock roads about 8 miles to the Hinson Mounds identified on Google Earth.

While preparing for our bicycle outing a group of Trinidadians were cast-netting for armored catfish. This first pic shows one fellow throwing a 7-ft (radius) cast net out over the canal beside SR 29. You can also see ripples on the water's surface where the armored catfish come up to gulp air which their gut absorbs oxygen. 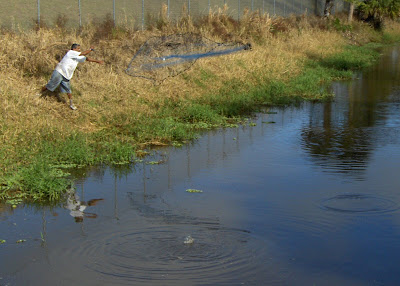 This second photo shows what another cast netter can do with a very small net. We estimated perhaps 20-25lbs of fish in that net, and it was caught in a single cast! 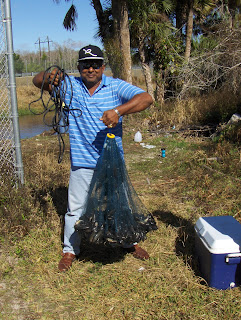 Brian tells me they are in the genus Corydoras. The canal was loaded with them and Florida spotted gar (Lepisosteus platyrhynchus). I also saw the fishermen pull out a walking catfish (Clarias batrachus) and feed it to a 6ft alligator they call “Rosie:” 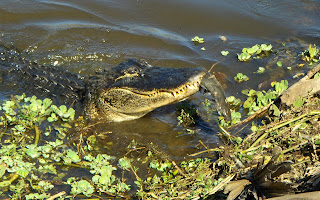 Sated on catfish, we headed east on the shaded limerock road, enjoying the coolness of the morning and the scenery. This part of the route goes through hammock forest that burned a couple of years ago. The fire killed some vegetation, mostly hardwoods, but evidently there wasn't enough fuel to really cause a canopy kill. Most plants were leafing out pretty good, especially at this time in early spring. Hammock vegetation is dominated by cabbage palm, live oak, laurel oak and red maple. Strangler fig (Ficus obtusifolia) and iguana hackberry (Celtis iguanaea) are also common. My favorite-name tree, the gumbo-limbo (Bursera simaruba), also occurs here sparingly.

The first open water we came to, an old borrow pit, also supported a mess of fishes, but is ruled by larger alligators than Rosie: 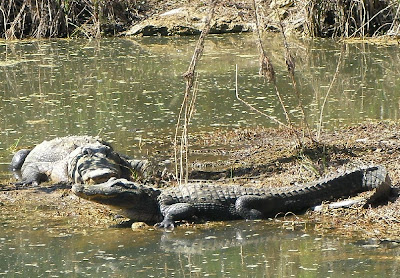 The one in the foreground is appx 9 ft long, and the thing that looks like a reptilian hippopotamus behind it is a huge alligator (photo by Brian Houha). It is hard to estimate the size due to its angle, but it was perhaps 12 ft long. A small body of open water in a shaded swamp a mile or so further east harbored another giant 'gator, this one perhaps 10ft in length. As we continued bicycling down the shady lanes, we marveled repeatedly at the very large alligators we were privileged to spot along the way in the small water bodies that remain in this spring drought.

Tom spotted a 9 ft 'gator with a bloody snout, evidently obtained in a fight with another 'gator. As we watched, it slowly paddled into the shelter of a culvert out of our sight. Perhaps the largest alligator we saw was a gray old geezer more than 12 ft long - use the immature little blue heron (Egretta caerulea) for scale):

Two other 'gators had a couple feet each of their tails missing, and both of them were in the 10-ft length range. When droughts drain the swamps and everglades, the 'gators converge on the few deep waters remaining such as these canals, roadside ditches and borrow pits. Large old male 'gators are mean enough, anyway, but when they are concentrated during mating season like right now, fights will ensue.

We pedaled a total of about 17 miles based on a Google Earth path distance: 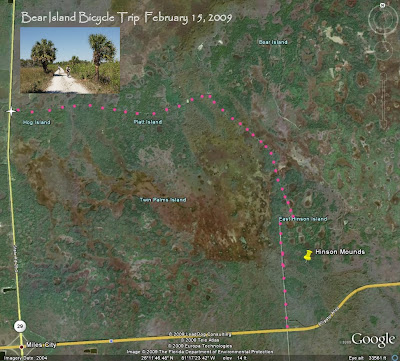 It was all done on easy biking limerock roads, mostly under a moderate to broken shade canopy. We encountered very few people, all friendlies, although we did have to empty our packs for the ranger due to one of us blurting out to everyone he came to that we were looking (on federal lands) for the Indian mounds. The ranger wanted to see if we had shovels with us.
Posted by Buford Nature at 1:29 PM