An early afternoon thunderstorm Thursday moved quickly over Orange Lake and cooled the air from the high 80s to the low 80s, and that was enough to set me free! I put on swimming trunks, calf-high rubber boots, a tee shirt and hat, and strode off through the lake margin hammock down to the wetland continuum of shrub swamp, dry marsh, wet marsh and thence back uphill in the dense shrubs dominating the first island. The goal was to plant some early successional tree seedlings on the island. The four islands are created from dredge spoil and are vegetated by invasives, both native and exotic. I had been thinking to make a little project of occasionally walking over to the island carrying plant species that might increase the biodiversity of the island. A small collection of black cherry, sweetgum, cabbage palm and sugarberry seedlings were dug up from my plant nursery and bagged for the trip over.

On my previous trips out there the weather had been relatively dry. The island's “soil” had been dessicated and plants had made a only a modest cover on the ground. I figured the summer rains had softened the ground by thoroughly moistening it, but was not prepared for the rampant foliage I met. Elderberry was flourishing everywhere over the island, not just along the its margin, as were pokeweed, blackberry, fireweed and thistle. Passionflower and peppervine, an odd couple in name only, had spread atop much of the shrubbery.

It was a mess of leaves and green stems that looked like it would shade out my poor little tree seedlings. I would be throwing them to the wolves, I thought, so brought them back home for reconsideration. Methinks I need to carry some serious gardening implements out there the next time, and possibly larger transplants, or just forget it.

At any rate, I have been experimenting with my new Garmin GPS 60CSx, and how it can interface with Google Earth. Here is the track of my 3-hour wander: 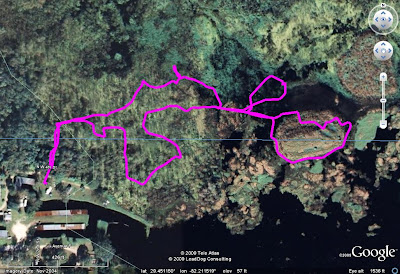 I was following the edge of the water along the northeast part of the track when I stumbled upon an alligator nest. Judging by the looseness of the top of the pile of dead vegetation that comprised the nest, I'd say that the last sheaf had been placed there only a short time ago. Oh, it wasn't as if the top was still visibly settling in, it's just that the storm had just beat down pretty hard and yet there was this airy looseness about the nest. Creepy. I remained alert while taking the waypoint and photographs, I did. 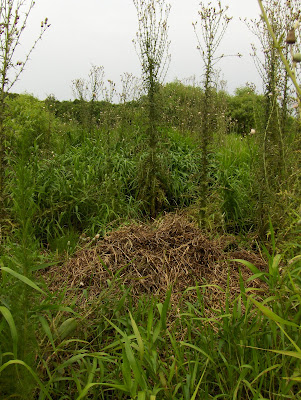 Did I ever tell you about the time I was flagging wetlands in Ponte Vedra Beach, FL within The Guana? The Guana River comes out of real old residential development in the form of a manicured, eutrophic stormwater reservoir. It drains into the next, old-but-not-quite-as-old residential development that also uses it for stormwater disposal but has left significant portions of its shoreline wild. There I was along this moderately long wild stretch, making slow time through dense shrubs and intertwined vines and golden orb spider webs, when suddenly an Enormous Black Thing erupted from the ground and bolted straight at me!

In the first half-second I figured out it was either a bear or a feral pig or a mature alligator or the largest indigo snake that had ever slithered over the earth. “Well,” I thought, in the next half-second, “if I think this could be a snake, then it must have scales, and if it has scales it cannot be a pig or a bear, and since this is not the Miocene, it must be a 9-foot 'gator running straight at me! ... I'm gonna die.” But then it suddenly turned hard left and made a beeline for the water, and I realized it had simply taken an established path to the water and never intended to attack me.

Several biologists have observed and recorded instances of startled reptiles heading straight for a person only to continue on their trajectory after the person moves aside. Bruce Means wrote about his experiments on the subject using poisonous cottonmouths. He may have been the first to realize that the snakes were just trying to take the shortest path to the escape pod (lake) and that they were not trying to attack. I believe my 'gator was in that same mode.
Posted by Buford Nature at 2:47 PM