Santos Bike Trails are some of the best mountain bike trails in Florida, or so they say. Whatever, I like ‘em. I pedaled 11.9 miles there today in about 3:45hrs, pretty slow overall, but I had a mission: I wanted to use the GPS to track the outside trails and take waypoints at all intersections so I could locate the trails later on a Google Earth image that can be copied and taken along on the next trip. Collecting 30 waypoints definitely slowed me down, but rest assured that otherwise I boogied. I mean, what is singletrack for?

The last time I biked Santos, it was without maps and I was never sure where I was. It isn’t a big deal, but I’d rather know where I’m at. Knowing my name just isn’t enough.

The trails run through a forest that is at an early stage of plant succession dominated by fast-growing and mostly short-lived trees, incl laurel oak, water oak, live oak, loblolly pine, black cherry and sweetgum. Only a few pignut hickories and magnolias were spotted, which are longer lived species considered climax forest dominants. There were probably other eventual climax dominants present, but I was, you will remember, boogieing, and must have missed them. The woods had abundant mushrooms, the commonest of which was this orange beauty, Cantharellus ciberius, the Golden Chanterelle: 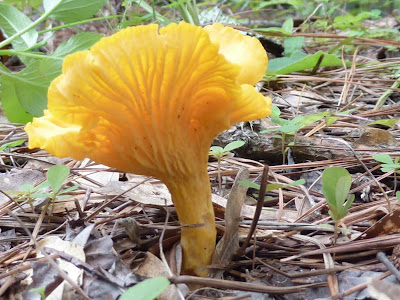 Posted by Buford Nature at 8:00 PM