This weekend's adventures, so far

Yesterday Sleazeweasel, Brack and I went on a mission of biodiversity in an outright act of guerrilla activism, but I can’t tell you about it because Sleaze swore us to secrecy. I can tell you, tho, that it was a highly moral and legal act. I can also say that we must have looked odd dressed in camo and wearing knapsacks as we rode our mountain bikes through a Friday afternoon throng of brightly colored joggers and spandex bicyclists. A few wild men grinned as we rode by, probably thinking we were marijuana growers.

Soon we reached the end of the trail, stashed our bicycles behind a clump of cabbage palms and headed off trail into the woods. Right away we ran into a thick undergrowth of yaupon holly (Ilex vomitoria). This shrub has a long Native American history as making a caffeinated drink and has bright red fruits that winter birds feed heavily on, but to the walker it is a thicket-maker. Twigs and berries and bugs down the back of the neck, spider webs… Oh, did I mention that I forgot to apply mosquito repellant? Anyway, we accomplished our mission and had an aerobic 13+ mile bike and hike trip.

This morning I set off solo in a 13ft canoe out into Orange Lake. I like to hug the shoreline when canoeing big water, so I paddled easterly along the edge of the marsh, only a little south of where I usually walk to the spoil islands. I have to push through the water lilies ahead and to the left: 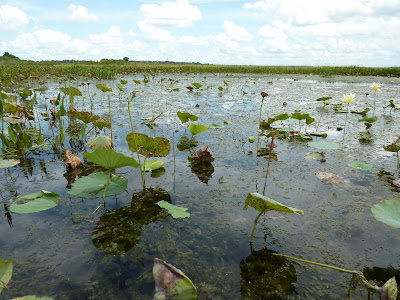 Along other stretches of this route the water is more open, and I suspect alligators and/or boaters might have something to do with it: 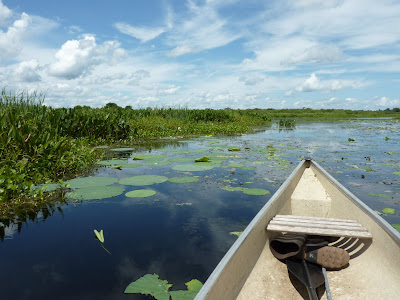 Hydrilla verticillata nearly fills the water column almost everywhere I went in the lake today. Hydrilla is even underneath the extensive stands of American lotus and yellow water lily. You can be sure the hydrilla sucks a lot of oxygen out of the water at night. Floating mats of marsh vegetation center on every higher substrate and grow outward over the water, especially from the lake margin, shading and deoxygenating the waters beneath. I saw only small fish like mosquitofish and bluegill, and only one turtle. I hope their absence was just a hot summer afternoon thing.

As I was drift-paddling along the shoreline I spied a family of pied-billed grebes (Podilymbus podiceps) up ahead foraging around and on a floating clump of pickerelweed. They saw me coming but didn’t appear too awfully frightened, so I took out my new camera and put away the paddle and let the wind push me slowly toward them. They were in an alert attitude as I initially approached, but seemed to get used to me as my canoe slowly drifted past them. It was a family of two adults and three young:

The wind picked up and pushed the boat even more rapidly toward the birds, and I thought for sure they would flush, but no, they just moved nimbly out of the craft’s way, inches away. Here’s the last one hurrying to catch up as I finally passed them all: 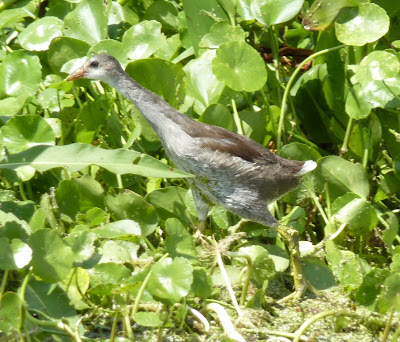 Returning to port I opted to steer through relatively “open” water and paddle directly against the wind for another good aerobic workout. The exercise did wonders for the knots around my right clavicle.