Why I love wildlife

A couple of nice things happened today first thing. A sandhill crane walked right up to me and we exchanged contact calls, and one of the prettiest water moccasins I ever saw showed itself to me but didn’t bite me.

As usual, I popped out the front door to greet the morning and bounded down the stair, but had to stop abruptly or trip over the crane. This is the bird foraging in my yard nearly every morning early, the one I photographed and blogged about recently. It did not startle or back off. Heh, it just waited patiently for me to catch my balance, and then looked up at me with its big red eyes and, well, didn’t exactly “beg” for a treat as baby birds do, but still managed to eke out a teensy wheedle by cocking its head and slightly gaping its beak. Maybe it even held its breath, I don’t know. ;-)

I almost laughed out loud I was so delighted, but instead I did my “contented, here-I-am” call. This consists of a deep-seated hum that starts out low and increases in pitch up to the end. It lasts only two seconds or so, and is the closest thing to a leonine “purr” that I can muster. Anyway, cats love it, and so do dogs. It is one way I try to convey to them that I am a friendly. Evidently, sandhill cranes like it too, as this one responded, very softly, with what I interpret as “contact calls:”
http://www.savingcranes.org/sandhillcrane.html

I always took it for granted when cats and dogs responded positively when I purred at them, but learning that a large, wild animal will also do this is stunning. That’s what you get when you don’t kill big animals.

I think the crane wanted me to feed it. I bet someone else around here does, maybe even hand-feeds it. Years ago I saw dried corn offered from a child and her grandma’s outstretched hands to a family of cranes. I won’t feed it though, because of all the bad things that can happen when humans feed large wildlife in their yards, especially from their hands.

After the crane moved on I went over to tend the vegetable garden. A voracious species of insect was ravaging my beans and solanaceans - tomato, pepper, potato and angel trumpet. I picked about a pint of ‘em by brushing them off into a cup of hot soapy water where they drowned. As I was kneeling in shorts, bare-legged amongst the leafery, a fawny reddish cottonmouth suddenly moved deliberately out from a clump of sweet potato leaves beside my knee and headed straight toward the adjacent frog pond. Remember the lesson from “Stalking the Plumed Serpent?”

I didn’t have my brand new 12x macro lens camera with me on either encounter, but I did get to use it to photograph the garden insect pest: 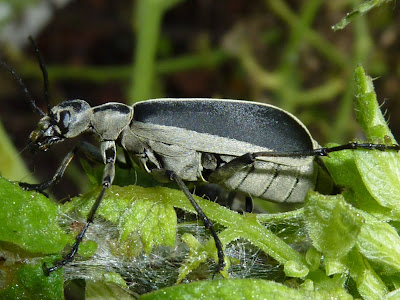