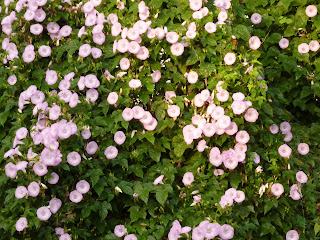 I used to collect morning glories. I would scour the countryside during this time of the year looking for good seed sets on robust, colorful plants. Perhaps almost a dozen or so species were trying to survive in my sandhill botanical garden back in the 80s. This morning during a dawn lake marshside stroll I spied this blooming trellis of tievine blanketing a small Chinese tallow tree. The tievine keyed out in Vascular Plants of Florida (Wunderlin and Hansen 2003) to Ipomea cordatotriloba (I. trichocarpa). The leaves of this mass of tievine are mostly saggitate, although the species often has perfectly heart-shaped leaves, sometimes both on the same plant. You can also see a few larger, heart-shaped leaves of air potato (Dioscorea bulbifera) in the trellis. Bumblebees and a wild bee species were feeding on the nectar but I couldn’t get any decent pics of them. 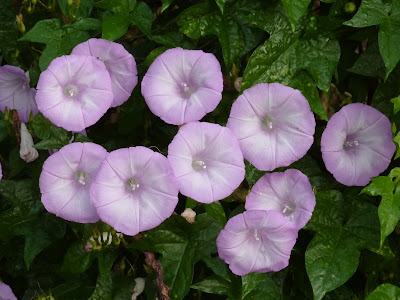 Then a misshapen fig beetle (Cotinus texana) fell out of the sky and landed on the hood of my truck. It has a missing right shoulder that looks like it might have been burned off and then healed over; the little creature can still fly, though. One pic shows the damaged shoulder and the other reveals the spread-out tines of what I think is its left antenna: 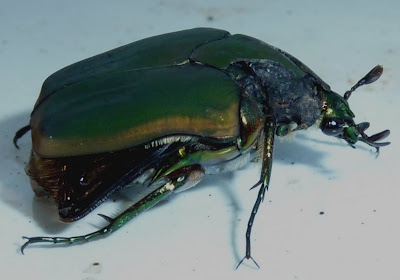 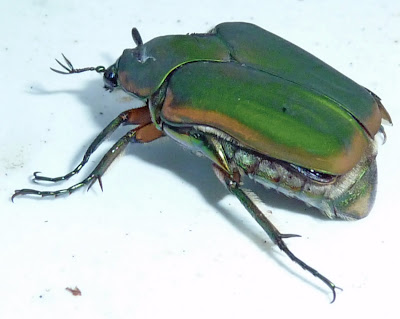 Posted by Buford Nature at 9:56 AM