Saturday we arose well before sunup and grabbed breakfast. Dealing with the new permit system and chatting with the 4th generation local who explained the new permits to us at great length cost us almost a half-hour. Oh well, it was a cultural experience. We then launched two canoes at the Chassahowitzka River boat ramp. We paddled about two miles east along this beautiful, spring-fed, fish-filled stream, gratified at being able to get so close to wood storks: 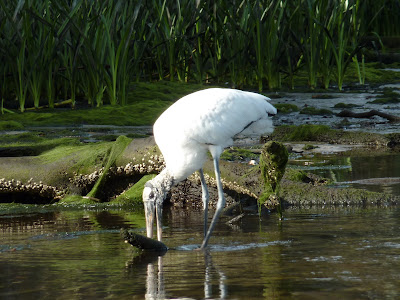 Once we reached the Gulf of Mexico salt marsh, the river turns south and flows through its estuary. The floristically neat thing to me about the trip thru the salt marsh was the giant leather fern, so incongruous among needlerush and saltgrass. I suspect it makes better cover for wildlife than Juncus and Spartina, as it is much denser in growth form: 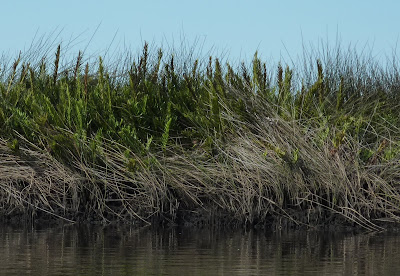 We continued another 2.6 miles to the head of Ryle Creek where it reaches Zebrafinch Road. People tie their boats to the cabbage palms lining the creek banks and then step out of their boats onto a mess of decomposing wooden pallets reminiscent of a jumble of “pick-up sticks.” The pallets and separate planks are in good to rotten shape, and the word “precarious” came to mind when navigating the narrow pallet path. But don’t get me wrong! I bless the nice people who took the time and effort to bring the pallets out there. Otherwise, it would have been a very muddy slog through the salt marsh to the road.

Zebrafinch is an elevated dirt and limerock causeway that runs through the Chassahowitzka National Wildlife Refuge, and is used by hikers, bicyclists and hunters. The road is a little bumpy, but it is hard packed and relatively easy to ride on, and quite beautiful: 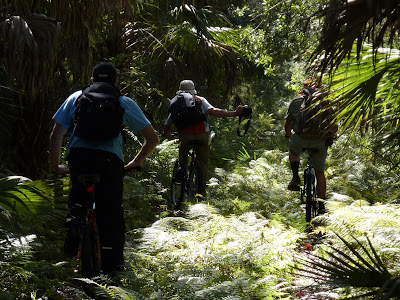 There is a hunter sign-in station at the landing, and we signed in even tho we weren’t hunting. We knew we were going to be a long way from home and out late at night under a moonless sky. From there, we biked (yes, we carried bicycles in our canoes) 2.6 miles south on Zebrafinch and then east at a tee another 1.8 miles to a short, almost hidden trail road that goes less than a hundred feet to a scenic sinkhole pond: 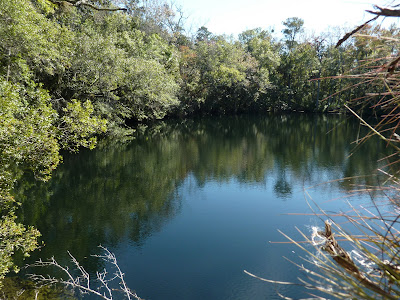 Over the next (too) few hours we biked around there and points south, and several times stashed bikes and walked into the swamp seeking features that on aerial photos looked like sinkhole ponds connected by a karst stream named Blind Creek. It is a clear blue, spring-fed stream that emerges from the aquifer into the shade of the dense Chassahowitzka Swamp forest and then runs several miles through the forest before plunging back into the aquifer. The stream and sinkhole ponds – a string of pearls in a black velvet swamp – point toward Blind Spring at the edge of the salt marsh. Cave divers have explored some of these sinks but have endured incredible hardships slogging their bulky, heavy gear through the swamps. The few accounts I have read indicate little or no underwater cave has been found yet, but I dunno, cave divers are pretty thorough and very discrete.

Eric, Bruce and I had each assembled a veritable library of maps of the place before we left. We had color aerial photos, topographic maps at scales identical to the aerials, several versions of the topos, national wildlife refuge maps and state wildlife management area maps, not to mention the maps on two GPS units. I had also established waypoints at critical road and tramway junctions and major karst pond features, loaded them into my GPS unit and printed them on my aerials and topos. We were loaded for bear, mind you, not because there are bear out there, which incidentally there are, but because we wanted to avert a death march.

We knew ahead of time we would have to cover a lot of ground to see even a small fraction of the major karst features out there. In planning for the adventure, we were estimating maybe 10 miles of canoeing, another 10 miles of bicycling and 2 miles of hiking, all in a short winter day. We knew we would have to paddle back in the dark, so we brought headlights and spare lights. Indeed, the paddle home was so dark we might have made a wrong turn or two if it were not for the GPS. The final tally was 9.2 miles canoeing, 9.4 miles biking and 2.1 miles hiking, totaling 20.7 miles. 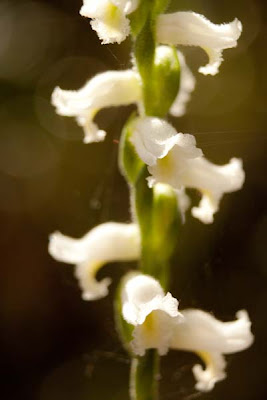 The best way to more thoroughly explore the Chassahowitzka karst would be to camp out there over a long weekend, but that is illegal.

Eric Zamora took the photo of the orchid; all others are mine.
Posted by Buford Nature at 11:06 PM