Last Sunday, after a full day in the Chassahowitzka wilderness area, the four of us took a leisurely 3:45 hr canoeing trip on the southern Withlacoochee River, putting in at the Riverside RV boat ramp in Nobleton about 0.4 mile upstream of the CR 476 bridge. The RV park staff is friendly and allowed us to leave our vehicles parked there without charge. A few park people feed white bread to the river turtles and bream from the park’s dock. Here you see a mature female peninsular cooter being chased by a smaller male. It was humorous watching her chase bread and him chase her. Some things never change. 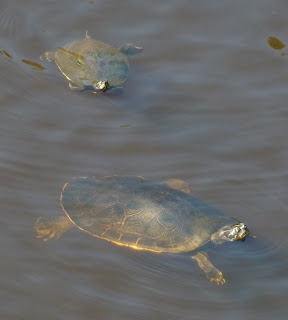 We got a very late start due to a lapse of respect on the part of one fellow, and shortly after launching we were attacked by a pair of large, unneutered male dogs that leaped into the river and swam out toward us, barking and snarling, with the evident intent of doing us harm. Some woman on the property just stood there and watched, and did nothing to restrain the dogs or even call to them. I wanted to bean the closer one with my paddle, but could not get Bruce to steer us that way. The next day, Bruce said he called the Citrus County Sheriff’s office to complain. I intend to call on Monday to find out what the local law enforcement did about the matter. So be careful if you paddle parallel to Lamkin Street anywhere near lat/long N028.647401°, -W082.262214° in Nobleton, Florida.

Once past town, the river widens and is flanked on both sides by wide floodplain forests dominated almost exclusively by bald cypress. These now-undevelopable wetlands are about 350 – 750 ft wide, so there is no development anywhere near the edge of the river. Paddling through there it felt like wilderness, and the three small islands in its center were the perfect location to take a break. This scene along the way shows the floodplain forest, a floating mat of grass and a peninsular turtle basking. Note the three dark spots on the hinge between the turtle’s plastron and carapace; they confirm the species identification. 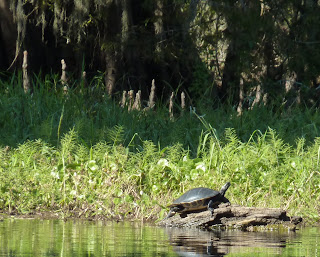 Floating into Istachatta and its riverside development, the river narrows and we scooted quickly along. From that small town all the way to the SR 48 bridge take-out are only two small developments, mostly set back from the river’s edge. The remainder of the paddle is wild peace, with nothing but clean water, tall trees and plenty of fish and wildlife. Only occasionally did we encounter another boater. Lake Annie, another widening of the river, is an oxbow feature on a north-south alignment. As we entered it from the south, we could see a small cloud of turkey vultures circling amid the vestiges of the day’s last thermal. 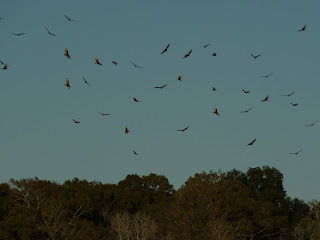 The north end of the lake had large several cypress trees and snags supporting a few hundred more vultures. They were coming in to roost for the night from miles around, first approaching and then circling, and finally landing beside others either on the east side of the river or the west. I wondered how they made their choice of sides? Why would one go over here and the other over there? Wouldn’t it be safer if they all settled in together? But as we came closer, we could see that the east side held only black vultures and the west side only turkey vultures. Yep, birds of a feather flock together. Here’s a snag full of black vultures: 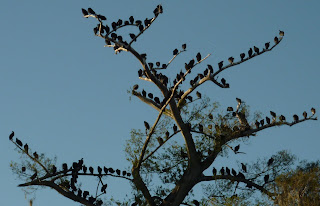 But which side of the river is better from a vulture’s perspective? Is one side better or was the choice made at random by the first few vultures? I do know that turkey vultures get up earlier in the morning. On a number of cold days in south Florida last winter when I was on site before first light in order to see which trees the caracaras emerged from (nested in), I had ample opportunity to learn in what order avian scavengers would get up in the morning. First are the blackbirds and crows, second the caracaras and eagles, third the red-shouldered hawks, fourth the turkey vultures and last to wipe the sleep from their eyes were the black vultures. Is it possible that the west side of the lake gets earlier sunlight and thus warms up before the shadier east side, and thus assists the turkey vulture’s early rising on a winter’s day? Or is the east side better for unknown reasons and the vastly more numerous black vultures ran off the turkey vultures? 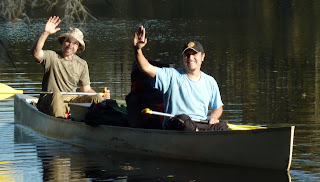 Posted by Buford Nature at 1:19 PM