I went kayaking with Jim and Brack yesterday on the Waccasassa River in Levy County, FL. Brack and I became acquainted with Jim by virtue of him being a reader of my blog. As mentioned in the sidebar, one goal of this blog is to meet fellow naturalists from around the country (world), and it was a real pleasure to spend some time in a fine Florida floodplain with another naturalist from a different part of the country - New York, in his case. So, to the rest of y’all: Come on down!

We put in at the boat ramp at the end of CR326 and paddled upstream. It was right cold, too, maybe in the 40s with a perky little breeze, but we were dressed for it with long johns and neoprene socks. Brack’s kayaks are stable and drain splash water quickly, so the only parts of me that got wet were my ankles, and they were only moistened. We left the boat ramp about 10:30am and returned at about 3:30pm, an easy 5-hour loaf.

Passing by the mouth of the Wekiva River, we noted its dark, tannin-stained waters. Ordinarily, this spring-fed tributary’s waters are clear to the bottom and its thick submerged vegetation is clearly visible. Winter rains have swollen the basin’s wetlands and streams, however, carrying heavy loads of leaves and other detritus that contribute dark-colored compounds and particles into the waters. At one point, I tried to shove off a “sandbar” covered with leaves by pushing against it with the paddle, but it just sunk in about 18 inches, proving that the bar was really just a manatee-sized leaf pack. Despite the high waters in the tribs, the river’s level was down due to it being at low tide and close to the sea. Although the current was swift in its shallower reaches, our kayaks slipped easily over the river’s flexed muscles.

Tidal riverbanks and salt marshes are muddy. You almost cannot get in and out of your kayak or canoe without getting muddy feet. Nonetheless, the banks in tidal waters seem to avoid eroding away despite numerous fiddler crab holes and swift currents. Now how can this be? This photo gives you some idea of how algae can provide armor against erosion. The depicted algal mat (the laurel oak leaves in the photo are 2-3 inches long) is filamentous and grows on top of the mud. It is apparent why it can retard erosion, but most mud banks are not so well-protected. Instead, the upper eighth-inch or so of the mud is perfused with thinner, less-visible filaments of algae that enmesh it all together. Jim likened it to a web of fungal hyphae, and upon reflection, I wonder if fungi are also associated with this wetland substrate? 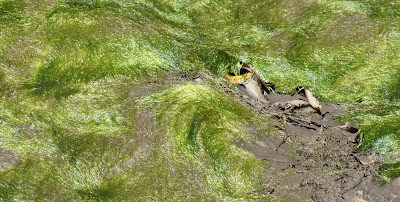 For me, one of the nicest things about Florida is that you can find flowers during any month of the year. Only a few species of wildflowers were blooming yesterday, being common blue violet (Viola sororia), butterweed (Packera glabella) and golden club (Orontium aquaticum), and only one kind of shrub, Walter’s viburnum (V. obovatum). Red buckeye, wax myrtle and swamp privet (the native Forestiera acuminata, not an invasive exotic Ligustrum) exhibited flower buds, but they were not quite yet open for business. Wind-pollinated, leafless trees on the other hand, were starting to bloom pretty good, including sweetgum, winged elm, red maple, bald cypress and coastal plain willow, and possibly others too tall to clearly tell. Fortunately, the oaks and pines were not yet trying to ignite hay fever inflammations.

Where the river passes under CR326, two of the pilings holding the bridge up were badly eroded by physical damage and corrosion. Here is a photo of the worst one, with its reinforcing wires fully exposed! One wonders how many pilings are actually necessary to support this bridge, but I suppose FDOT has made the county build in sufficient redundancy. 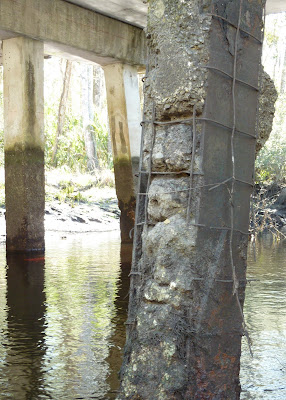 Not surprisingly for those who know me, we just had to stop by the solution valley located up one of the Waccasassa’s tributaries that I have mentioned here before. As you may know, a solution valley starts out as a limestone cave whose stream floor has become an above-ground creek because the roof of the cave has eroded away. In this case, remnant side passages still exist, so the big picture is that of a system of little caves pointing toward a small brook. Below are several pics of the system. In one shot of a cavern entrance, you can see the reflection of water lit from behind. In another shot, Brack demonstrates how small these cave entrances are. Most of these holes are too tiny for designation as caves by the Florida Cave Survey, and in several instances are more properly considered natural bridges. All are quite wet and muddy, and there are a lot of natural bridges, too. Also pictured below is cretan brake fern, Pteris cretica. It has the odd distribution of being known in the US only from Florida, Maryland, Louisiana and California. 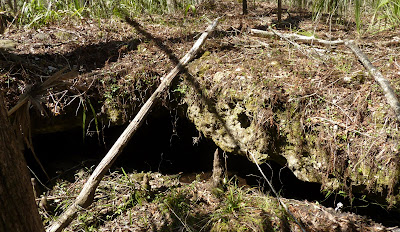 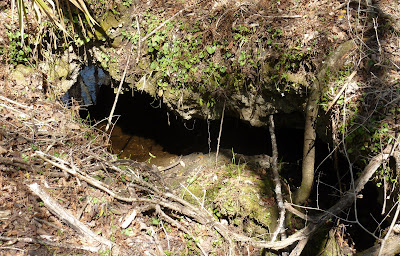 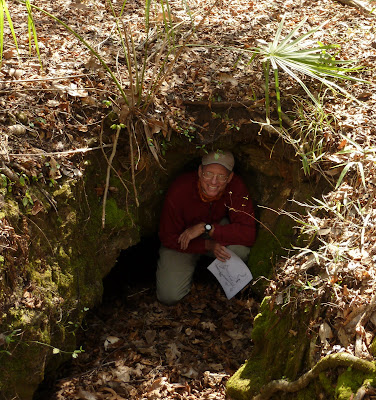 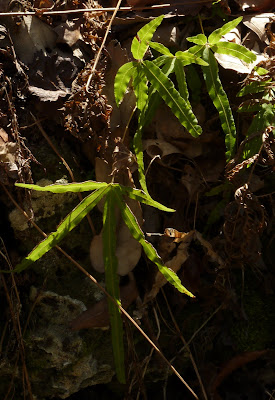 Posted by Buford Nature at 1:07 PM