I have been looking at project sites for threatened and endangered species over the past two weeks, spending long days and short nights away from home, but there are rewards… 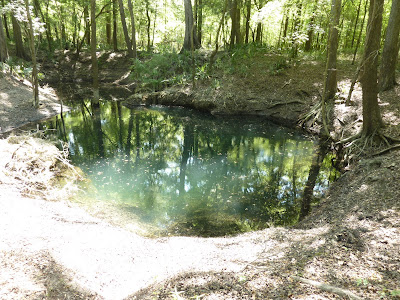 This is a spring-siphon encountered in a secret location (sorry, cave divers, but the client insists!). The darker pool in the back is the spring side and the larger, lighter-colored pool in front is the siphon; the water actually was a transparent greenish-blue. It is a karst window, an opening in the roof of an underground and underwater conduit of the Floridan Aquifer that is headed for the Suwannee River nearby. Scouting around I found a nearby karst slough elongated at one end and amoeba-shaped at the other. The blobby end even had an island! I imagined monkeys. 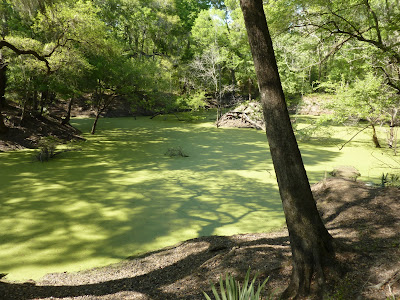 You and I would rejoice if we suddenly found ourselves owning this place, but the current owner is content to attend to other matters. If it were mine, I would control the duckweed floating over the water’s surface and turn the feature into a botanical garden. The water under the duckweed was clear blue, so it may be a spring-siphon also as the river water was a tannin-stained shade of brownish-black. Whatever, with the water’s surface opened up it would be a beautiful place to swim or take scuba lessons.

This past week we field-assessed whether the caracara nests we documented earlier this year are still in use. In winter, we had numerous sightings of adults but few juveniles. It is difficult to tell adult males from adult females unless they are beside each other. Side-by-side, the male’s black and white patterns are almost obviously darker with less blurring, but this distinction can be trumped by changing the angle of the sun glinting off the bird’s feathers. Their differing behavior, however, gives them away. When eggs or young are on the nest, or the young are still hanging out in the family’s core area, the female mostly remains close by while the male does more wandering away from the nest. Some things never change.

The plumage of the juvenile is hard to rattle up even though descriptions of adult plumages are readily accessible. This photo shows a juvenile’s plumage in brown and brown-tinged-white with gray nares and gray beak. Adults have orange nares, orange base of beak and gray tip of beak; immatures pass through a stage when the nares are dull pink yet the beak is completely gray. A characteristic that works even in bad sunlight is the presence of a dark spot in the center of the white band on top of the tail in adults, whereas juveniles do not have that spot. 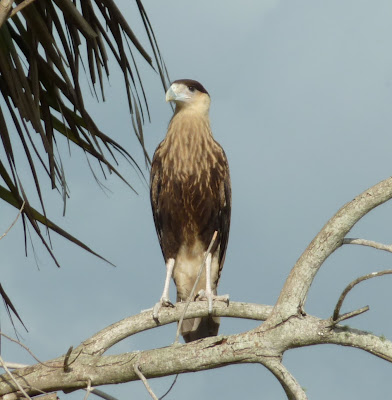 I caught another yellow rat snake (Elaphe obsolete quadrivittata), and like most of them it cooperated with my attempt to photograph it in a menacing position. This one was considerate enough to strike my camera only once. But seriously folks, despite the S-shaped body threatening to strike, does that face really look evil or angry or predaceous? Nah! Actually, I thought its belly and top of head were a particularly bright yellow, a happy color. 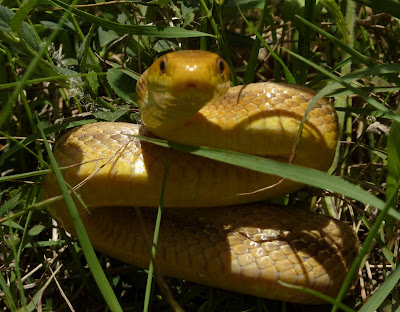 Tomorrow I’m going to practice using a TV camera system designed to spy on the inhabitants of gopher tortoise burrows. We must do this before excavating a burrow, a new requirement for us that is guaranteed to produce some interesting research results. This pipeline job gets more and more interesting.

The veg garden yielded another half-pound head of Romaine lettuce today, about three-and-a-half pounds of potatoes (mostly red), and another pound of broccoli. That broccoli is incredible – I flat-topped their branches less than a week ago and today harvested their fourth (or is it fifth?) flush of tips! I’m going to let them continue to grow and produce and see how late into the summer they will continue to feed me. Yum! I picked a small red onion and some cilantro to have for dinner tonight along with the new potatoes and fresh broccoli. Last night’s dinner was macaroni and cheese using garden broccoli and onions, each morning my omelettes are laden with onions and broccoli flowers (such a happy yellow!), and lunch sandwiches have multiple layers of Romaine lettuce. The garden doesn’t produce everything I eat, but it does produce more than I can eat of much of what it does produce, so come on down and I’ll lay some organic veggies on ya! 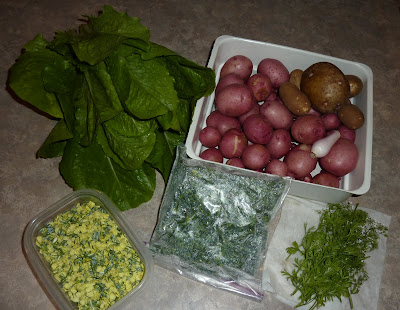