Sunday was a two-adventure day, first to the braided Wekiva River Swamp south and east of CR 326 just north of US 19/98 and second to Atsena Otie Key off Cedar Key.

The purpose of the first trip was to document the wetland status of a 20-acre parcel called "47 Runs" that the Suwannee River Water Management District had misclassified as uplands and listed for sale as surplus lands. Many broad-brush maps such as my Garmin GPS maps and the USGS Quadrangle had mislabeled the parcel as uplands also, and District staff had never visited the site, so it is understandable that they might have initially gotten it wrong, but if they had taken a brief look at the property in person I believe they would not have made that mistake.

My circle of local naturalists knew from a recent visit that the parcel was a mix of mesic hammock, low hammock and bottomland hardwoods, and that the latter habitat was directly connected by surface waters to the Wekiva River swamp’s northernmost braid, so Brack and I spent a couple of hours on site collecting plant species lists and photos showing the wetland nature of the parcel. I then spent a half-day earlier this morning writing an ecological assessment of the parcel and associating the photographs with lat/long waypoints. Hopefully, Brack will be able to use our findings to convince District staff to reverse their previous stance and remove the parcel from the list of surplus properties.

In case you need any convincing, here are three photos of the low hammock and bottomland hardwood habitats: 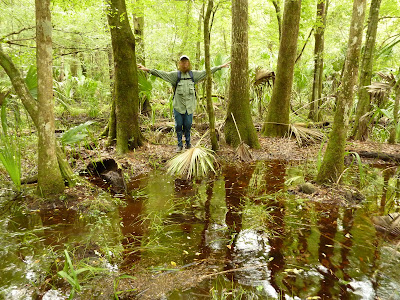 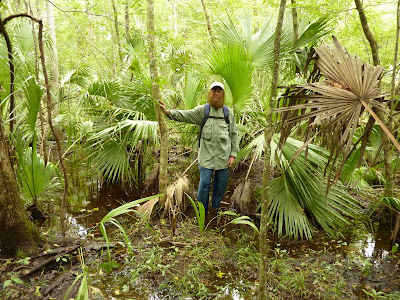 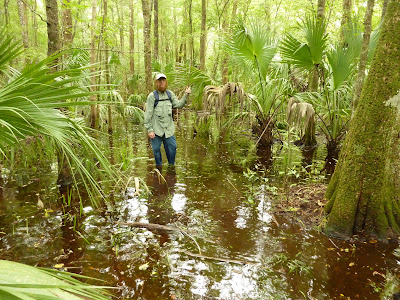 The trip to Atsena Otie Key in the Cedar Keys National Wildlife Refuge was made in Brack’s sea kayaks. He had rounded up a couple of paying customers through the Santa Fe College adult education program, billing it as an adventure in the prehistory and history of that island, and his grasp and explanations of same are enlightening even to an old time Floridian like me. The wind was rather stiff out of the east, but our low aspect on the water in the kayaks reduced its effects to a minimal degree, so the paddling over from Cedar Key and back was easy exercise. I joked that if we had been in canoes, we might have been blown out to a Pleistocene shoreline; it would have been a strenuous stretch of stroking.

An excellent brief history of the island is provided at http://www.fws.gov/cedarkeys/atsenaotie.html. In a nutshell, it was used by prehistoric Native Americans dating back appx 5000 years, was the site of a mill that produced cedar wood blanks for making pencils, a resort for Florida and Georgia planters and an important shipping port and is now a wildlife refuge managed by the US Fish and Wildlife Service. John Muir visited the place when he walked from Indiana to Cedar key, and even got a job in the Faber pencil mill for a short time and almost died of malaria there.

There is a dock and short trail on the western side of the island, the trail leading to three interpretive boards and the dock used by locals for fishing. Not far to the north from the dock is a small pet cemetery, where this marker to someone’s beloved dog can be found: 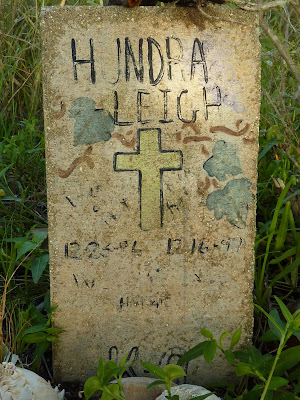 The cross on the marker indicates that the dog was a Christian. Imagine that! LOL

Brack is not only a paddling guide, but also an archaeologist by education and showed us a whelk shell that had been used by Native Americans as a tool. Notice two things: (1) the hole in the side of the shell where a stick had been driven through and tied on for a handle and (2) the very eroded, smoothly rounded pointy end of the shell indicating that it had been used (for digging, etc) long and hard enough to have been worn back 1 – 2 inches: 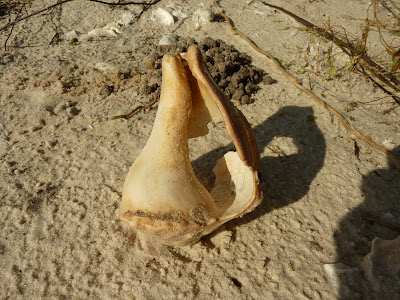 Here’s a close-up of the pointy end, showing its cultural erosion a little better: 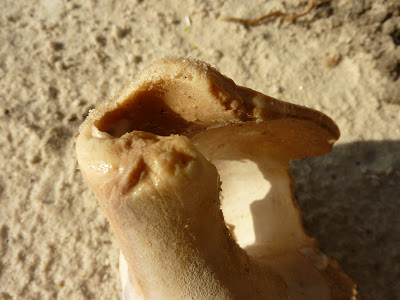 The east side of the island has an old cemetery that has been vandalized, as so many other old cemeteries in Florida (and the world) have been, but their information and ambiance remain for our gratification: 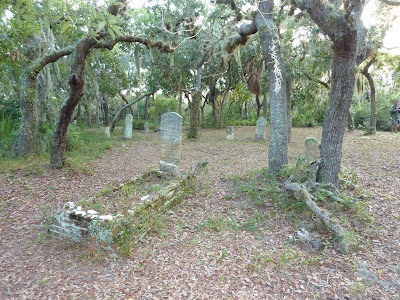 Just before leaving the island, while crossing a soft sand bar we encountered various tracks including these strange ones. The individual prints occurred in side-by-side pairs and were left by two individuals traveling side-by-side, one set of tracks being almost 3 inches long and the other 2.5 inches long. Notice that there are five toe marks above the “heel” pad, no claw marks whatsoever and that some of the tracks had toe-drag marks in the leading direction. We have no idea what animal left them. Brack and I both have track mark books, and the only mammals around here that leave five toe prints on the ground are the opossum and river otter; however, the tracks are too regular to be those of an opossum and do not have any of the features of an otter. In the field, we thought at first they might be from a felid, but cats leave only four toe marks on the ground; likewise, only four toes are imprinted by canids (plus canids leave claw marks). Does anyone out there in the blogosphere have a clue as to what might have left these prints? Could it have been cucachabras? Inquiring minds want to know! 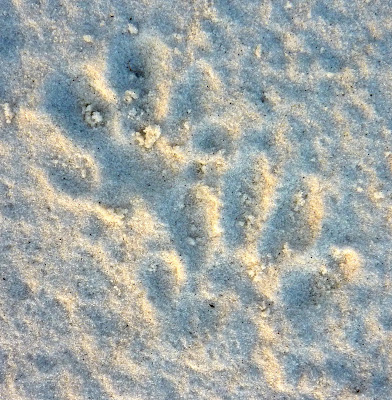 Posted by Buford Nature at 7:23 PM