The Botanical Gardens at Asheville

I just discovered this wonderful place on the local campus of the University of North Carolina. Why is it such a great place? Let me count the ways…

The parking lot is in two sections, one being small and tree-shaded and the other being a sunny overflow area. There were only a few vehicles other than mine, so I was able to park in the shade – a nice touch.

Going into their gift shop before seeing the gardens proper, I met a nice lady volunteer who immediately pointed me to their book section. I wanted a book on NC wildflowers because I had earlier found a blooming roadside vine that my Southeastern wildflower book didn’t have, and figured that, as long as I was going to be spending a lot more time in NC, I needed a local flora book. They had several, so I bought Justice, Bell and Lindsey’s Wildflowers of North Carolina. Much to my chagrin, it did not have the plant I wanted identified, but out of the back rooms came Jake, a local naturalist who was able to finger the plant and also gave me a personal tour of some of the resources at the headquarters.

It turned out that the plant is Clematis terniflora, an invasive exotic from Asia. Jake related some growth and kill-attempt experiments he had done on the plant, and folks, it’s bad. You almost can’t kill it and it grows faster than kudzu! Cry your eyes out over this beauty: 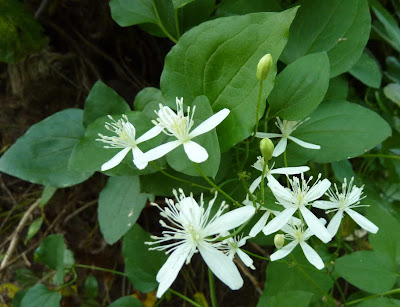 Anyway, off I went with my new book under my arm to tour the place, and it was with sublime joy that I discovered that this botanical garden is totally dedicated to native plants. There were coneflowers, sunflowers, Solomon’s and false Solomon’s seals, at least 3 kinds of violets, blue curls, cardinal flower, and numerous species of shrubs and trees. Most of the flowers were in my new book, so I was able to read about them and compare the pictures to the real things!

Blessedly, there were more identification labels on the plants than I have seen at any botanical garden in any of my travels. Each label had the common and scientific names plus family names. Many of the more common plants were identified by several labels scattered throughout the garden so that, if I forgot a name, and I did, I was able to see it again and sometimes again and again.

And it wasn’t as if they had only a few specimens of each plant. Oh no! They often had hundreds of each species and the beds are packed with them, although some of them were indeed rare. In most botanical gardens, rare plants are kept unlabeled and in inconspicuous places where you wouldn’t ordinarily look for them to protect them from thieves. Well, I am sure they did some of that, too, but a few rare species were prominently displayed and labeled, and furthermore, when a roving gardener saw me paying special attention to one plant that shall remain unnamed, he (ahem) obviously recognized that I was a special person and sidled up to me to tell me about some more rare plants that he knew I might otherwise miss. What a nice man.

In deference to protection of the rare flora, I shall relate only one of those, Franklinia alatamaha, a plant that I have been looking for all my life, and now that I am 62 I have finally gotten to feast my eyes on it, say Hallelujah!!! I know of a few other botanical gardens where it supposedly occurs, but it was always hidden when I visited. Franklinia was discovered by John and William Bartram in 1765. William retrieved seeds in 1777, germinated and brought them to flower and named the genus after Benjamin Franklin. William remarked that he never saw it growing anywhere but the original 2- to 3-acre site where he and John had found it. Its last verifiable sighting in the wild was in 1803, and all the specimens in the world are descendants of the seeds collected by William Bartram. It is said to be commercially available, but I have asked about it in maybe a hundred plant nurseries throughout the Southeast but have received only blank stares in return. So please, kind folks, if any of you know where I can score some nursery stock, run don’t walk to your emailer and inform me! Oh, incidentally, not only did I get to see the beast, it was in flower and I got a decent photo of it: 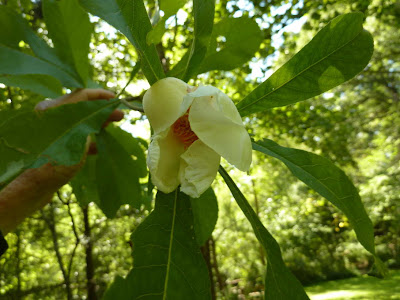