Marshall Swamp - A Chapter in the Book of Nature

Last Sunday morning (Nov. 21) was spent on my second Meetup.com day-hike on part of the Cross-Florida Greenway, accompanying 14 other North Central Florida Explorers led by Linda Duckworth on the 2.5-mile Marshall Swamp trail east of Ocala. We walked the trail from the CR 314 trailhead to the 64th Avenue Trailhead, plus a little loop on the far end, totaling 6.1 miles. This was my second time here, the first being on a bike ride last May. After the day-hike, we went to Tracy’s Restaurant on the north side of Ocala for fish sandwiches and soda (Tracy’s deserves its own blog post).
A few of the little treasures we experienced were a mild sweetgum “seed rain,” a small colony (clone?) of toothpetal bog orchid (Habenaria odontopetala): 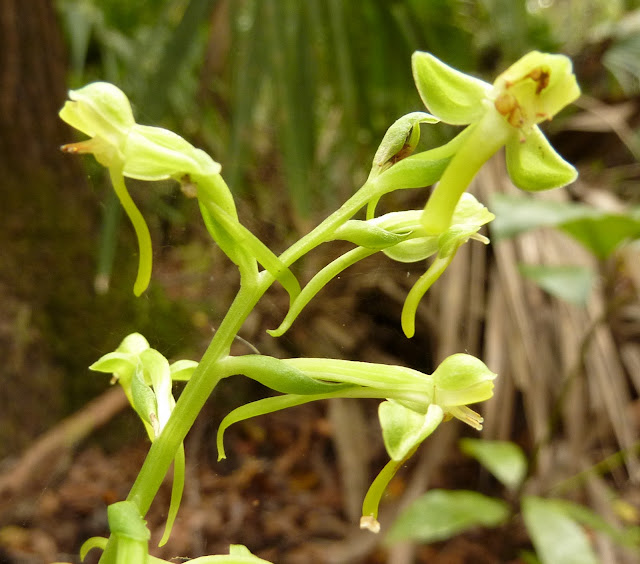 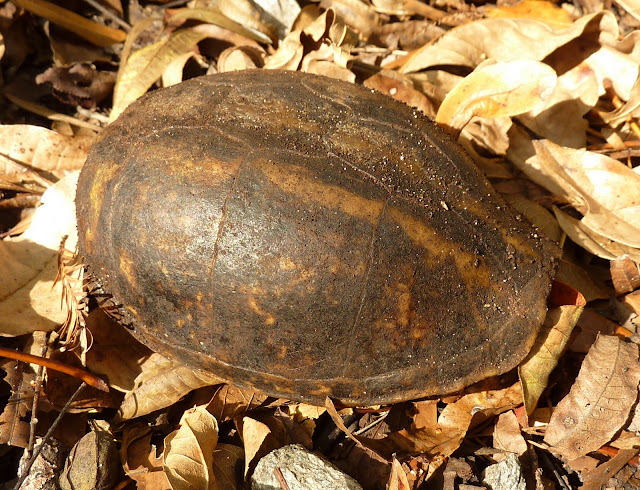 The rest of the group walked faster than another fellow and me because the two of us stopped to take photos along the way. Eventually, I quit continually trying to catch up and just lapsed into a solo routine at the end of the line for most of the trip back. I had noticed some uncommon flora and wanted to photo-document it, flora that eked out a living on the buttressed bases of cabbage palms (Sabal palmetto). It occurred to me that this is a neglected microhabitat – why, I bet not one scientific journal has been dedicated to it – so I resolved to give it some attention. Yes, I am easily amused and you may laugh, but I made several anecdotal observations about cabbage palm root balls that may be new to science, so there! 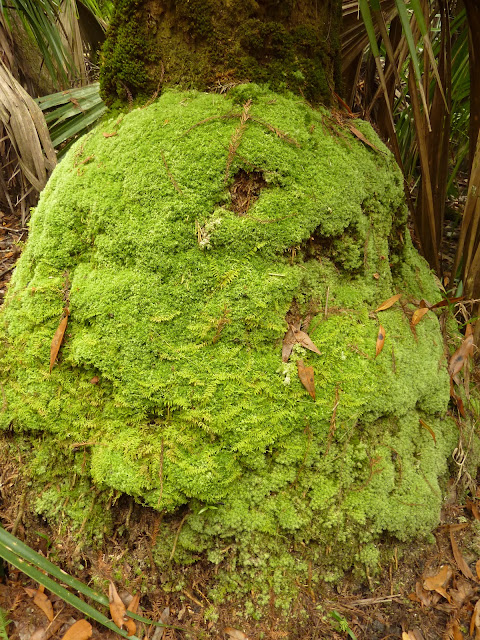 In a swamp like this where it is wet or moist for much of the year, some but not all cabbage palms sprout a mass of roots at the base of the trunk, coating as much as two feet of the stem. These exposed roots are seriously shaded by several layers of leaves in the mature floodplain forest. The roots are dense and hard and grow parallel to each other with little if any space between them. It is a moist but otherwise inhospitable surface, yet is transformed by weather slowly eroding the outer roots. The raggedy surface thus created easily collects peat and inorganic sediments, making a decent substrate for small plants whose roots then tie the whole mass together in a natural Bonsai microcosm.
Cabbage palm root mass flora is dominated by mosses (actually bryophytes) that form a luxuriously thick carpet, interspersed with such things as panic grass, common blue violet, whisk fern and strap fern, even the odd green-fly orchid, all crisscrossed by vines such as partridgeberry and poison ivy. As the plants burgeon on the root ball over time, the peat soil grows thicker and richer, and so presumably does the number of plant species (now there’s a student science project!). And whenever a patch of the carpet moss is broken off, the newly exposed peat is a perfect little seedbed for shade-tolerant plants.
The first thing I noticed was that cabbage palm root masses sustained more plant life than pretty much any comparably-sized piece of ground, hunk of deadwood or buttress of any other tree species. Here is an old hardwood with "knees" to the ground that has a good growth of mosses and ferns at its base, but even this is not as lush as the growths on the cabbages: 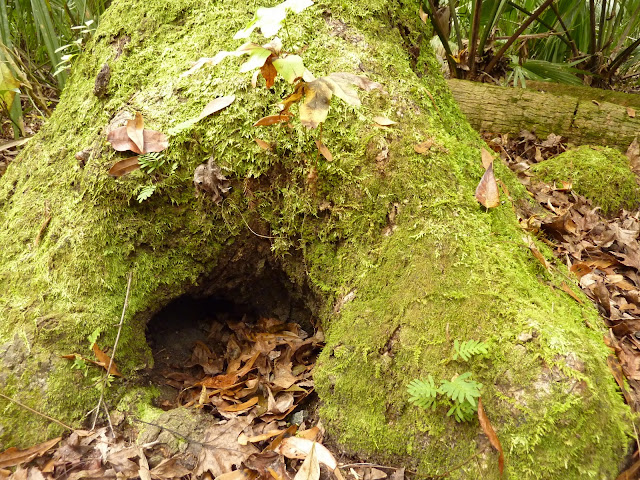 Too, as you look through these pics, notice that the ground surface is more often than not almost devoid of small plants. Indeed, it can seem to be a veritable desert for little herbs. The second thing I noticed was that some plants when growing low to the ground occurred only on cabbage palm root balls; these species include whisk fern (Psilotum nudum): 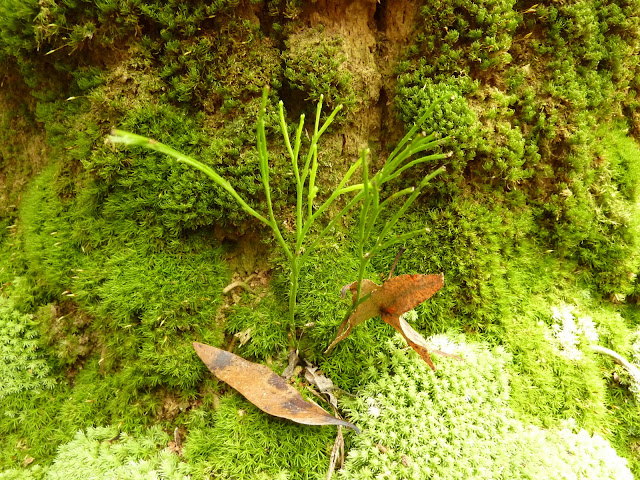 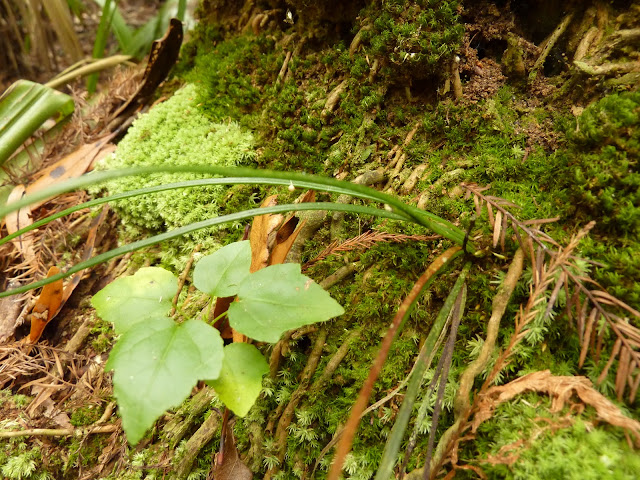 and goldfoot fern (Phlebodium aureum) (the root ball on this cabbage palm is well above the ground): 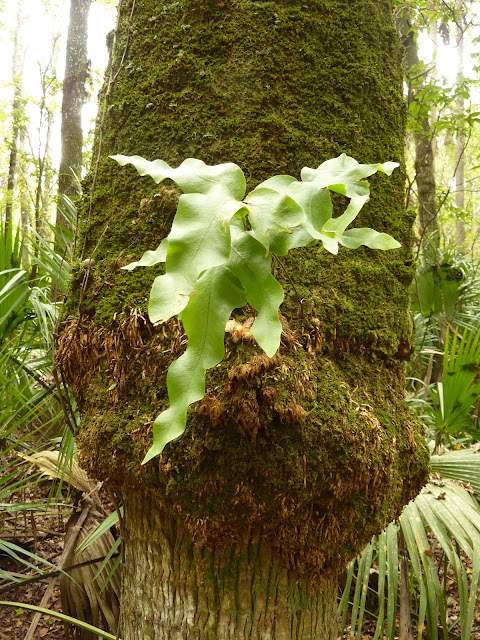 Third, although mosses are less picky, also growing on other types of wood both living and dead, nowhere were bryophytic mosses carpeting their substrates as profusely as on cabbage palm bases. 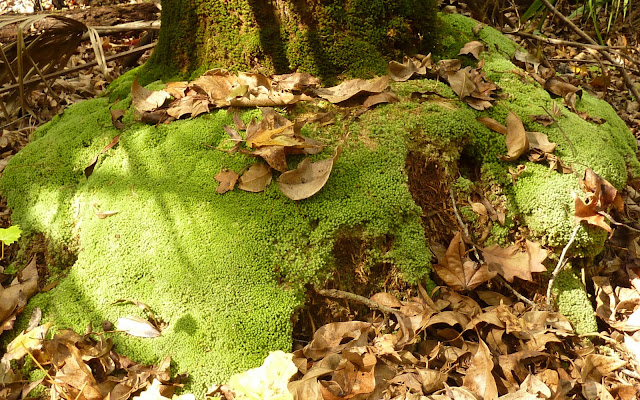 Fourth, I noticed that it looked like this swamp’s cabbage palm root masses were rarely if ever totally inundated, unlike the forest floor, and if so it would mean the root masses were elevating small plants above the flood line. 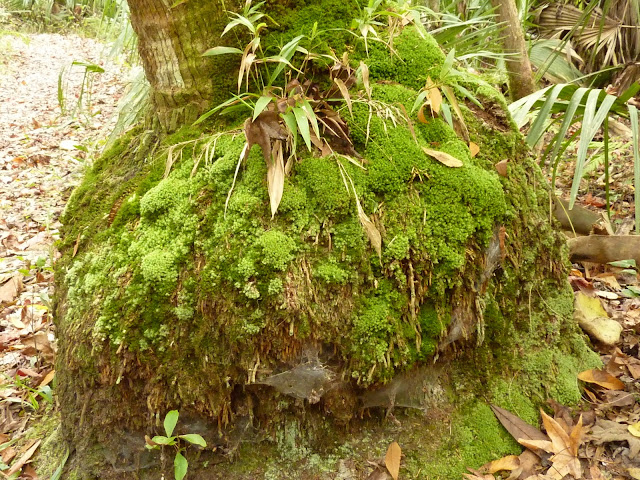 A keystone species is one that other organisms require the presence of in order to carry out their life cycle. Although at first blush it might seem that cabbage palm bases perform this function, in fact all the species mentioned do well in other habitats. The goldfoot fern and green-fly orchid (Epidendrum conopseum), for example, prefer to grow in the canopies of cabbage palms and live oaks, respectively, mosses occur on many substrates in the swamp and violets occur on the ground in the swamp and elsewhere. The cabbage palm base microhabitat stands out by perhaps providing the best habitat in the swamp for certain species, thus being a platform for “parent” plants to re-seed the ground after flood waters have drowned low-growing vegetation. 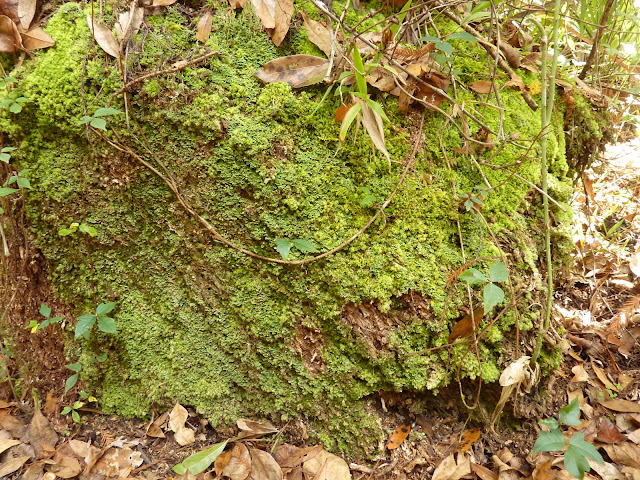 I like to say that I read “the book of nature” when I’m in the field, each soil type, weather formation and plant species being a paragraph or a page of the tome. It absolutely delights me that I will never get to the end of the book. Even in my sixties, I still encounter new script worthy of marvel on every outing. I truly pity those whose careers were spent doing things they never again want to do upon retirement and am immensely saddened upon hearing that someone is bored with their retirement.
Posted by Buford Nature at 10:53 AM