I certainly can’t complain about being bored last weekend, having gone to a fire management workshop Saturday morning, a 9.5-mile bike-n-hike on Saturday afternoon and on Sunday a short, 2-mile hike around Irvine Slough followed by quick visits to Charles and Christian Springs in Suwannee County (FL).
The workshop was held at friend James’ place. He is a member of a local group taking advantage of a state program that works to reduce fire hazards in low density residential areas by instituting regular programs of controlled burns. His group is called the Watermelon Pond Community Cooperative. James lives on a sandhill ridge that was originally vegetated by a fire-dominated xeric ecosystem. Adjacent to his property is a unit of the Goethe State Forest, which supports the same habitat and also needs prescribed burns. State land managers realize they can protect and manage state forest lands better if adjacent landowners are on board with fire management. It seems to be a good program where one hand washes the other. This photo of James talking about the program as it pertains to his land should give you a glimpse of what the immature but species-rich woodland is like: 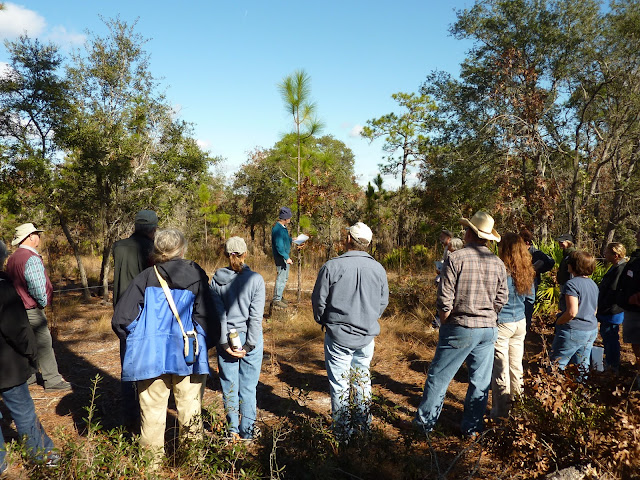 Bruce, Brack and I then met up with Jere to check out two caves that are small and very unstable, and at times downright dangerous. As you may know, many of my friends and I are ardent cavers, but we stay out of these particular caves due to the ever-present danger of rock-fall in them. Both occur in locations that are highly active geologically. The entrance to the first cave is usually choked by detritus, as pointed out here: 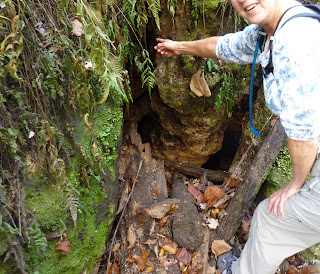 In the past, the second cave’s entrance has been in the face of a very steep sinkhole a few feet above ground surface, but that old entrance is now almost totally obscured by a small landslide. In some kind of zero sum karst game, however, a new entrance has opened up at the base of the side slope. The old entrance passage was a horizontal, hands-and-knees crawlway about 30ft long that continued onward past a boulder that blocked cavers from going further. The new entrance is a spiraling, vertical route through boulders. Think of it as a fissure or solution pipe filled with boulders that you must squirm between as you wiggle downward while exploring onward. The boulders seem to be pretty solidly set in place, but that is only for the geological moment.
Getting into the second cave requires passing through a fairly tight, Y-shaped vertical slot. How tight is it? Well, I had to take everything out of my pockets and then remove my belt in order to pass it, that’s how tight it was, and I’m thin. I should also point out (in case the helmet police look at my photos) that it was too tight to wear a caving helmet. I was able to down-climb 12 – 14ft to an apparent end in recent sediments, and noticed that air was blowing through boulder slots a few feet above that dead end. Jere noticed that air was also flowing out of the old entrance remnant. Here’s a shot Bruce took of me emerging from the new entrance looking tired: 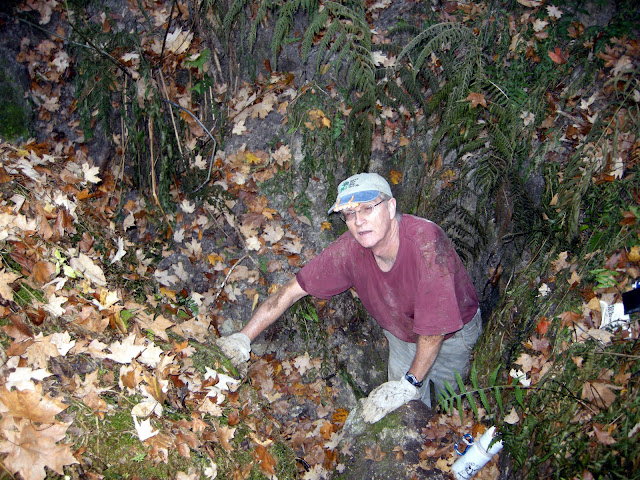 On Sunday, Bruce, Chuck and I went to Suwannee County to Chuck’s property on Irvine Slough. This area has a couple of karst windows that are entrances to the entirely-underwater Telford Spring Cave, and are named Luraville I and Luraville II (after a nearby town). As the Suwannee River rises during wet seasons, tailwaters back up into Irvine Slough and drain into the Floridan Aquifer via Luraville I and II (and a lot of other karst holes). When the wet weather ends and the river level drops, these so-called “siphons” reverse flow and become springs that discharge back to the river. As water levels continue to fall, surface flow in the slough ceases, the slough dries up and Luraville I and II look almost stagnant. This type of karst entrance with spring-siphon-stagnant characteristics is called an estevelle, and these are abundant along the Suwannee River in north Florida. Charles and Christian Springs are also estevelles.
I have cave dived into both entrances in the past and can report that their passages contain more wildlife than the vast majority of Florida caves. The high abundance and species-richness is due to the periodic pulsing of floodwaters because floods bring nutrients, fish and wildlife into the caves. Trapped there when water levels fall and the surface water connection to the river is broken, fish and invertebrates then eat each other until the water rises again. If it doesn’t rise quickly enough, well, as they say in The Highlander, in the end there can be only one. I’m betting the last standing fish in the current episode will be this predacious bowfin (or mudfish, Amia calva): 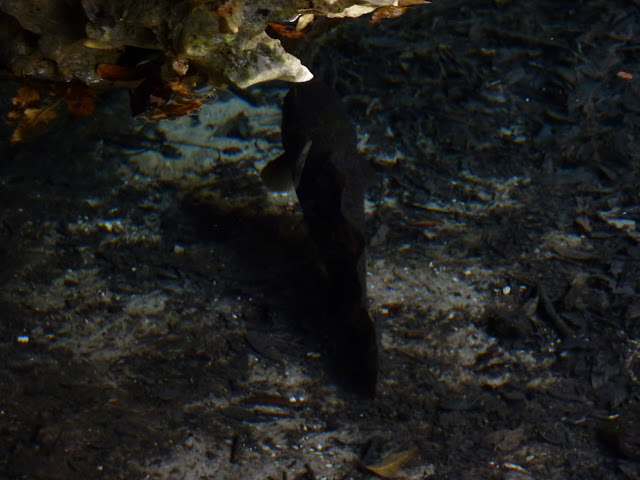 In addition to being a competitive predator, the bowfin can burrow into the mud when surface waters dry up and wait out the drought.  It is one of the few freshwater fishes alive today that lived during the reign of the dinosaurs. Its air bladder is lined with blood vessels, so it serves as a lung that the mudfish can use to gulp air (oxygen) when surface waters are nearly devoid of the stuff. It is thick-headed, having a double-skull and a covering of large, hard scales. The male makes a nest on a mud bottom, and after convincing a female to lay her eggs there, he fertilizes them and then protects the eggs and fry aggressively for several weeks. It is a strong fighter when hooked and will try to bite anglers when pulled into the boat using sharp teeth that draw blood. To add insult to injury, they don’t taste good, their meat supposedly tasting soft and mealy. In short, they are uberpredators, have hard heads and sharp teeth, are feisty, protect their young, “breathe” both water and air, can survive the pond drying up and taste bad too! It is no wonder that the species has survived maybe 100 million years.
That’s a pretty amazing record when you think about it. After the bowfin evolved, thousands more species of fishes evolved of which many have become extinct, yet this ancient taxon is still a top piscean predator where it occurs. It’s right up there with gar, sturgeon and the coelacanth.
Irvine Slough also has small, shallow caves that are dry most of the time. Chuck showed us several holes in the ground, two of which are the terminal entrances to a 30+ ft long cave passage. Here’s the entrance to a small, nearby cavern, with Bruce hunkered down in the entrance for scale: 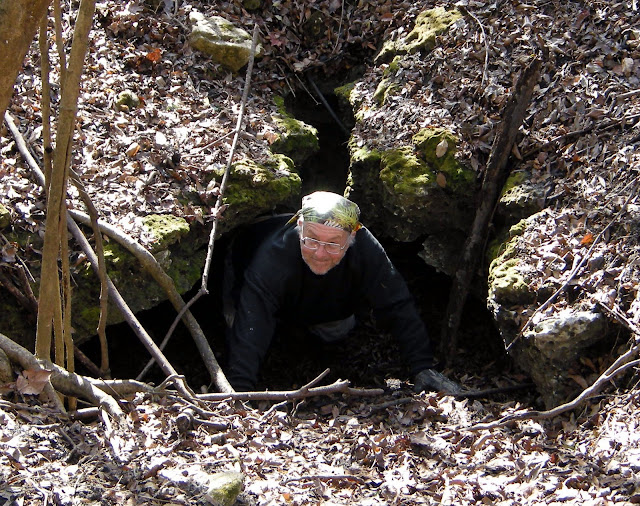 Other holes out there are the entrances to small caverns, but most of them appear to be “ratholes,” so to speak. They may or may not shelter rats, but armadillos, snakes, mice, opossums and skunks have been known to take dry season advantage of these refuges. A few years ago, Bruce and I saw an indigo snake (Drymarchon corais couperi) in Peacock Slough, a similar karst swale located less than a mile away. The indigo is a federally-threatened species that depends on such ratholes for shelter. I’d like to do more cave surveys out there in the not-too-distant future.
Posted by Buford Nature at 6:51 PM