As mentioned in my On Rappel blog dated January 8 (onrappel.blogspot.com/2013/01/2011-torreya-seed-germination-second.html), I have enjoyed excellent success at germinating 2011 seeds of Florida Torreya trees, Torreya taxifolia. Since then I have learned that other Torreya Guardians have also had relatively high germination rates with the 2011 seeds, with one fellow getting 100% germination success! Then a few days ago, a ninth seed of my ten germinated: 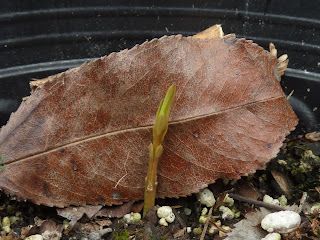 The photo below shows six of the nine at their current height of 3 to 4 inches. Each pot has two seedlings, one of which sprouted in the summer of 2012 and a second that sprouted during the current mid-winter. Judging by their robustness, the winter sprouts are evidently doing as well as the summer seedlings. This dispels an earlier concern; nonetheless, I will protect them when frost is forecast during the remainder of the winter. 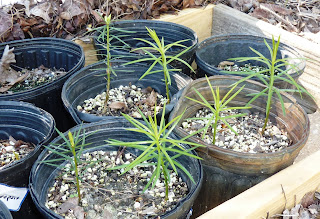 Posted by Buford Nature at 4:28 PM