The Oklawaha River and Hopkins Prairie in the Ocala National Forest were our destinations the weekend of March 29 – 31. Marcie and I met at the county boat ramp at SR 40 on the Oklawaha at 0830hrs and did a kayak shuttle upstream to the county park on the river at SR 40 where we put our kayaks in the water. It was a briskly cold morn, but by the time we started paddling the air had warmed up enough that red-bellied turtles and Peninsular cooters (Pseudemys nelsoni and P. peninsularis) were out sunning themselves. This is a red-bellied turtle: 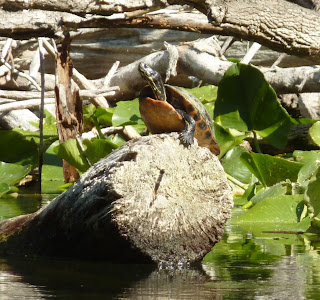 By the way, it is herpetological dogma that turtles will not sun themselves unless the air temperature is warmer than the water’s. We also lucked onto a brown water snake (Nerodia taxispilota) sunning itself on a clump of Bartram’s bromeliad (Tillandsia bartramii) that was unlucky enough to hitch its wagon to a doomed riverside tree: 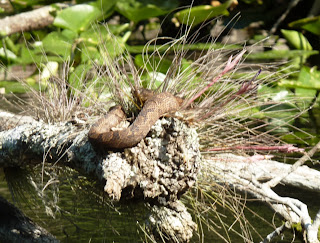 Only a few alligators were seen, but fortunately, this five-footer sat still for a photo-op: 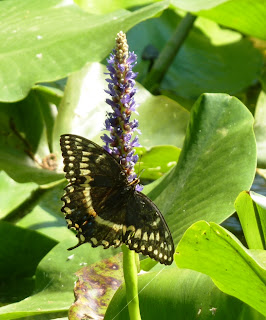 A troupe of about ten rhesus monkeys (Macaca mulatta) came down to the river’s edge to beg for handouts. Or, should I say demanded handouts? When they realized we weren’t going to subsidize them, one became very angry and screamed and snarled at me. Boy was I glad it wasn’t in my boat! 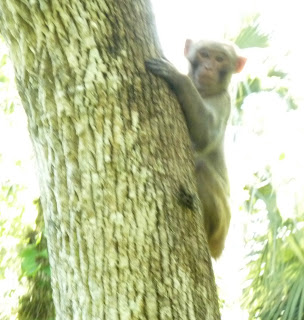 Why, oh why doesn’t the state exterminate them? Hasn’t the Florida Fish and Wildlife Conservation Commission (FWC) heard of the mesopredator effect? Have you heard of the mesopredator effect? In the olden days, when there were still plenty of large carnivores, the panthers, wolves, black bears, and bobcats would keep medium-sized predators in check. Europeans, Africans, and Asians then invaded the country and killed off most of Florida's panthers, all of its wolves, and extirpated the black bear from most of the state. This released medium-sized terrestrial predators from their natural population controls, allowing them to greatly increase their populations. These include the gray fox, raccoon, opossum, weasel, striped skunk, and spotted skunk. To that list, we must add the red fox, domestic dog, domestic cat, and feral hog, all of which are introduced species. The latter three now exist in enormous numbers. The absence of the wolf and the replacement of Eastern North American forests with agricultural and suburban habitats also created ideal habitat for the coyote, which promptly invaded and now is abundant in the East. Mesopredators are now far more numerous than they ever were before, so now they have a far greater impact than before on prey species like ground-nesting birds, rodents, shrews, moles, snakes, frogs, and lizards. Rhesus monkeys are quite pernicious, as they prey on tree-nesting birds, lizards, frogs, bats, gray squirrels, flying squirrels, and rat snakes that are almost immune to ground-dwelling mesopredators. I wonder what it is going to take to convince the FWC to extirpate the rhesus monkey from Florida. After all, there aren’t many of them yet, so it would be far easier and cheaper to cull them now rather than wait until they are as populous as, say, the feral hog. Write that agency’s Commissioners and let them know what a huge mistake they are making by letting the monkeys flourish.

Ok, back to the river. The occasional string lily (Crinum americanum) was blooming: 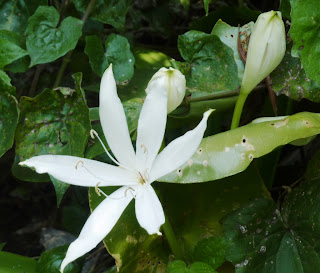 This Florida elm (Ulmus americana var. floridana) evidently got its start on a stump that later rotted completely away, leaving the elm to look like a tropical tree with prop roots that aren't quite strong enough to keep the tree upright: 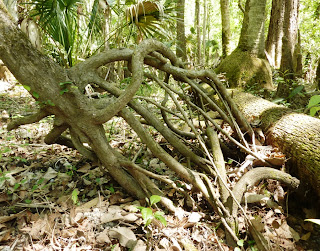 Marcie is a happy paddler after lunch: 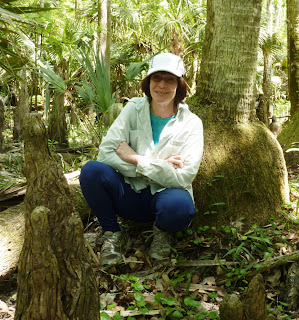 After two days of kayaking, we were ready to get off our butts and hike a little on the Florida Trail, so we headed over to Hopkins Prairie for a birding stroll through the scrub: 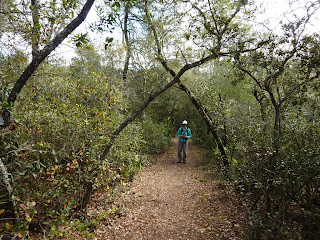 We spotted a clan of my favorite birds, the Blue-gray Gnatcatcher. They come readily to psh-psh-psh calls. We also hiked around a portion of the prairie, which was almost entirely dry with only a few deep spots, doubtless sinkholes, containing water. Its herbaceous vegetation is still brown from winter dormancy as you can see from this shot past a bat house: 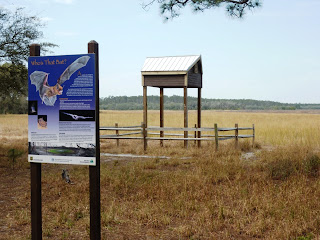 Looking up into the bat house, all I could see were mud dauber nests. Perhaps the bats are there only in the warm months?

Note: Thanks go to Marcie and Bruce for some corrections on butterflies and the snake.
Posted by Buford Nature at 5:04 PM