There’s a mystery a-cooking in the cays of Cedar Key.

A long-time major seabird rookery on Seahorse Key was suddenly abandoned this spring and the cause is currently unknown. It’s all over the north Florida online news. Now comes word that seven raccoons have been trapped and relocated from the island, and the trapper believes that eight or ten raccoons were on the island when the birds fled. However, raccoons are not known to be a serious predator of rookeries, and broken eggshells found under the nests showed no sign of destruction by raccoons.

The trapper noted that these raccoons were sleek and robust and just sat and looked at him from the cages, whereas in his (and my) experience, trapped raccoons are snarling, snapping, lean wild beasts. This indicates that these particular raccoons were subsidized by humans, and together with the eggshells, were not the cause this avian catastrophe.

I camped at a state park in west Florida in the late 1970s and saw about 20 (maybe 30) raccoons and feral cats come out of the woods when the sun set and a full moon rose over the campground. Laying in my sleeping bag in the pickup truck bed, I looked out the windows of the camper top and watched them forage around the campground, kind of like watching an African savannah wildlife show on TV. Unabashed pilferers, each worked the campsite independently, investigating every camper nook and cranny like a regiment of army ants blanketing and repeatedly gleaning a patch of ground. I watched as a raccoon broke into a neighbor's ice cooler (park signs gave fair warning). One animal even tried to dig up through the steel bed of my pickup truck as I lay above it admiring its tenacity while at the same time being astonished that park staff didn't trap them out. It would have been easy to trap them out. Alas, I didn't get out and see what these scavengers would do if I walked through them; maybe they would have just sat there and watched me.

It doesn't take long to trap 10 campground raccoons and run them over to an island in the middle of the night. My best guess is that some dingbat finally got tired of them stealing from a backyard zoo (county park, farm, shelter, trash dump, hoarder...), and not wanting to kill the poor wittle things, got a holding cage and a couple of traps and a boat.

OTOH, if you like raccoons and collect them over a period of a few years in a big backyard cage, and then get tired of having them around but can't bear to kill the poor wittle things, well then, dumping them on an island where they can't find their way back home might seem to be an option to the thoughtless.

We found a set of raccoon tracks on nearby Atsena Otie Key in 2010: 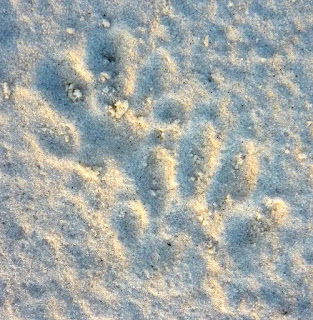 How did that raccoon get there? I just assumed it swam there, or accidentally drifted over during a storm. Seahorse Key is much further from land than Atsena Otie, so a raccoon would have to like swimming over feeding shallows against tidal currents at night. Raccoons swim just fine, although they are not strong swimmers. But I don’t know…

What if some backyard zookeeper is periodically trapping a mess of raccoons and dumping them, first on this island and then on the next? Heh, even the Seahorse Key trapper is relocating the ‘coons somewhere. I wonder where? Another island? Another stewpot?
Posted by Buford Nature at 9:05 AM