Cottonmouths are not what they sometimes seem! 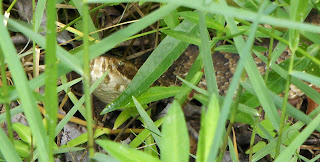 In one of herpetologist Dr. Bruce Means’ books – I forget which one – he details how he deciphered what actually occurs when it appears that a water moccasin, or cottonmouth (Agkistrodon piscivorous), attacks a person on shore. It is too longish a little story to place within a Facebook reply, so I am going to paraphrase it here for ready reference. Obviously, you should read Bruce’s books rather than rely on this or any other second-hand account of his adventures, not just to keep the facts straight but also because his books are fascinating!

While walking along the edge of a lake one day, a cottonmouth suddenly came downhill straight toward Bruce moving about as fast as a fat serpent can go! Startled, Means jumped back and watched as the snake dove into the water and disappeared. Whew! THAT was a close call! But Bruce had beaucoup experience with snakes in general and water moccasins in particular, so the appearance of an attack didn’t wash. Giving the situation some thought, he concluded that the snake was actually just trying to escape but that he was inadvertently blocking the route to its refuge. Hmmm… How to test this?

Ahah! He got it! He began wearing snake boots – just to be safe about it! – as he took his walks around the lake, and being also intellectually armed for the next encounter, he sacrificed his body as bait to test his hypothesis in the finest tradition of inquiring minds. Sure enough, the same thing happened on another day, but this time he was scientifically prepared if not emotionally detached, and this is what he saw on this second rodeo:

The cottonmouth suddenly found a giant predator (Bruce) standing directly on top of its well-worn path leading from its comfy sunning spot to its aquatic habitat. Panic set in! Desperately, the snake launched itself toward safety, blundering right between Means’ legs. Paying no mind to the giant’s snake-booted limbs, it continued pell-mell into the water and had its escape. “Whew! The giant didn’t get me THAT time!”

Posted by Buford Nature at 8:25 AM