In my peregrinations to find interesting geologic features of the state’s granitic gneiss high elevations, Sunday I set off for the north side of Stone Mountain where Google Earth depicts a line of steep exfoliation cliffs, rugged terrain below the cliffs, and a mature hardwood forest. Unfortunately, the park has no official trails leading to the cliffs, but I hoped that rock climbers had some guerrilla trails I might stumble on and follow. Nope. Ain’t. The best I could do is hike up Rocky Ridge Trail (#75) from Old CCC Road and then strike out off-trail. It was an easy start, only about a 30 degree slope, and I headed a little east of north up to a saddle. From there, I wanted to angle off more to the east, but thick rhododendron contraindicated that so I continued on the previous direction to skirt it and followed the contour. Still pretty easy.

The rhododendrons soon forced me to alter direction toward the southeast and uphill, although still only a 30 degree slope. I was at an elevation of 2900 ft at that point, which was about what I thought would be the base of the cliff line. I tried to follow that contour but the rhodos kept pushing me slightly uphill for a quarter-mile until I encountered a low, wide rock shelter along the 3000 ft contour. This feature was at the base of a talus field that was about 100 ft in elevation below the cliff-base line. I stopped there for a moment and discovered that, alas, I had forgotten my flashlight, so I bellied down and waited until my eyes were accustomed to the dark to see what I could see. Not much. The shelter just got lower and lower from its entrance, which itself was only about 2 ft high.

I continued to hike slightly uphill on the by now 45 degree slope. Talus fields are hard to negotiate. The ground around these boulders ranges from a relatively easy 45 degrees to almost vertical, the talus fields support dense rhodos with intertwining branches, dead twigs want to jab your eyes, rhodo leaves are large and block your vision of the ground you walk on, the terrain is dark and snaky, holes between the boulders are covered with leaf packs that do not always hold your weight, and greenbriar vines are common to abundant.

Time out. My Florida friends do not understand mountain greenbriar (Smilax sp.). Florida has much, much more greenbriar than these mountains harbor, but… Florida greenbriar will prick you and draw a drop of blood or two, but if you are careful, you can walk through infested landscapes receiving only a few minor scratches from their flexible little (eighth- to quarter-inch) spines. Mountain greenbriar, however, has up to half-inch long inflexible rakers that are flattened laterally, the tips of which are way sharper than Florida greenbriar and their edges are razor sharp. All you have to do is barely touch a mountain greenbriar and you have a cut that will bleed profusely for several minutes.

Whatever, I scrambled up another 100 ft in elevation and tenth-mile through that crap to the base of the first cliff and immediately spotted an Eastern box turtle (Terrapene carolina carolina). As the photo vaguely shows, there were some dings on the chelonian’s carapace that looked like teeth marks from a mammal larger than a canid or bobcat. I’m guessing the turtle was attacked by a bear, but don’t really know. It seemed to have healed from the one-sided battle. I ate lunch (not the turtle) and moved on. 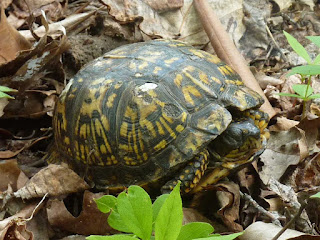 Continuing more-or-less along the 3000 ft contour, I inspected several more exfoliation cliffs, always seeking the path of least resistance through the rhodo thickets. At that point I was pretty tired, but determined not to return the way I came. You cannot go back the way you came, it’s a Rule, so when I came to a non-rhodo-covered 45 degree slope I began angling uphill toward a low lateral ridge that I hoped would take me to the Stone Mountain ridgeline where an official trail would take me to my ride. It almost did, but things changed after another tenth-mile to a horrid 60-70 degree slope covered with boulders, rhododendron, mountain laurel, wild azalea that didn’t have the courtesy to be blooming, highbush blueberries that didn’t have the manners to offer fruit, and greenbriar that was even more abundant than before. Sigh. Furthermore, galax grew lushly and obscured the ground, and I just knew that I was passing close by invisible timber rattlers and copperheads. Man! In places like that, you’d better not reflexively stick your hand out to the ground to steady yourself when you stumble. Grab the rhodo stems instead! I spent an hour-and-a-quarter thrashing my way through 0.8 miles in that horrible place. I could only think of my goal. Ridgelines are supposed to be drier and support shorter trees and a more open understory, and that was supposed to be my salvation. Nope. Wasn’t.

Just when I thought it couldn’t get any worse… I couldn’t yet make it to the ridgeline, specifically up a knob along the ridgeline, because that awful knob was worse than anything I had gone through so far. Steeper terrain, denser rhodos, more greenbriar, downed logs and limbs, and everything covered with slimy lichens and slippery sphagnum moss. I had no choice but to continue through the lesser of the two evil rhodo thickets. I was out of water. I thought I was gonna die there and be found only by hungry scavengers, my wasted bones scattered amongst the rocks and rhodos, and eventually overgrown by sphagnum.

But no! After only another fifteen minutes and a tenth of a mile, I broke out of the thickets growing on and surrounding Hateful Knob and onto the ridgeline and AN OPEN UNDERSTORY!!! Hallelujah! And to make matters even better, there was a vague trail leading along the ridgeline exactly in the direction of my parked pickup. I followed the trail west for another half-mile and 20 minutes to the official mountaintop, gaining another 600 ft of elevation. There, I was rewarded by scenic views that I could not have cared less about and lowbush blueberries sporting a few ripe fruit, which I gobbled down to quench my thirst. Wild blueberries are sweeter than ag blueberries despite being smaller. Heh, most of the people I run into on the mountaintops are afraid to eat them, and I shamelessly pander to their fear (“No! Wait! Don’t eat that wild fruit! Let me save you!”) 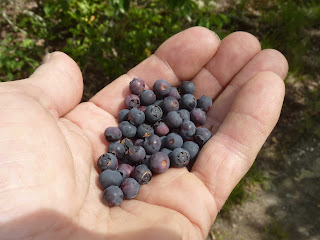 After that, I grudgingly took the well-beaten trails back down the hill, but only because you can’t go back the way you came. Seriously! Total time was 5:25 and total mileage was 5.9. It was not a death march like some of my off-trail hikes, but it was hard, maybe the hardest trek I have done since moving here. The friend who accompanied me last weekend wearing a 40 lb pack will doubtlessly be glad that she was not with me today and wearing another heavy load.

So Tom, bring Jimmy and the gang up from Florida sometime and we’ll go out and play!

Note: I would have added a Google Earth pic of the route I took, except that for some unknown reason my Garmin software won’t hand off the track to GE. It used to do so easily, so I’m going to call Garmin soon and see if this can be remedied. If so, I’ll update this missive.
Posted by Buford Nature at 2:01 PM