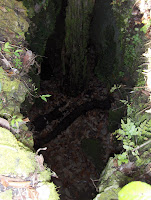 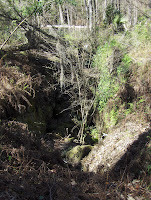 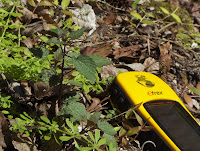 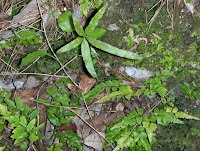 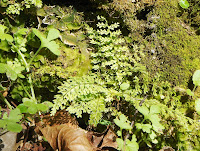 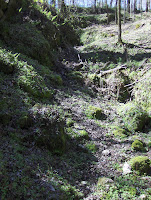 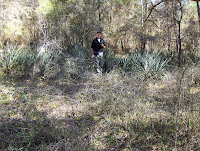 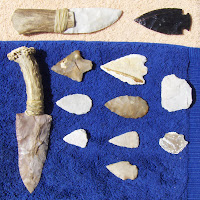 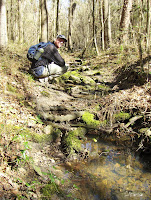 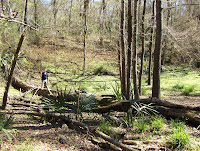 (Please note that the process for adding photos on Google's blog system is primitive. Therefore, they are in reverse order of where they are mentioned in the text, so you must start with the pic closest to the text and move up from there).
I needed to work yesterday (Tuesday, Feb 19, 2008), but it was such a beautiful day and Brack called, so we took off and went mtn biking and woods wandering instead. The goal was a disappearing stream leading to some caves I hadn’t seen or heard of before. Little was I to know what a fine decision we made! We parked at the home of his brother’s former lover, geared up and biked off down a trail road thru planted pines.

The setting is in a physiographic province called the Ocala Hills, formed as eroded remnants of the Hawthorne Formation lying atop limestone. The Hawthorne Formation is a sandy, phosphatic clay containing chert (similar to flint) nodules, phosphate nodules and sea fossils like shark’s teeth.
The Hawthorne is impermeable to water, so creeks drain its uplands. Where groundwater dissolves large voids in the underlying limestone, sinkholes form and provide routes for surface waters to sink into the Floridan Aquifer. The first photo on the right is the terminal sink of a very small, intermittent drain that was the first one we encountered. The water here sinks into three tiny sinkholes each not much larger than a washtub.
The stream photo (second on left) shows Brack kneeling beside a picturesque riffle-and-pool brook with a rocky, rooty bottom. You can also see leaf packs, which form when running water pushes leaves up against a rock, root or other obstruction, and which provide valuable habitat for myriad aquatic insects.

This edaphic setting is ideal for mixed deciduous and evergreen hardwood hammock forest to flourish. Most of this habitat has long since been converted to cattle and horse farms or loblolly pine (Pinus taeda) plantations, with the native hammock being largely restricted to karst outcrops too steep for pasturage. This can be seen in the second photo above, where larger trees have been left beside the creek but have been harvested and replaced by smaller trees away from the stream.
In the olden days, the province’s chert nodules apparently provided the basis for a prolific flint-knapping industry for the state’s aboriginal inhabitants. Having done some knapping myself, I can personally attest to the abundance and good knapping quality of the chert in these parts. The third photo shows two chert-bladed and antler-handled knives, and a black and brown-streaked obsidian blade made by a deceased friend of mine, Eric; seven chert spear and arrow points that I made, and two typical chert percussion flakes (debitage).
On our trek to the next karst spot we found some of the healthiest bear-grass (Yucca filamentosa) I’ve seen in Florida’s wilds. It normally has a low growth habit out in relatively open sunlight, so perhaps it germinated in the open before the small second growth trees grew up, which accounts for their robustness, then as tree shading increased the bear-grass plants began growing taller to reach more sunlight (fourth photo).
Moving onward we finally arrived at the main karst goal of the day. First encountering the stream pictured in photo 1, we followed it downstream toward a low ridge. In this 5th photo, you can see where this (dry) portion of the stream (lower right) sinks into a log- and limb-filled sinkhole (mid-right). Storm water also drains down the side of the ridge toward the photographer and sinks into several other small sinkholes behind the “steps” in the mid-background.

Usually, streams flow away from ridges, but the reversal of the norm is part of the magic of karst. The ridge is actually a limestone pinnacle covered with a very thin layer of limey, clayey soil, being a mixture of remnant Hawthorne Formation and decomposed limestone, plus a lot of organic detritus. The stream above sinks into the ground at the base of the ridge. Unfortunately, these lower sinks cannot currently be entered because they are plugged by loose sediments.
But just below the summit of the ridge in the mid-top of photo 5 is an entrance to the cave below via a crack formed by fracturing of the ridge’s bedrock. This entrance (photo 6) leads to a sloping floored, small chamber only high enough in the center for several people to sit comfortably. We counted 11 little brown bats (Myotis austroriparius) hanging singly around the room. I looked closely at several of them but saw no evidence of “white nose syndrome,” a dreaded affliction that is killing large numbers of bats in the Northeast US.

We donned caving gear and crawled our way up and over the ascending entrance room floor, which was only 18 inches or less from the ceiling, then to the left in back of the room is a narrow joint-controlled passage leading down in stepped fashion to a passage trending NNW-SSE. To the NNW the passage is appx 3ftW x 2ftT, and leads perhaps 75ft to a low bedding plane passage that is 6 inches or less in height. To the SSE the passage is mostly the same size as the NNW passage but in one place being 3ftW x 4ftT in size. I did not push this lead to the end because I was alone, my only light was flickering on and off, and the passage was beginning to get really muddy. Eeewwwww!

The bottom NNW-SSE passage appears to be the top of a formerly larger route. I believe it has been largely filled in by erosion from surrounding farmland. Its sediments, walls and ceiling are coated with a thin, black, organic mud that may be more recent sediments plastered on the cave’s surfaces after the surrounding farmland became overgrown by small trees. I’d estimate the total length of the cave to be appx 200ft. We obtained a GPS location for it to turn in to the Florida Cave Survey.

This cave has an interesting secondary deposit reminiscent of scales. I believe the formation is composed of a background of black, organic mud on which is superimposed a scale-like pattern of fungal or other microbial structure; hence the name Mud Scales Cave.

The entrance to this cave and the more cool and moist locations of the exposed bedrock and boulders are covered with ferns and wildflowers. The most interesting flora to me are the ferns. I watch for ferns and other primitive plants at cave locations because the microclimate and alkaline soil and rocks ordinarily host several species of ferns. Commonly found ferns include woods fern (Thelypterus kunthii?) and ebony spleenwort (Asplenium platyneuron), and these do grow here.
Moving uphill from Mud Scales Cave we found several sinkholes that are plugged with dirt and rock, one of which was also the repository of farm trash including fence wire, concrete rubble and roofing tin (photo 11). Digging here might gain access to the cave below, or it may not.

More importantly, however, is the abundance of three other fern species that I only very rarely see at north Florida cave entrances. These are tentatively identified as abcissed spleenwort (Asplenium cristatum) (photo 7), cretan brake fern (Pteris cretica) (photo 8 – 5-fingered) and creeping maiden fern (Thelypteris reptans) (photo 8 – more numerous). The latter species is classified by the State of Florida as endangered. It is always way cool to find a rare species at a cave entrance, but to find three rare species is unreal! Thank you, oh great Fern Spirit.
The most important plant to Brack, however, is the heartleaf nettle (Urtica chamaedryoides) (photo 9), which has stricken him several times recently, including on this day. It appears to have eighth-inch spines composed of crystal urtic acid, which forms blisters that sting and itch for a day or two. Yeowch!
Live Oak Log Pit (photo 10) steps down from the entrance at least 30ft. I entered it by chimneying down to the detritus covered floor seen in the pic, then squirmed down through the dark spot to the left of the log into a joint-controlled room about twice as large as the entrance pit depicted. At the bottom of that room was another squirm hole with a pointy rock making the climb-down an ordeal for another day. Bring a sledge hammer! This pit drops at least 30ft, and may connect to Mud Scales Cave.

We headed back out of the woods, and when I returned home there was a message for me from Karen to meet her at a Gordon Lightfoot concert at the Phillips Center. We got rush tickets for $10 apiece. His mellow voice and music were just what I needed at the end of a long day of biking and caving and fern-watching in perfect Florida winter weather. Oh, and my stock portfolio went up 3.1 percent, too. It doesn’t get any better than this!
Posted by Buford Nature at 3:18 PM