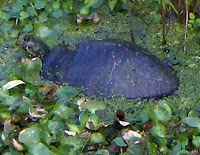 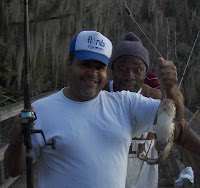 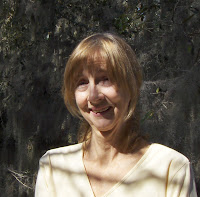 Karen and I went to the south side of the Payne’s Prairie State Preserve to enjoy this glorious Florida winter day (Sunday, Feb 17, 2008). The sky was a nearly cloudless blue, the temperature in the high 70s F and the wind a cool and breezy 10 mph. It doesn’t get any better than this!

We first went to the south edge of the Prairie where the park service has erected a 3-story observation platform right at the edge of the tree line. Fortunately, the tower is not absolutely solid, so it wobbled and swayed as people climbed the stairs, kind of like being in a tree.

We spent some time watching birds soaring over the prairie, mostly vultures but also a couple of red-shoulder hawks. I saw one harrier floating just above the marsh grasses, a phoebe, a small flock of (tree?) swallows circling over a small pond, and one quiet crow. I bet you didn’t know crows came in ones, or that they could be quiet?

Then we turned around and looked into the evergreen forest canopy for a while, especially at the resurrection fern and Spanish moss on the live oak limbs. I was reminded of the times past when I would climb (arboresce) into the canopies of large, old live oaks, sit down on their brontosaurian limbs and eat a sandwich, drink a glass of red wine and listen to the incredible rock and roll band playing fantastic music in the small black church a quarter-mile away.

When live oaks begin to reach maturity, resurrection fern and green-fly orchid form nearly continuous carpets of greenery on the top and sides of the limbs, anchored by roots and pseudoroots that force their way into the oak’s bark. They are fertilized not just by nutrients in rain but also by manure from numerous critters – squirrels, birds, anole lizards, rat snakes, tree frogs, caterpillars, raccoons and even mice. Sediments are brought in by wind and decomposing oak leaves round out the substrate such that a soil, or something that looks very much like a soil, replaced the outer bark of the oak.

By the time the live oaks attain old age, two-and four-legged wildlife migrating along the tops of the limbs have trampled a path thru the epiphytes so that the limb in cross section looks much like a bald man with a lateral fringe of hair and lamb chops. It was a fine old thing for a young man to discover!

Conversely, the picture of Karen in the sunshine is against a backdrop of Spanish moss that takes hold out at and near the ends of the oak’s branches.

Leaving the observation tower, we walked out the semi-paved levee-trail to the edge of the nearly dry prairie. We are in a drought, so much of the prairie is dominated by pigweed, dogfennel and grasses. This time of the year they are dry and boring, so we took no pictures of it. Instead, we walked back to a picnic area where a bunch of folks looking up into the trees caught our attention. It turned out to be a bald eagle sitting placidly on a pine bough, occasionally preening its feathers.

We got out our picnic basket and made sandwiches, drank Sprite, and desserted on Tootsie Pops. Then, noticing that the eagle had left, we looked around and suddenly spied two eagles in another pine a few feet away, and then spotted their nest beside them. Just then a third bald eagle flew over. A three-eagle day for Karen! I had seen another eagle when I was driving earlier to the park, so it was a four-eagle day for me. No big deal, just another Florida winter day. Yawn...

The substrate of this habitat is a layer of nutrient poor, fine silica sand appx 18 – 24 inches thick overlying a nearly impermeable “hardpan” of dark brown fine sand that is cemented together by iron- and other metal- oxides. Consequently, in rainy seasons it is very wet and in dry seasons it is very dry. Pond pine and a myriad species of shrubs and wildflowers are adapted to these alternating wetland and desert conditions.

Here we spotted dwarf blueberry and highbush blueberry blossoming, along with a few species of wildflowers. The most interesting of the latter to me were a white-flowered species of butterwort (Pinguicula sp.). This plant is carnivorous, trapping tiny insects in its sticky glandular leaves and digesting them for nutrients. Hey! Where else is it gong to get nutrients in this acidic sand habitat?

Our next stop was at the edge of Lake Wauberg, also within the preserve, where a short boardwalk was being used by fishermen hunting catfish. You can see two happy anglers holding up a pretty good sized brown bullhead (Amieurus nebulosus). They had caught five of them on chicken livers. There, we also saw the fellow in the watch cap catch an 18-inch mudfish (Amia calva), which is a relatively primitive fish that most people, including him, throw back into the water.

I have met very few people who say they have eaten mudfish, and Mr Watchcap is one of them. He says the meat is soft, so he grinds up the meat and mixes it with corn meal, chopped onions, milk and scrambled eggs and deep fat fries them like hush puppies. He has also eaten gar, which, although hard to clean, has firm meat like grouper. Hmmm, I think maybe I’ll just have to try a gar for dinner next time I snag one.

We also saw a few turtles off the boardwalk. One might have been a softshell (Trionyx ferox), but the others were cooters (Chrysemys sp.). I posted a pic of one of the latter.

After all that wandering around we headed off to a roadside pizzarea for food and drink. A fine day was had by all.
Posted by Buford Nature at 10:00 PM