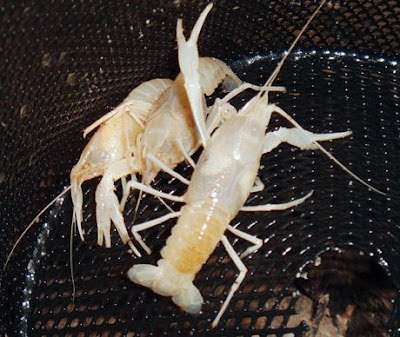 In Per-Columbian times, North American caves were seldom visited by humans, especially those with vertical pit entrances. Animals that require cave habitats for survival (troglobites) pretty much had the caves to themselves. Some epigean (living above ground) critters occasionally fell into pit entrances and couldn’t climb out, and so died and became food for cave animals. (Photo of Procambarus pallidus in Deathtrap Cave, Florida, by Danny Brinton).
Likewise, rainwater was clean and unpolluted, and either streamed in bringing epigean invertebrates and detritus that served as food to troglobites, or percolated down through porous soils to provide the mechanism to create rock formations like stalactites, stalagmites and gours.
But now the streams bring in trash and dissolved pollutants, often forcing aquatic troglobites to live further from cave entrances and their critical food sources. Humans also draw down aquifers, which can dry up subterranean pools altogether, eliminating both habitat and species. We build gates on cave entrances that all too often prevent animals and detritus from entering the caves, and vandals now roam the nethermost corners of caves in order to deliberately kill troglobites.
The result is that many caves no longer harbor the bats and cave-adapted blind, albino fishes and crayfishes that they once did. In some instances, troglobites are even going extinct. Such losses of biotic diversity is not only of concern in itself, but the “library” scientific information contained within troglobitic populations being destroyed is non-renewable.
But there is hope! Cavers are increasingly successful at convincing governments to legislate protection for cave resources. Cavers conduct trash cleanups within the cave and outside of it. Society is slowly cleaning pollutants from industrial effluents. We are learning how to construct bat- and detritus-friendly entrance gates. We are buying caves and stewarding them. We are establishing trails in the more popular caves to keep floor damage to a minimum. We are making a difference on many speleo-fronts.
But we still have more stewardship to develop. For instance, on caving forums we read that well-meaning cave explorers are rescuing epigean animals from caves. This is largely a mistake that should concern all cave resource conservationists. Epigean animals trapped in caves are among the most important food sources of many troglobites. Stream-borne detritus provides an episodic infusion of small invertebrates, but this food source is generally small, unpredictable, and typically of low caloric value.
A fox or snake that falls into and then dies in a cave, however, can provide high energy meals to numerous troglobites over a several-week period. This nutriment is stored in fatty tissue and can sustain them for months or even years, along with the more frequent detritus and invertebrates, until another vertebrate windfall comes along. Some troblobites may not reproduce unless and until a large animal drops in and dies. Denying troglobites this critical food source thus represents one more significant stress on cave animal populations.
Troglobitic crustaceans (crayfishes, isopods and amphipods) have thus evolved relatively slow metabolic rates and long lives. Although epigean crayfishes live only 3 to 5 years, some troglobitic crayfishes are known to live for decades and suspected to live in excess of a century! It's one thing to splat a bug on the windshield of a car, but a hundred year old decapod is a being that we should respect. So, when we rescue an animal that Darwin would have written off as stupid or unlucky, we are taking food from the mouths of cave organisms.
Now, I am the first person to say that we should give imperiled species every second chance that we can. If I find a short-tailed snake (Stilosoma extenuatum) or a Barbour's map turtle (Graptemys barbouri) below a cave pit entrance, I'm certainly going to try to rescue it. But the species that I read about cavers rescuing are almost always common species like garter snakes, bullfrogs or dogs. I maintain that we have plenty of those common critters and that we don’t need to save any of them. It’s the cave animals that we need to save.
So please, the next time you see an animal that is too stupid to watch out for a pit underfoot, leave it in the cave. Your epigean wildlife populations will be more fit. Your cave ecosystem will be healthier. Your cave crayfishes will thank you and your cave millipedes will be ever so grateful, and your biospeleologists will wonder why there are more troglobites in that cave than they ever saw there before.
Posted by Buford Nature at 3:43 PM