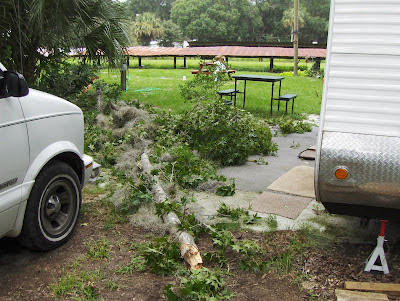 We had a bodacious thunderstorm here on Orange Lake yesterday. It may have rained a couple of inches or more in about 2 hours. The storm was pretty big, as it extended at least all the way to and across Gainesville 15+ miles away. A mighty wind preceded the rain for about 15 – 20 minutes, I estimate at gale force or nearly so. Evidently, the wind circled the perimeter of the storm, as the strong wind was unwavering. I went outside and reveled in its power.

The photo above shows a limb that fell out of a sweetgum (Liquidambar styraciflua) tree during the thunderstorm. As you can see, it fell right spang amongst my RV, van and bonsai dahoon holly (Ilex cassine). Nothing was so much as scratched, say “Hallelujah!” Fortunately, I had put away the RV's awning just a few minutes before the limb fell. The limb was about 5 inches in diameter at its proximal end, and heavy enough that it would have ripped the awning's fabric and folded its frame. Whew!