This morning’s short walk around the yard produced a couple of nature observations worthy of historical documentation. First out of the box was a turtle. No, not a box turtle, but a striped mud turtle, Kinosternon bauri, looking muddy and knackered, possibly blind in the left eye: 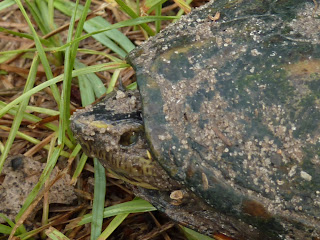 Judging by all the dried dirt that covered her, I think she was headed back to the water after laying a load of eggs. She was so tired that she protested not at all when I stopped to photograph and handle her. That was a bit surprising, as a little mud turtle can be feisty. Looking closer, it was evident that the dirt on her body was dry despite the long soaking rain yesterday evening and last night. All the bare dirt in the yard is a sandy clayey organic mud (former lake bottom) that is very hard when not moist from rain, so her nest must be in a dry, sheltered place. I’m guessing it may have been under my RV or that of the neighbor.

I do not normally handle turtles out of respect for their personal space, and because they can claw blood and bite the crap outta ya, but she was headed for a fall – literally – her direction would have taken her over a 5 ft vertical bulkhead to crash down on a creosoted timber. That would have been bad for any small turtle at any time, but in her condition the fall could have stunned her long enough for predators or even ants to take advantage of. I released the turtle directly into the water instead.

Then I moseyed over to a blooming Aloe vera and spotted three green treefrogs, Hyla cinerea, sitting motionless among the flowers. Here is one of them, along with scads of some kind of tiny, unknown insect, perhaps an aphid: 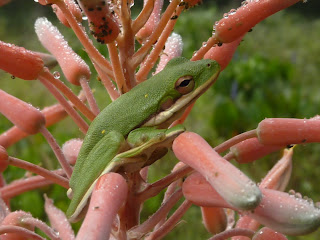 This aloe flowerhead is out in the open where it will soon be bright, hot and dry, so I imagine the treefrogs will head for darker, moister places shortly. By day, lynx spiders hang out on flowers waiting for pollinators to make themselves available to prey on, and by night treefrogs occupy the ambush niche. We must plant more flowers.
Posted by Buford Nature at 10:50 AM