Sunday bicycling around the north side of Orange Lake

Tuesday I wrote about tievine, a wild morning glory growing around the perimeter of Orange Lake. That morning tievine bloomed en masse just off the causeway extending out into the lake marsh. It had saggitate leaves and its blossoms were 3 inches in diameter, and I mentioned that the leaves varied in form to include a heart shape, too. This morning a few yards away from Tuesday’s mass bloom there was another mass bloom of tievine, but this time the leaves were heart shaped and the blooms were very small, about an inch across. When researching tievine Tuesday I learned that a single gene is responsible for smallness in the morning glory family, so evidently the same gene that makes this patch of tievine have small flowers is the same gene responsible for small flowers in cypress-vine and quamoclit: 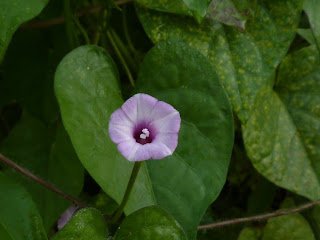 It is interesting that the small- and large-flowered forms bloom separately but only a few days apart. Is this speciation in action or just individual variation on nearby plants? Parsimoniously, I bet the latter.

Not having had any real exercise for the last week, I girded my loins for a long road and trail bike ride and pedaled off through McIntosh, Boardman and Edmiston, headed north to the River Styx and then a little further to Grove Park Wildlife Management Area (WMA) on the NE side of Orange Lake. Along the way a grass spider (Agelenopsis sp.) with its stand-out funnel web caught my eye: 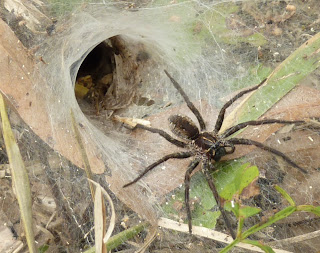 Possibly, there was another, smaller spider that came out when I was photographing and then ran back in before I could get a look at it. Moving on, I was apprehensive as I approached the WMA parking area, but was relieved to see no parked vehicles. That meant hunters had knocked off for the morning and would not return until late afternoon. In I went, wearing a dull yellow shirt. It looked like much of the upland pine flatwoods habitat had burned a year or so ago, reducing here and eliminating there the shady planted pine canopy long enough ago that native wildflowers were bustin’ out all over. I have mentioned before my admiration for pine flatoods wildflower richness, and this example of it did not let me down. I do not know this wildflower, but it was common in the flatwoods and was a clear favorite of the butterflies: 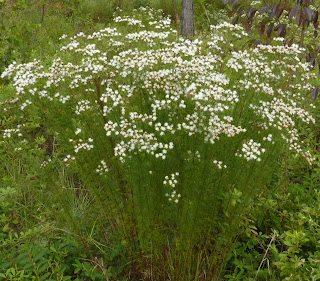 Whatever it is, other pollinators love it too. Here is a close-up of the flower head: 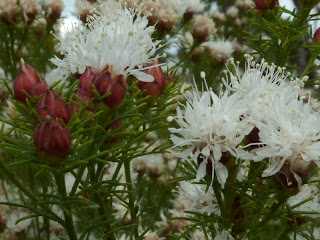 Here’s another pic of the flower head, but this one has a cool shot of a Gulf fritillary, or passion butterfly (Agraulis vanillae), feeding with proboscis extended: 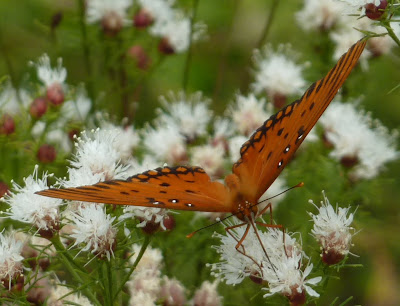 But the standout of the flatwoods today was blazing star, or dense gayfeather (Liatris spicata), because it was truly abundant everywhere in the uplands and along the graded dirt roads: 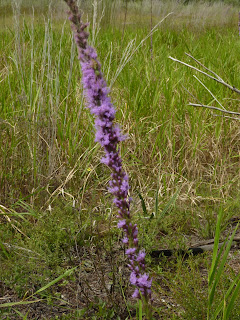 Its showier sister species, pinkscale gayfeather (Liatris elegans), was occasionally seen, and a third sister, deer tongue or vanilla leaf Liatris odoratissima), was locally abundant. Its vanilla fragrance can often be smelled as you pedal by.

There were many more wildflower species blooming, of course, like a white-flowered rose gentian (Sabatia [difformis]), meadow beauty (Rhexia sp.), and a white-flowered “yellow-eyed grass” (Xyris sp.). The trip was a little more than 22 miles long, mileage-wise being mostly on paved roads, but considering time and exhaustion factors it was the WMA that did it – and my knees are killing me! You will push your pedals nearly every step of the way for the mildly soft sand and moderately high bahia grass on the dirt roads. Oh, and stay on the dirt roads, as the woods are furrowed, stumpy and wracked. I got out just as three hunters were coming in for the late afternoon hunt, though – perfect timing!
Posted by Buford Nature at 9:52 PM