The San Felasco Hammock Preserve State Park was the choice for Friday’s bike and hike. Bruce was recouperating from a bout with the flu, so we got a late start and only wandered about 9.5 miles that day. Using the GPS, existing bike and horse trails, and a variety of maps (topo, Google Earth, park trail maps), we were able to fill in some more of the puzzle (to me) that is the karst valley that ends in Sanchez Prairie. San Felasco is a special place that I never tire of exploring. It may be the closest thing around here to a large area of mature, natural vegetation spread across the transition zone between the impervious Northern Highlands and the karstic Newberry Plain. San Felasco also has small pockets of true “Old Growth Forest” if you know where to look. I know some of them, and continue to look for others.

San Felasco is pretty big for day trip explorations on foot, horseback or bicycle (no overnighters allowed - but maybe along the Florida Trail here?). The karst valley we are trying to tie down is smack in the middle between the north and south entrances to the park, there are no roads to it, the only trails to it are horse trails that bicyclists aren’t supposed to use, and the topography has a lot of ups and downs. In a nutshell, it is an aerobic little adventure to get there and another to come back, but they’re good ones. IMO, the trails are as challenging as the trails of the nationally renowned Santos Bike Trails Area, but are more scenic at San Felasco and are paths less traveled. The trails at Santos are on severely impacted property supporting raggedy early successional pine and hardwood forests plus old abandoned barge canal segments plus spoil piles and borrow pits and the like. It’s a great place to ride on red trails, though, and certainly more appropriate than San Felasco for ambitious, healthy mountain bikers who are not naturalists. Some of the trails at San Felasco are within early successional forests, too, but most of San Felasco’s trails run through mature hardwood forests or even older growth climax hardwood forests. Plus, the slope forests along the northern edge of Sanchez Prairie have that oak-beech look without the beech, but we can imagine…

On Saturday, Bruce, Brack and I did a bike and short hike trip at the Half Moon Wildlife Management Area in Sumter County, FL. The property encompasses 9,480 acres in the southeast corner of the confluence of the southern Withlacoochee River and Gum Slough. We got a late start on this 12.4-mile ride due to first attending an environmental expo in The Villages. We biked the main limerock road from the parking area at the northern end of CR 247 northward about 4 miles to Davies Road, intending to ultimately stand at the edge of Gum Slough Creek. There is a dirt road through the woods between and roughly paralleling the main road and the river-slough floodplain that would take us back to the parking area. We had intended to return via that route, but at that late hour it would have resulting in a death march along an unkempt road through hordes of ‘skeeters after dark. Nope. Didn’t.

Along Davies Road, we found a relatively easy route down into the Gum Slough floodplain where we stashed our bikes and hoofed it downhill. We almost made it to an eastern braid of the stream, but elected to keep our feet dry. This floodplain is not very level, but rather is crisscrossed with flood channels, natural streamside levees and natural rounded and elongated hillocks. Wet areas closer to the stream braids are dominated by mostly deciduous hardwoods like red maple and swamp tupelo, but we saw at least one pretty large sweetbay (Magnolia virginiana) almost 3 ft in diameter. The higher elevations supported a mature mid-successional mesic hardwood forest while intermediate elevations were dominated by a semi-evergreen hardwood forest dominated by live oak (Quercus virginiana). The latter habitat is also called “low hammock,” and is my favorite woods that we visited that day.

This low hammock is dominated by “too much” live oak, if there is such a thing. I say the former because it might compose over 50% of the overstory canopy, and I say the latter because live oak is a special tree. Driving down the highway you can see scads of live oaks out in Florida’s horse pastures. Their enormous 6-, 8- and 10-ft diameter trunks rise about a dozen feet off the ground and then multiple brontosaurian-necked limbs soar up and out and swoop down and spread out to form a hemisphere of photosynthesis a hundred feet in diameter and half that in height. Their limbs and trunks will be partially coated with resurrection fern and Spanish moss will cascade from their branches. If abandoned, that pasture will grow up into a forest dominated by those hemisphaerical, “open-grown” elders. You walk through that forest and think you are in an ancient copse because of the mightiness of their trunks, but in many cases they are less than a hundred years old, so don’t be fooled! The next step in the successional trend of the forest is exemplified by the low hammock habitat along Gum Slough, which you can see behind the below-pictured live oak: 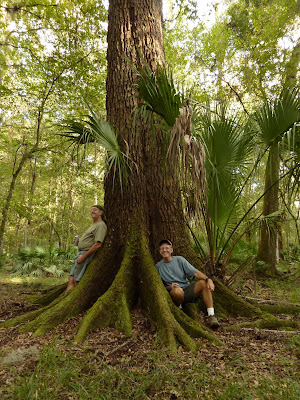 Look at the form of that tree. Obviously, it is not a hemisphaerical, open-grown tree. That trunk rises almost straight up for about 45 feet before it first branches, and the trunk at that height is about 3 ft in diameter. This is a forest-grown tree, one that got its start in a small clearing that was created by a tree dying there long ago, allowing sunlight to reach the mature second-growth forest floor to energize the live oak of today. Notice the trunk is covered near the ground by bryophytes (true mosses). If you could see the limbwork high over Bruce’s and Brack’s heads, you could observe that resurrection fern and Spanish moss have been joined by several more epiphytes like ball moss, Bartram’s moss and several other Tillandsias, plus two orchids, the green-fly orchid (Epidendrum conopseum) and Tampa butterfly orchid (Encyclia tampensis). In truly old-growth live oak forests, there are more species of trees in the overstory and live oaks have a much higher density of epiphytes, at least in low hammocks.

The next time I visit Half Moon, and I certainly intend to, I will take the woods road and go looking for karst outcrops along the river and slough floodplain and its edge. Let me know if you want to go.
Posted by Buford Nature at 1:04 PM