Shoal Pond in Big Shoals State Park was what Bruce suggested this morning. I was surprised but pleased, as I had been trying to get him and some other woods buddies out there to show them some of the things I think I remember seeing 20+ years ago. My small environmental firm in the 1980s was contracted to make a pilot study of 6 properties that the water management district (WMD) had bought with conservation funds. Our findings were to be used to plan follow-on ecological surveys for several dozen more tracts along the Suwannee, (northern) Withlacoochee and Alapaha Rivers. I even got to name a natural Florida habitat type, “Suwannee Scrub,” which is known only from Withlacoochee and Suwannee River floodways.

It was an exciting prospect for me and my young company, and as it turned out several of the tracts chosen for the pilot study contained superlative features. The enormous water hickories and cedar elms near Wannee, for instance, are to die for or at least cry for. I remembered Shoal Pond as a large wetland with complicated floodplain-derived and karst-modified terrain. I remember a bog forest that would exhibit pressure waves at the ground surface when jumping up and down on it. It was remote, trails didn’t go near it, and visiting it was for the hard core. Well, ahem, we are the hard core, but we weren’t on today's 11-mile track. Yesterday’s 15-mile bike and hike put a drogue on me, and Bruce was dragging too from vestiges of the flu.

The main trail system is a loop, which we biked counter-clockwise starting at the Little Shoals Entrance to the park. The blue trail is well marked and runs through varied forest types ranging from xeric uplands to pine flatwoods to floodplain. Some of the flatwoods habitat looks like excellent red-cockaded woodpecker foraging habitat. Part of the trail is along the Suwannee River on the crown of the natural riverside levee, thru saw-palmettos and gnarly xeric shrubs. From the levee, you can see the river on one side and an extensive flatwoods on the other that has been burned within the last year or two. The pines in the burned area are now dead snags, and it looks like a woodpecker’s paradise: this tree is a grocery store, that one for a nest cavity and the one over there to drum on. Was this an uncontrolled fire? Bark beetle outbreak? Hurricane damage?

The trails we traveled today were in pretty good shape except for a few that had been recently disked and turned into fire lanes. I don’t know why some people think it is ok to call a fire lane a bike trail, unless they are deliberately trying to be mean. Disked fire lanes are sandy wallows, are hard to maintain a bike upright, have innumerable stobs to jar the cartilage out of your joints and are neither fun nor exercise. The disked stretches are located far enough along the trails that you feel committed to the direction you are headed, and you hope the disking is just for a short way, so you persevere. Why doesn’t management place a notice on the kiosks advertising that a bike trail has just been disked? They have several kiosks up with lot of educational information, plus maps and booklets, so adding warning notices would be easy.

Anyway, moving on, a side trail led down to the river and this strange thing: 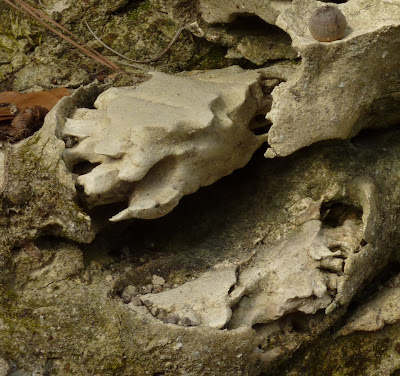 I think it is a fossil, and is in 30-odd million year old limestone. It looks to me like a shell covering interior structures. I have forwarded the pics for identification to an invertebrate palaeontologist friend who works at the Florida Museum of Natural History in Gainesville. It is relatively easy to access the river in a number of places, especially at the two shoals. The river’s level is down such that Little Shoals and Big Shoals are pretty rocky. I’d judge the Big Shoals to be a bumpy grind for any canoe or kayak right now, altho Little Shoals is a swift, neat little paddle. There were half-dozen small groups of people out there, but the place is large enough to ensure solitude.
Posted by Buford Nature at 10:15 PM