I got an early start today, arriving at the San Felasco SP bicycle trailhead and scooted off about 0930, following Cellon Creek trail to the power line and southward. Always before I have passed the barn where the dairy used to be, but this time I veered west a little to check it out and the large sinkhole close by. The sink was dry and without any limestone showing, but they say there is a barn owl in the barn, and I spotted this 2m yellow rat snake on a log nearby: 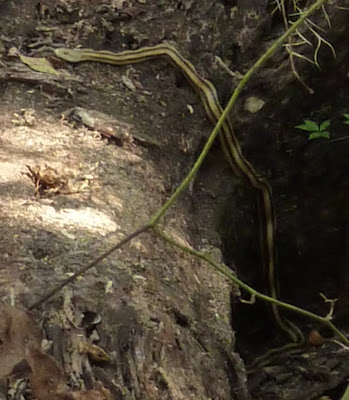 I thanked the snake for letting me see it and warned it about the owl, and then headed on southward following a bike trail thru an old field growing up in young loblolly pines and sweetgums, and Spanish needles (Bidens pilosa) galore. My pants and shoes, and exposed socks, snagged quite a few of their centimeter-long, half-millimeter wide seeds that have two 3-mm retrorsely barbed spines on one end. The spines stick into clothing and then the barbs start ratcheting the needle deeper into the clothing when you move, and soon you are being jabbed by few little needles here and a few more there. You stop and pick the worst of them out, being thankful for the short rest, and then move on.

Down the Tung Nut Depot trail, I rode thru a beautiful deciduous hardwood bluff forest to the north edge of Sanchez Prairie west of the powerline and stashed the bike. Now for the real fun - moseying. I walked pretty slowly counter-clockwise along the edge of the big wetland polje, with the bluff forest on my right. Coming to the northwest corner of the ponded water, I walked to within less than 10 meters of a nearly 3-meter alligator because I didn’t see it. I was looking upward at a flock of migratory yellow-rumped warblers that were being scolded by local Carolina wrens and Carolina chickadees, and I guess the big ‘gator figured it wasn’t in too much danger, for it only slowly did a U-turn in its muddy slide and languidly slithered into the water under a floating mat of frogbit. There are times when I’m glad we don’t have top carnivores like lions and hyenas around here. I thanked the ‘gator and moved on.

I explored the uplands to the west of Sanchez Prairie. Boring young pines and such, they are, and the patch of Spanish needles of the world! Oh, man, I came out the other side with major needles stuck below the belt. They were burrowing thru two layers of socks into my ankles, so I had to take 20 to pull them off. Mr. GPS then logged more sinkholes and ravines while walking back to the prairie’s southwest corner. There was a family of feral pigs, a sow and 6 young ‘uns just uphill of the prairie in a moist ravine. Check out this hog wallow in a seepage spring creek: 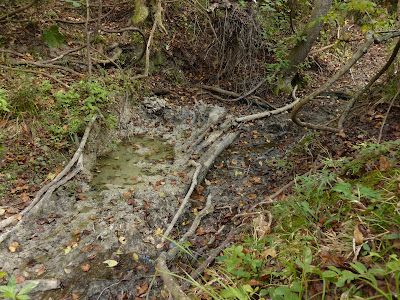 I am in awe over the huge amount of wildlife I saw today. I am going to list it and you aren’t going to believe it. There were two yellow rat snakes and two alligators. This smaller ‘gator is only about 2 meters long:

I ran across 4 or 5 (they backtrack and confuse me) families of feral pigs, each having 5 – 7 members. They forage mostly on moist to wet ground around the prairie’s perimeter and up the centers of larger tributary ravines. Here is a photo of the edge of a pond within the prairie: 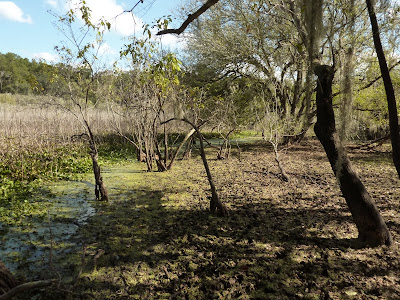 Notice a couple of things here, first the countless pig tracks in the mud just up from the water’s edge. Second, there is a meter-wide open waterway between the mud and floating frogbit. Can you see the alligator track on the left, moving away from the camera and then cutting left into the vegetation? That waterway at the water’s edge is maintained by alligators slowly moving around at the water’s edge. You know what they say? “Don’t turn your back to the water!”

Along the edge of the pond where numerous small tree trunks <15 cm diameter emerge thru the stagnant, duckweed-covered tannic waters there were wood ducks. I don’t know if I was just flushing the same few repeatedly, like egrets flush while you’re canoeing down a river only to land a few hundred meters downstream where they will just flush again, and again, as you continue to float down. Otherwise, I might have seen 75 – 100 wood ducks in the space of a half-hour. Then the dickey birds were everywhere, and blackbirds were massing in an open-canopy part of the wetland forest where 3 destructive hurricanes came thru here several years ago. This picture will give you some idea of the damage the ‘canes did: 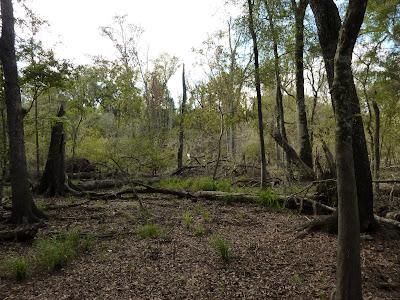 I doubt I have ever seen so many whitetail deer in a single day in my life. Did I see 50? Did I see 100? I never did start counting, but here are 3, there are 5, around the next bend are two groups of 4 and 5, and on and on. You know what you get when you don’t hunt big animals? You get deer all over the place, and they are sort of tame, too. If my path took me directly toward one, it would casually bound a few steps to the side and then stop, chow down on something green and then flick its ears at me, but they were not afraid. I just walked on by them, pointedly not making eye contact.

You also get pigs all over the place when there’s no hunting. The pigs would snort and stampede when they caught wind of me a few meters away, but when I neither chased nor shot at them they would stop, turn and face me, and watch as I walked on by. They never mess with me, pigs. Smile for me the next time you hear a beerbelly counting coup about how a hawg attacked him with “tushes THIS BIG!”

Oh, I almost forgot: Do you know why there was so much wildlife out there today? Acorns. Everywhere around and within Sanchez Prairie above the waterline is dominated by oaks, mostly diamondleaf oak (Quercus laurifolia), but also shumard oak, swamp chestnut oak, water oak and live oak. The bluff forest also has abundant pignut hickories that are dropping a moderate hickory nut crop this year. Wood ducks, feral pigs and whitetail deer depend heavily on mast (nuts) this time of the year. It is a seasonal crop, and perhaps they come from all around the nearby countryside to harvest the bounty that Sanchez Prairie has to offer. I know I do, thank you.
Posted by Buford Nature at 10:10 PM