Yesterday, I returned to San Felasco State Park with Bruce for a 10.3 mile bike and hike to nail down some karst features that are impossible to locate from topo maps and aerial imagery, and to have some fun. Blues Creek heads up just north of Millhopper Road in Gainesville, FL near the SE corner of the park. It drains surface waters during wet seasons and is kept wet by discharge from seepage springs during most of North Florida’s dry seasons (spring and fall). Blues Creek travels north from its origin through a moderately steep ravine dominated by a mature forest composed of mixed, semi-evergreen hardwoods. Shade from the forest canopy that the creek is embedded within is so dense that most of these woods have little brush, giving a park-like ambiance to the area.

Parallel to Blues Creek for a short distance is a karst valley that I will call Blues Trace until I learn what FDEP calls it. The valley is really a ragged line of deep, steep sinkholes that pond water up in serious or quickly-repeated storm events. This is one of the longer and deeper sinks, with Bruce for scale: 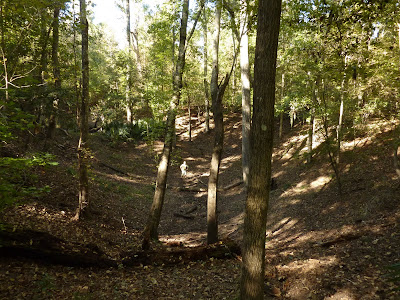 Blues Creek travels northward until it reaches a swamp forest, where it then flows within a wider, shallower, braided channel clockwise around the south side of the swamp. There are at least two blind valleys that extend to the south and west off the creek channel beside the swamp. The eastern blind valley has walls that are steep but climbable if you are healthy, and a floor of wet sand and mud, and logs galore. Blues Creek today runs through the western blind valley and sumps into a series of crevices at the base of the valley’s limestone walls that are too small to enter. Here is a portion of this very beautiful karst valley: 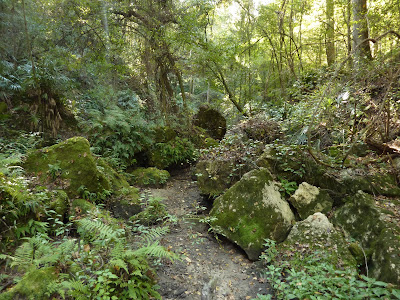 When it come to Florida karst scenery, it doesn’t get any better than that. We saw a 3ft long cottonmouth the last time we were here. Of course, the moccasin never threatened us. I have also seen downy nestling vultures hiding among these rocks several times over the years, and Florida tree fern (Ctenitis sloanei) maintains a small, possibly its northernmost Florida population in this valley (the USDA has records only as far north as Hillsborough County although I have seen it well north of that occasionally). The terminus of the valley has walls that are too steep and clay-slick to climb, and we didn’t want to do that anyway due to its splendid fern cover. You have to backtrack to get out of there. The only other people I have ever seen wandering around waaaay off-trail in the park were a couple of fellow naturalists at this spot. The place is a subtle magnet to my kind.

A major lineament (bedrock fracture) connects Alachua Sink in Payne’s Prairie to Hornsby Spring. Dye tracing has proven that several stream swallets only a mile or two north of this lineament connect to Hornsby Spring via underground conduits. These include Cellon Creek Swallet at the head of the San Felasco bike trailhead, Mill Creek Sink (an NSS-owned cave diving site) and another sink I don’t know the name of that used to channel the General Electric battery plant’s acid waste into the Floridan Aquifer. Sanchez Prairie almost certainly drains into that system – its swallet is almost dead-on the lineament. Blues Creek Swallet almost certainly feeds into that lineament too, as it is also only about a mile north of the lineament. Furthermore, Blues Creek Swallet may make the connection to the lineament via Blues Trace. Unfortunately, the known caves in this part of the lineament’s cave system have ceilings at 190ft to 220ft below the aquifer’s water level and there is plenty of overburden available to plug any solution pipe that might open up along Blues Trace, so it will take a dye trace to answer that question.
Posted by Buford Nature at 12:37 PM